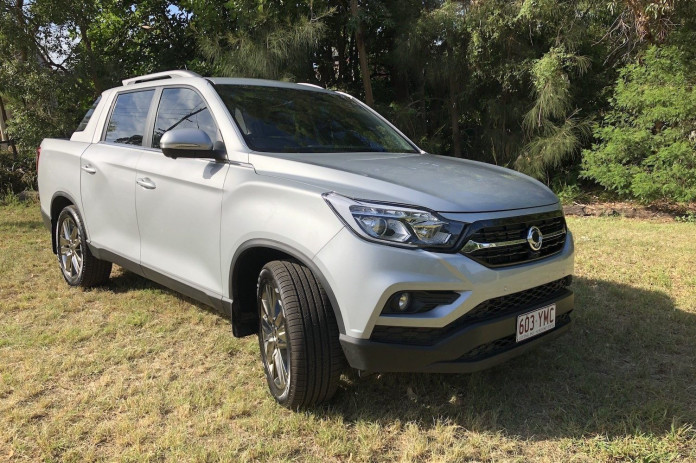 THE last time SsangYong was in Australia, it didn’t end well. But now their back; this time with factory support and a raft of new and seriously upgraded models, including the 2019 SsangYong Musso Ultimate.

SsangYong is Korea’s third largest car maker and their shiny new ute offering is a pretty darn good piece of machinery and comes in at a very competitive price as well, but more on that a little later.

Externally the Musso has had a very good face lift. It looks modern and fits in well with its main competitors whilst still looking individual. It’s also big. It’s the same size as the Volkswagen Amarok and feels like it’s a big car as well.

It looks good in Fine Silver, in the case of our test vehicle, or in Atlantic Blue, Grand White, Indian Red, Marble Grey, Maroon Brown, Silky White Pearl and Space Black, should you not love the silver.

Now that the thought of cool air pumped into the driver’s seat in the peak of summer has sparked your interest, we should tell you it also comes with a 360-degree camera and auto dimming rear view mirror.

At $40,485 drive away for the top-of-the-range, the Ultimate has loads to offer, with a quality interior finish and a lengthy list of tech that includes automatic wipers, all in a package that feels way more expensive than it actually is.

The 8-inch infotainment system is very nice and incorporates Apple CarPlay and Android Auto, but you will have to use your phone as a proxy SatNav. The touch screen feels a little far away from the driver though.

The sound system is excellent too though and there’s an SD card slot for media; now that’s old school. There’s an old-fashioned hand brake that actually clicks a lot when you pull it on, which is oddly quite satisfying.

The driving position is good, with great visibility and blind spot monitoring as well. The rear seats are surprisingly comfortable and there is plenty of leg and head room for taller passengers. Rear passengers also get air conditioning vents.

The back doors are massive though, and while that’s great for ease of access when getting in and out of the 2019 SsangYong Musso Ultimate, we found it somewhat painful in car parks.

If it’s chilly you can always flick on the heated steering wheel as you hit the road. Initially we thought the drive was a little rough, but it’s generally not too bad. At the end of the day, it’s a work horse with luxurious bits. Oh, and it’s got a 3,500kg towing capacity.

But we digress, back to the driving experience. It is surprisingly quiet in the cabin. The 2.2-litre turbo diesel provides 133kW of power and 400Nm torque, and is quite responsive to the loud pedal. There is a little turbo lag though.

Road noise is minimal as you step through the three driving modes; Eco (the default), Power and Winter. Manual mode is a little different to what we expected though. There are no flappy paddles to change gear and you don’t use the gear shifter either.

There is a small button on the side of the aforementioned gear shifter that you use to gear up or down in manual mode.  It takes a little getting used to, but it actually works well. Although it is a little quirky.

Having manual mode and a low range 4WD option makes it very capable off road as well, and with the right tyres and a lift kit, it could serve as a real fun truck. Accessing the 4H and 4L settings is achieved by using the dial near the shifter, and 2WD mode is standard.

The Musso range starts with the EX, in 6-speed manual, from $30,490 drive away, while the auto option adds $2,000 to the asking price. This represents some great value for money when compared to others in the market of similar size and spec.

It is pretty basic, with wind up windows and minimal tech inside but let’s not forget SsangYong offers a 7-year unlimited kilometre bumper to bumper warranty and roadside assistance package.

Step up to the ELX and you get some added toys like blind spot warnings and rear cross traffic alert. While the Ultimate sits atop the range, and gets a sunroof, although the shade cover is manual and doesn’t slide with when you open the glass.

With dual cab utes the star of the Australian car market, the Musso should be well placed to leverage some of those sales, albeit in what has to have become the toughest segment in the Australian motoring landscape.

Overall though, the Musso Ultimate was a bit of a surprise package, in a good way. Good levels of tech, driver and passenger comfort, great power delivery despite a little turbo lag, good styling and value for money. I think we liked it more than we thought we would.

Our test vehicle was provided by SsangYong Australia. To find out more about the 2019 SsangYong Musso Ulitmate, contact your local SsangYong dealer.