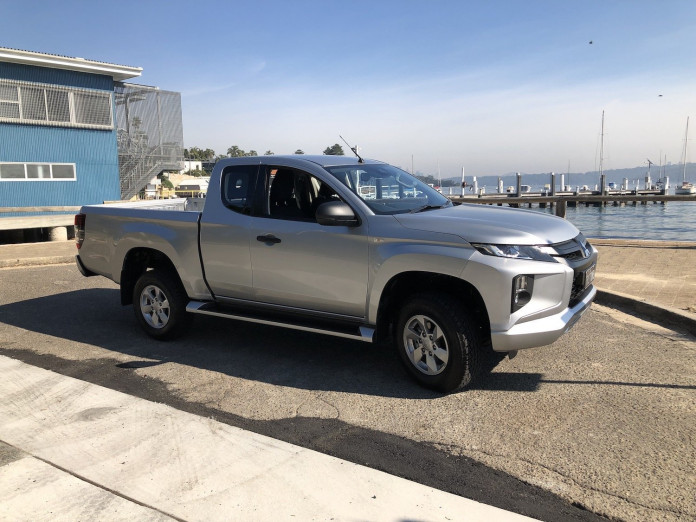 WITH its brutish new look, there’s no denying the 2019 Mitsubishi Triton has had a complete face lift. The soft curves are gone from our GLX+ Club Cab 4×4, replaced with seriously defined lines that make the stalwart ute stand out from the crowd.

Long considered one of the ‘go-to’ 4×4 choices for farmers and tradies alike, the Triton has, in more recent times, joined the Toyota Hilux and Ford Ranger as one of the nation’s top selling pickup options.

That’s mostly thanks to sales of the big brother dual/double cab versions of these three brands, but nevertheless, the Club Cab holds a popular place thanks to its useful rear seat space for either human occupants or gear storage.

We won’t bang on about the outside of the new look Triton too much though, suffice to say it’s astoundingly different from its predecessor, looks more modern than most of its rivals, and is definitely bold.

The new look will polarise ute traditionalists, if there is such a beast, and in its own way, will make buyers choose between something more unique in its look, versus the likes of rivals like the Volkswagen Amarok, Isuzu D-MAX or the Holden Colorado.

Colour options have had a shake up too, with different choices on different models and specifications across the range. In the case of the Club Cab 4×4, these include Sterling Silver (as tested), White, Red, Graphite Grey, Impulse Blue and Pitch Black.

Inside, the GLX+ Club Cab feels very pared back, even a little too basic. There’s no carpet, no adaptive cruise control (although there is cruise control), no leather seats; pretty much no luxuries. In essence it’s a work truck that’s a wee bit fancy.

Now, having said that, the interior is still a very nice place to be. There is a great infotainment system that a includes Apple CarPlay and Android Auto, an excellent 7.0-inch high resolution screen and full Bluetooth connectivity.

There are two USB charging ports and an HDMI port, and a pretty solid 4-speaker sound system. You’ll need a proper key to start her up, but it does have key-less entry. As is standard for Mitsubishi, there’s no SatNav either.

Other goodies it does have tough include rain sensing wipers that are also speed sensitive, and auto headlights with daytime running lights as well. The comfortable cloth seats are comfortable enough for long haul driving and the driving position is excellent.

Tilt and telescopic adjustment options on the steering wheel further enhance your ability to find the perfect driving position, and a reversing camera and parking sensors make this 5.2-metre long ute easy to park as well.

Despite there being a tonne of plastic inside a ute that is clearly targeting tradies who want something a little nicer than a tray back utility, it’s well done, and feels pretty damn comfortable for what it is.

The ‘suicide’ doors for your rear passengers can only be opened if the front doors are open, as is often the case, and for most this won’t be an issue, but it may bother some people, so we’re bringing it up.

As you might have already expected though, the rear seats are not really a place you’d want to be if you were too tall or there was a long journey to be had. It’s a Club Cab, and as a rear seat passenger your face is very close to the head rests on the front seats.

There’s also very little leg room. It’s great if you want to drop a mate home basically, or you have younger people to ferry around on short trips to the shop or to weekend sporting activities.

The 133kW 2.4-litre turbo diesel engine is remarkably quiet and comes with plenty of power to get you off the line or for cruising down the freeway. With 430Nm of torque, and a super smooth 6-speed auto, it’s really good on the open road.

It’s a genuine go-anywhere weekender too, with a very capable 4×4 or 4WD system, whichever you prefer to call it. It comes complete with 4H and 4L options and does pretty well over the rough stuff.

It’s got leaf rear springs and while the driving experience is pretty smooth, the ride is a little rougher than you might expect overall. Among the other downsides to new Triton is the slightly lower towing capacity.

Unlike many of its rivals, who offer a 3.5-tonne towing capacity (let’s not talk about utes towing that much weight because we could go on forever), the 4×4 Triton is rated for 3-tonne of braked towing.

The upside for Triton buyers is a huge amount of tray space, with some 1.8-metres of length and 1.1-metres between the wheel arches, there’s more than ample carrying space for the camping gear or a heap of tool boxes.

We reckon you could just throw a mattress in the back and a tarp over the top, and camp right there in the tray. You might freeze to death in winter though. The 2019 Mitsubishi Triton GLX+ Club Cab makes good fuel economy too, at a combined 8.6-litres/100km.

It’s exceptional value for money as well, with a drive-away price of just $39,990. It comes with a 7-year 150,000 kilometre warranty and 3-years capped price servicing. The Triton also has a 75-litre fuel tank.