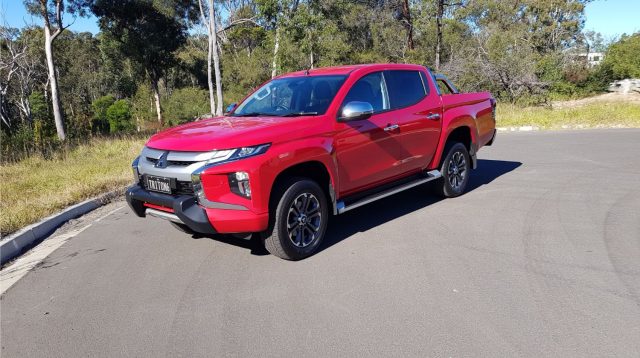 FUNCTIONAL, well equipped, stylish. A genuine representation of the face-lifted 2019 Mitsubishi Triton GLS Premium. With its 5-Star ANCAP safety rating and a host of updated safety and tech, expect the Triton to be the quiet achiever pickup in 2019.

The new Dynamic Shield Design has modernised the Triton’s stance, with sleek LED headlights and day time running lamps up front and a revised front bar, grill and bonnet, with the fresh new look giving it a real Transformers feel. It grows on you rather quickly.

The rear end has also received a makeover with restyled LED tail lamps, body work and rear bumper. That ‘look’ is standard across the massive Triton range that takes in single, club and double cab variants.

These include GLX, GLX ADAS, GLX 2WD DID, GLX 4WD DID, GLX+, GLS 4WD and GLS Premium 4WD. The last of these is what we’re testing here. It’s the top-of-the-line model aimed squarely at competing with the SR5 Hilux and premium editions of the Ranger.

There’s also seven airbags, two ISOFIX child restraint anchor points, reverse camera and rear park assist. Among the best of these is the Super Select II 4WD system, which allows you to manually select your driving conditions with the twist of a dial.

Whether its gravel, mud/snow, sand or rock terrain, the system is ready to alter the way it plays to suit. The rear diff lock is another great feature and engages at low speed (under 6km/h).

With hill decent control, traction control, electronic brake distribution and 220mm of ground clearance, it’s easy to see why the Triton has come to play. And while the power figures haven’t changed, there’s plenty of enhancement to engine responsiveness.

The Triton stacks up this way; 2.4-litre turbo diesel Mivec producing 133kW at 3500rpm and a robust 430Nm of torque at 2500rpm. Fuel consumption figures have improved over previous models, with 8.6-litres/100km achieved during testing.

With a 75-litre fuel tank, you should be seeing 800km between fills. A good chunk of that improvement is thanks to the new 6-speed auto fitted to the Triton which performs seamlessly, offering outstanding throttle responsiveness at low revs.

With the Triton’s 750kg un-braked towing and 3100kg braked towing capability it appears, at least on paper that the Mitsubishi is down on its rivals standard 3500kg towing capacity, but the GVM numbers are better on the Triton, meaning it will actually tow more.

Body styling for the GLS Premium also adds side steps, privacy glass, a nudge bar, tub liner and chrome sports bar. The tub has six tie down points and will take an 855kg payload, which is plenty of bags of concrete for that fencing job.

We did find the infotainment system user friendly to operate and the Bluetooth is crystal clear, but it does forego builtin SatNav. We’ve said it before and we’ll say it again, this is one of our pet peevs.

Leg room for those in the second row is no problem for a 6-foot adult either, with good space in the back. The second row also benefits from two USB outlets, a centre armrest with cup holders, and a roof mounted air circulator.

Door cards come with leather inserts which provide a nice addition to what is, overall, a pretty user friendly cabin. And if you’re wondering what a door card is, it’s the panel that covers the internal workings of your car door (we know, you could have Googled it).

The ride comfort in the GLS Premium is compliant and predictable. The double wishbone suspension (front) and leaf spring (rear) has been tuned by Mitsubishi engineers to give owners a comfortable, effortless driving experience.

Rumour has it that the engineers removed a leaf spring in the rear to ensure ride quality was on point. Good move Mitsubishi. The top spec Triton sits on 18-inch alloy wheels with 265/60R18 tyres that can best be described as suitable, and quiet while cruising.

Of note, even with the big tyres, the Triton does possess an excellent turning circle compared to other utes in the segment. Whilst we don’t have an exact measurement, it’s much better than this writer’s personal truck (an Isuzu D-Max).

We definitely think Mitsubishi engineers and designers have got it right. While refinement isn’t as polished as some at the top end of town, the GLS Premium Triton is a well priced, purpose built machine designed to do a job and do it well.

It’s hard to go past a pickup with plenty of safety features, a leather clad cabin and 3100kg braked towing capabilities. It’s also hard to pass up the $50,990 drive away price, 7-year/150,000km warranty or 3-years capped price servicing.

Our test vehicle was provided by Mitsubishi Australia. To find out more about the 2019 Mitsubishi Triton GLS Premium 4WD, contact your local Mitsubishi dealer.

Triumph Speed Triple 1200 RR designed to get the heart racing