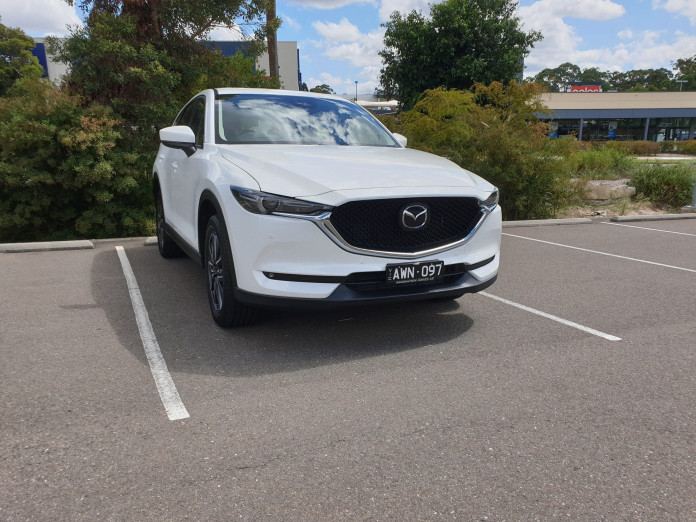 WE once described the Mazda CX-5 as a little bit boring. That was before the Japanese car maker jammed a 2.5-litre turbo power plant under the bonnet to create the 2019 Mazda CX-5 GT, a car that might just be everything a mid-sized SUV should be.

Well almost everything. Provided your happy to pretty much keep it on the black stuff, the new GT variant of the CX-5 is an outstanding offering, with an extensive feature list, a leather interior, and loads of get up and go.

Available in three engine configurations, including a 2.2-litre diesel and 2.5-litre petrol variant, our CX-5 GT test vehicle was powered by the other choice; the 2.5-litre turbo charged 4-cylinder that pushes out 170kW of power and 420Nm of torque.

It’s the pick of the engine options for us, thanks to the extra grunt, and when combined with McPherson strut front suspension and a multi-link rear end, makes for a truly comfortable driving experience.

It’s only available in all-wheel drive and it’s only available as a 6-speed automatic. Neither of those are a bad thing, especially when you consider it also has a 2,000kg braked towing capacity (750kg un-braked) and 150kg tow ball download weight.

Riding on 19-inch alloy wheels also ensures it looks a little different from the rest of the CX-5 family, adding a more sporty feel. Coupled with some exterior design updates, the GT has a real personality.

Mazda claims a combined fuel economy of 8.2-litres/100km but we have to say, we couldn’t even get close. The best we could achieve was a 9.7 and in reality most of our time was spent burning through the 58-litre fuel tank at an average of 10.3-litres/100km.

Inside, there’s a Bose sound system which delivers an outstanding aural experience thanks to its 249-watt amplifier and some 10 speakers, as well as a 7-inch colour touchscreen infotainment system.

That system features the elusive, at least in the case of Mazda, Apple CarPlay and Android Auto, and full Bluetooth connectivity, as well as SatNav, DAB+ digital radio and even internet radio integration with Aha and Stitcher.

And that’s just the start of a lengthy list of standard features and safety tech, not to mention the very nice black leather interior that includes the steering wheel and gear shift (which can also be had in white leather, if that’s your thing).

The front seats are heated, and the driver’s seat features 10-way adjustments and two memory settings, while the front passenger enjoys 6-way power adjustment. There are USB ports and power outlets too, along with cup holders and bottle pockets.

That’s our three biggest gripes delivered on right there. Good spots for cups and water bottles, and somewhere to charge your devices. But the CX-5 GT is more than that of course.

Boot space is a pretty solid 442-litres with the rear seats in the upright position, but lay them flat, and you’ll have 1,342-litres of interior load space. It’s accessed via the power tailgate and there’s also a sunroof to let in extra light or the wind.

The 5-seat SUV, one of Australia’s most popular, boasts a host of safety features that includes high speed autonomous emergency braking (active at speeds up to 145km/h), radar cruise control, driver fatigue detection and auto high-beam.

There’s also lane departure warning and lane keep assist, the latter of which we need to bang on about a little. We don’t like it. It’s overly sensitive for one, and it likes to take control of the vehicle and recenter your position in the lane.

That’s fine, ordinarily. But not when it does it in a somewhat violent manner. The first time it did it was genuinely disconcerting. Sure you get used to it eventually but if you’re a capable driver, we’d actually suggest switching it off.

You also get what you might describe as city speed autonomous emergency braking, which works up to 80km/h and also works in reverse at low speed. In addition to all that, there’s blind-spot monitoring and rear cross-traffic alert.

It comes with a 5-year unlimited kilometre warranty and five years of premium roadside assistance, with the latter made part of the Mazda purchase package from April of this year. Mazda even offers a range of insurance products.