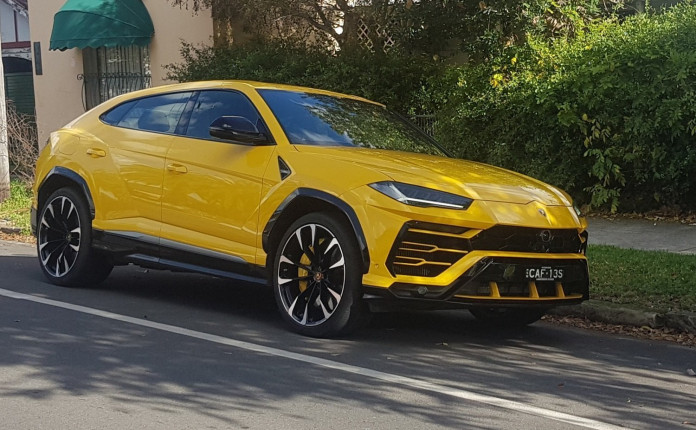 IT’S the mystical unicorn of car brands, a name with so few examples on the road that every single person stops dead in their tracks to look at it as it drives by. Now, pump that concept up on steroids and you have the 2019 Lamborghini Urus SUV.

This is no two-seater sports car or compact SUV either. The Lamborghini Urus is a beast you can take your family along for the ride in, and it even has a decent boot. Yet it still screams “OMG, look at me”, just like the Countach used to, or the Huracan does today.

It might seem unconventional that this is pretty much a high performance exotic bundled into an SUV skin, but let’s face it, everyone’s doing it; Rolls Royce, Bentley, Porsche, Maserati, Ferrari and even Aston Martin.

Everyone needs a monster performance SUV, and some 18 months or so ago, Lamborghini entered the game with the Urus, powered by a 4.0-litre twin turbo V8 producing an eye watering 478kW of power and 850Nm of torque.

All this power is delivered via an 8-speed DSG transmission and four wheel drive system, with a top speed of 305km/h and a 0-100km/h sprint time of 3.6 seconds. We can assure you it really is capable of going that quick.

To fire up the Lamborghini you have to push the start button, hidden under a red missile launcher flap, precisely located in the middle of the centre console. This cluster of cool controls is known as Tamburo, it’s Italian for drum. Yeah, we don’t know why either.

Push the button. Queue the noise. It’s a little bit wow, even when it’s idling, and when you drive it, well. It pops and burbles downshifting and there are plenty of bottom burps as you up-shift. There’s a catch here though.

To keep the noise the way we liked it, full lunatic, it’s pretty much Corsa mode (that’s track mode in English) or nothing. This is the first time turbos have ever been fitted to a Lamborghini, but man oh man, they deliver.

The power delivery is sufficient enough though that when you stomp the go pedal you’ll likely end up in the front seat of the car behind you, having lost your clothes along the way.

Surprisingly, with all that V8 rumble and a hefty weight that tips the scales somewhere just shy of 2.2-tonnes, we managed to get the Urus to consistently deliver 14-litres/100km an hour during regular driving. Lamborghini claims 12.7.

Thanks to the 85-litre fuel tank, a factory option, there’s plenty of juice to keep you going too. That said, stuff the boot through the floor and the solid fuel figures jump to a less attractive 18-litres/100km. But no-one drives like that. Maybe.

We should say, before we get into a little more about what the Urus experience is like, that this is not Lamborghini’s first shot at a heart pumping 4×4. There was once a vehicle known as the LM002 – or the Rambo Lambo to its friends.

Just 382 of these V12 monsters were built back in the 80s, and they are now a very expensive collectors item. There are little hints of that vehicle’s almost military purpose to be found in the Urus too.

And because Lamborghini is part of the Volkswagen Group, it’s also borrowed the best bits of the Porsche Cayenne, Bentley Bentayga, Audi Q8 and Volkswagen Toureg, with hints of influence everywhere.

From the power plant, parts of the interior, and even a fair chunk of the technology, the global development might of the Lamborghini parent family is on show, but in this case it’s been ‘Italianised’ to represent something that is truly unique.

Hitting the road has never felt better, and the Urus rides on a bed of air suspension, offering a nimble and quick ride around town on its $10,428 optional 23.inch diamond finish wheels.

That is until you hit a skinny back street in the city, with cars parked on the curb. It’s then you realise how enormous the Urus is. Our bright yellow beast is some 5.1-metres long and nearly 2.2-metres wide if you count the mirrors.

There’s a bunch of driving modes to suit your mood, and you can customise everything from how the drive-line behaves, the steering feel and suspension. It’s got an off-road and snow mode as well.

Yes, the Lamborghini Urus is built to play in the dirt, but the question is not can it, but would you do it? Sure you can raise the car up, but there’s no transfer case or diff locks and you’re hardly going to bush bash a car with a drive-away price over $400K.

With an exotic supercar meets pure luxury interior, you’re not going to want dirt in there either. It’s superbly finished and extremely comfortable inside.

From the leather piped, double stitched premium carpet mats, to Q-Citura leather seats with massage functionality, the 2019 Lamborghini Urus feels genuinely top notch. So much so we were a little frightened to sit in it, let alone put kids in it.

If you dare to throw the munchkins in though, it does come with two ISOFIX points and three traditional tether hooks for child seats. Children aside, there’s plenty of next level goodness to be had inside the Urus, if you’re prepared to pay for it.

Options, so many costly options, one of which delivers an out of this world audio experience. The Bang & Olufsen Advanced 3D sound system will set you back $11,665 – but it’s worth every cent. AC/DC’s Back in Black has never sounded so good.

It’s a little frustrating that to add DAB+ digital radio to that amazing sound system you’ll have to shell an addition $1,414 though. The need for deep pockets aside, the Lamborghini Urus is truly an amazing experience, both inside and out.

On the outside, the styling of the Urus has drawn criticism for being ugly, some going so far as to call it hideous. But we disagree. The sheer number of people in awe of it proved to us that a car draped in Giallo Auge (yellow) with high gloss black finishes turns heads.

The brakes are eye-poppingly large too, the 440mm discs the largest to ever make it onto a production car. Whopping 10-piston calipers make them look big enough to stop a passenger train, let alone a road car.

The braking performance is ludicrous too. Tap it with your pinkie toe, and your face will be smooshed against the steering wheel, leaving the Lamborghini shield imprinted in your forehead. Okay, maybe not, but damn they work well.

The best way to sum up the Lamborghini Urus is that it’s like ordering a latte, lots of milk and frothy bits; it’s a coffee, but not everyone drinks it. A Huracan for instance is like ordering a double shot of black coffee, a pure super car.

It’s comfortable, fast, handles like a dream with almost no body roll through corners, and it’s possibly even reliable. While the price is out of reach for most of us, it does still represent value for money, when compared to other expensive high performance SUVs.

If you have a spare $390,000 plus on-roads (remembering the options you choose will affect the overall final price), you can own your very own 2019 Lamborghini Urus, in an array of fashionable colours.

It also comes in a couple of very pretty reds. It has a 3-year unlimited kilometre warranty with the option to purchase a fourth and fifth year. A 3-year maintenance package is also available.

Our test vehicle was supplied by Lamborghini of Sydney. To find out more about the 2019 Lamborghini Urus, contact your local Lamborghini dealer.

- Advertisment -
Advertisement
Auto Review: 2019 Lamborghini Urus<strong>Pros -</strong> it's bloody quick; superb ride and handling; next level technology.<br> <strong>Cons -</strong> sheer costs when it comes to optional add-ons; it's very big; has potentially lost some of its identity thanks to German influence.