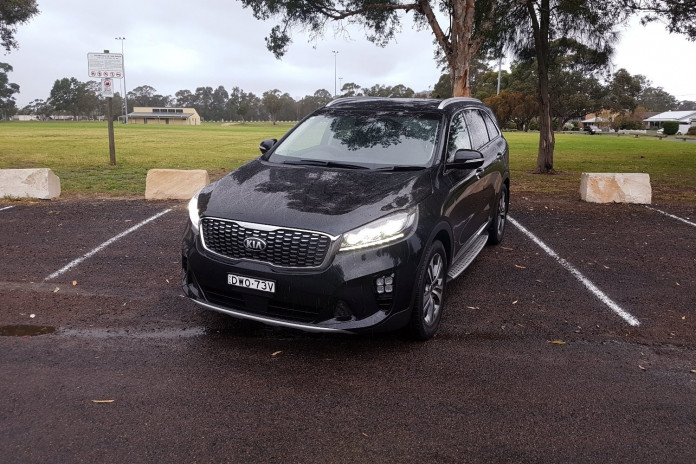 WE’VE said this about a thousand times already, but don’t discount Kia as an option when considering your next motor vehicle purchase. The 2019 Kia Sorento GT-Line SUV is quite simply an outstanding choice for a 7-seat family car.

So, now that we’ve said it 1,001 times, we won’t say it ever again. If you don’t at least look at Kia’s premium large SUV variant, then you’re a bum, or a bloody idiot, or any other famous catch phrase from an ex-politician that you can conjure up from the past.

Powered by a 206kW 3.5-litre V6 petrol engine, producing 336Nm of torque, butted up to an 8-speed automatic, the Kia Sorento GT-Line is lots of fun to drive, but we do need to warn you, it’s not a 4WD. The petrol variant is front wheel drive only.

That said, aside from a little wheel spin here and there when you take off too quickly, the Sorento GT-Line is very well behaved on the road, with a great ride and dynamic handling that never felt like it was going to do the wrong thing.

There’s also a tonne of room, everywhere, but it’s very impressive in the second row, and the seats are easy to fold down to access row number three in the spacious 7-seater, with that third row more than accommodating, even for adults.

We stuck a 168cm tall 16-year-old back there for a drive around the countryside and he was not only comfortable, not once did he complain about lack of room. That’s got to be an achievement in itself, right. Well at least we think so.

The unreal level of stuff back there probably helped our cause, there’s cup holders, and a power outlet, climate control, speakers, you name it, it’s all within reach, and there’s even side curtain air bags in the first and second rows, for added safety.

It’s got a 2,000kg towing capacity (braked) and the expected 750kg unbraked while boot space with just the third row laid flat is 605-litres. Lay the second row down (which can be done at the push of a button), and you’ll have a whopping 1,662-litres to play with.

Downsides, sure, there’s a couple, but none of them are major. Other than being front wheel drive, it feels bulky from the inside; like you’re driving a LandCruiser 200 Series, even though it’s not even close to that. It’s an odd shape perception.

It also needs more torque. It’s got 336Nm but with a tare weight of 1,875kg, it feels like it is working hard to haul that around under heavy acceleration. Finally, some punters may balk at the price. It hits the road at $61,096 drive-away.

There are currently some 10 model variants in the range, or eight if you don’t count the two AO (Australian Open) special editions. In essence, that’s a petrol or diesel option in each of the four available trim levels, the AO editions being a special option.

Like all Kia products, the 2019 Kia Sorento GT-Line comes with a 7-year unlimited kilometre warranty, and has a 5-star ANCAP safety rating.

The test vehicle used in this story was provided by Kia Australia. To find out more about the 2019 Kia Sorento GT-Line, contact your local Kia dealer.