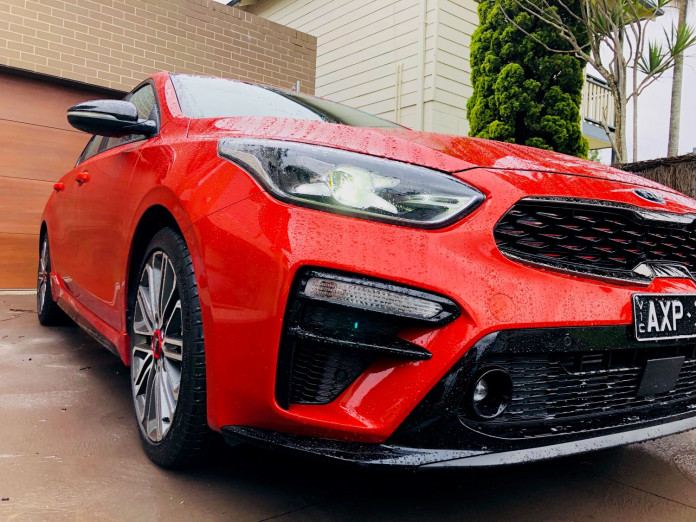 SITTING in a secret board room somewhere between the offices at Kia Australia and Korea, a team of engineers and designers were gathered, planning a secret weapon. That secret weapon is the 2019 Kia Cerato GT.

An idea born over a few drinks and a whiteboard session (well maybe not), is a reality; a turbo-boosted performance Cerato. It looks and sounds wicked, and we reckon it will make the local market sit up and take notice.

Powered by the same 1.6-litre turbo petrol engine as the Hyundai i30 N-Line, which ironically first appeared in the Kia Koup, the Cerato GT produces 150kW of power and 265Nm of torque, and feels very much like the all-conquering Stinger’s kid brother.

Matched to a 7 speed DCT auto gearbox, the Cerato GT has an agitated (in a toey, let’s go kind of way) heartbeat. It’s also bundled with driving modes that include Eco, Comfort, Smart and Sport, giving multiple choices for the launch of this rocket.

Sport is where it’s at though, and the entire Exhaust Notes Australia team found itself choosing Sport or Smart over Comfort and Eco on pretty much every single occasion. It gets better though. There’s paddle shifters as well.

Acceleration from a standing start is excellent. It is not as good as say the hot hatches in this category, and not just because it’s a sedan, but it also doesn’t come with the much higher price tag.

And the exhaust still gurgles as you flick down gears entering corners. The Cerato GT also has a pleasing note as you increase speed and drive through the gear range. The ride is firm and there is minimal body roll.

The suspension is handled through McPherson strut front suspension and multi-link suspension at the rear, and although every day city driving is still comfortable, you will notice the ride is overly solid.

We have to say though, we’d pin the Kia as among the best in its class, for a warm performance sedan or hatch that sits outside the true hot hatch domain. Road noise is pretty minimal too.

It’s also shod with performance shoes, with the 18-inch alloys wrapped in 225/40z Michelin Pilots, which offer remarkable grip and feedback, and keep the Cerato well and truly stuck to the road.

Our 2019 Kia Cerato GT test vehicle was supplied in Sunset Orange, a color that is exclusive to the Cerato GT, but you could also choose Aurora Black, Steel Grey, Snow White Pearl, Runaway Red and Platinum Graphite.

Sunset Orange was one of those colours though, that looks better the longer you admire it, and with the Cerato GT’s subtle gloss black body kit, the styling is not outrageous, but rather smart and sophisticated.

Inside the cockpit, the black leather seats are adorned with a red GT logo and red piping to increase the sports demeanor, while the front seats add both heating and ventilation, which is a nice touch.

The driver’s seat is 8-way adjustable, with 2-way lumbar support and offers a great driving position, as well as support for relaxed driving, even when you’re launching the Kia down twisty winding roads. There’s plenty of room in the back for two adults as well.

In another nice touch, Kia has thrown a premium 8-speaker JBL sound system into the Cerato GT, along with an easy to use infotainment system that offers support for Apple CarPlay and Android Auto, SatNav and full Bluetooth connectivity.

The reversing camera is very clear too, and pretty much everything can be controlled from either the 8-inch display or the steering wheel. Wireless phone charging is also on board if you have a compatible smart phone.

Now if all that hasn’t sparked your interest, you not only have something wrong with you, but the next bit is sure to raise your eyebrows. The drive away price for the 2019 Kia Cerato GT starts from $31,990. Premium paint is an additional $520.

Kia’s now famous 7-year unlimited kilometre warranty is standard, as is a gigantic 502-litre boot in the sedan. We reckon this could well be a car with a cult following future if the modders start to play with them.

Our test car was provided by Kia Australia. To find out more about the 2019 Kia Cerato GT, contact your local Kia dealer.