THERE are but a handful of cars that can trace their appearance back decades to the immediate post WWII era. By our reckoning that list includes the recently canned Volkswagen Beetle, the Porsche 911, and the Jeep Wrangler.

With the demise of the Beetle, there are now just two. Sure both have evolved from their original models, but the same basic shape remains from when designers first penciled their looks on a drawing board in Germany or the USA.

In the case of the Jeep Wrangler, it can trace its roots back to the early part of WWII when the US military called for a go anywhere, lightweight vehicle to get soldiers into and out of difficult battle conditions.

It was the staple of the US army’s basic transport needs for many decades, until the Humvee came along. That history is still there when you slip behind the wheel of the latest Wrangler.

You can feel the compromises that come with a package that has its origins in the 1940s. Sure things have moved on in terms of creature comfort, performance and safety, but that unmistakable Jeep styling and rugged off road appearance remains.

It’s a hit with lots of buyers looking for a lifestyle machine that looks like it can take them anywhere, even though most of the time the speed bumps in the shopping centre car park are as severe an off road challenge they’re likely to meet.

With a price tag of $58,450 plus on-roads, this Wrangler is a long way from those basic machines that GIs piloted across the theatres of war over so many years too.

These days it has a very well equipped and quite luxurious interior, despite the limitations of the overall design and package size, but more of that later. 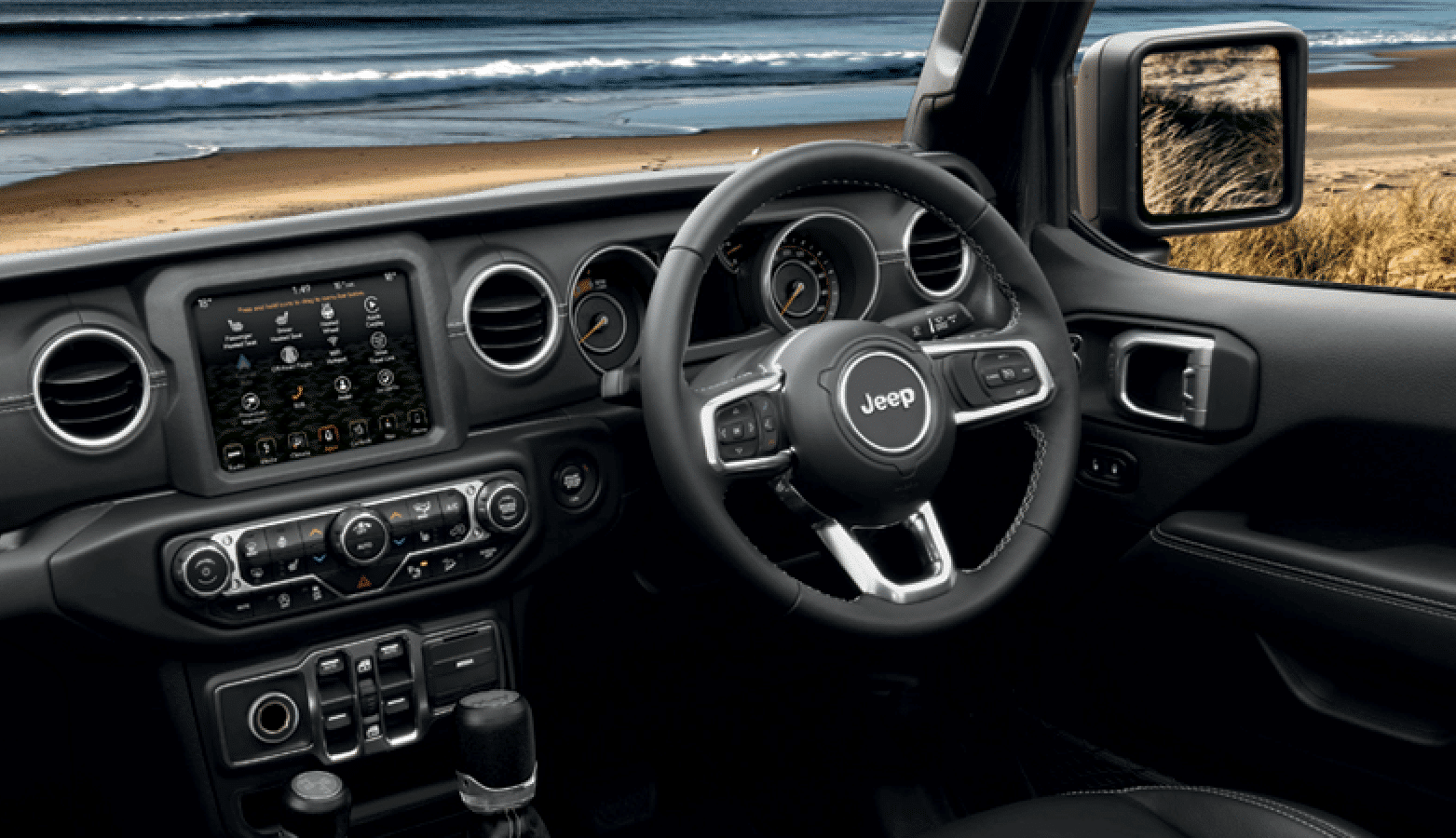 The Overland is the more expensive version of the 2-door Wrangler, and is also available as a cheaper soft-top option. It does come with removable FRP roof panels though, and while adding to its top down appeal, these are somewhat cumbersome.

They can be stowed in a provided bag, however it is a little time consuming and the panels take up quite a bit of valuable real estate in the Wrangler’s cramped interior.

Inside, the dash is a flat panel filled with gauges and switches, along with some padding and leather trim. The centre of the flat dash is dominated by a big 8.4-inch LCD touch screen display that has been drawn directly from Fiat Chrysler central casting.

It operates with the Group’s latest UConnect system, which works well and is quite intuitive and easy to read, as well as interfacing with both Android Auto and Apple CarPlay.

Heating, venting and air con controls are below the LCD display and are generally easy to use, while below that is a panel with buttons for the power windows, a 12-volt power outlet/cigarette lighter, and a port for USB and media connections.

The centre console is dominated by the gear selector and the transfer case lever. Oh yes dear reader, this is an old school off-roader with the ability to select 2WD, or high or low ratio 4WD. No electronic selection or selector dial here.

The two bucket seats up front are covered in leather, are comfortable and well shaped, and offer terrific support. They’re also heated to keep the derriere warm on cold winter days, and if the pinkies are a bit cold the leather steering wheel is also heated as well.

But the Wrangler’s cramped interior is one area that stood out for us, particularly the crowded nature of the driver’s wheel well, which has clearly suffered in the conversion from its original left hand drive to right hand drive for down under. 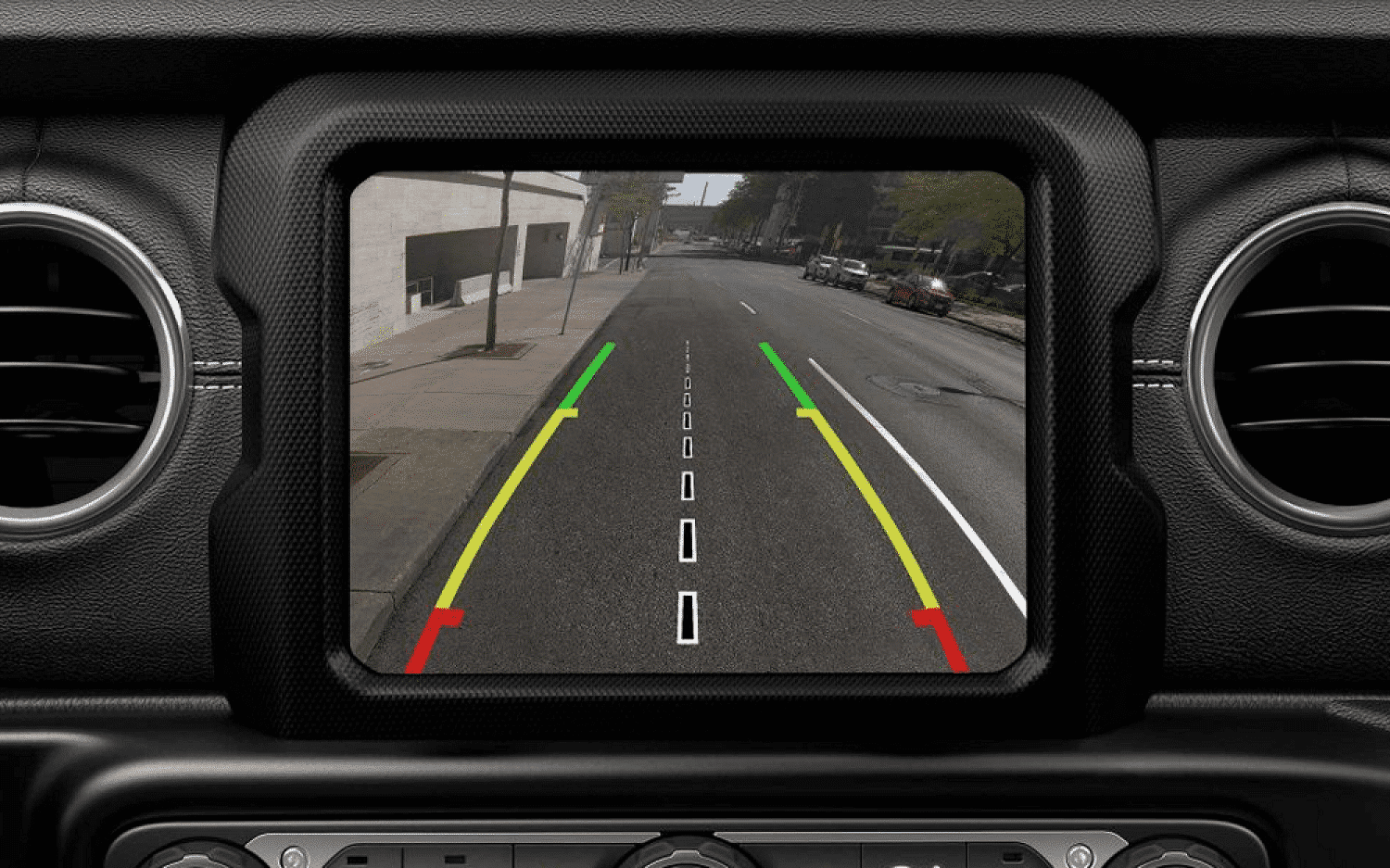 This is demonstrated by the size of the passenger foot well, which has much more room. Speaking of cramped, and we were, don’t event try to sit in the back seat if you are over 155cm; room is at a premium and it is more a convenience than a really usable space.

The rear seats can be folded down for extra luggage space, which is something else that’s limited. Like we said the Jeep Wrangler is a compromise.

Tailgate operation is also compromised, with the glass upper part dependent on the swing out tailgate, with its accompanying spare tyre bolted aboard, before it can be opened. It makes it difficult to just lift the window to drop some gear in or get something out.

On the road, the Jeep Wrangler is powered by the FCA 3.6-litre Pentastar petrol V6, producing 209kW and 347Nm. Its an engine that spins freely and willingly and has no shortage of urge, in fact to our way of thinking probably too much in some occasions.

The urge off the line lifts the nose and comes on with a rush at times. It is almost a bit over eager and uneven, even with quite light throttle inputs. Its smooth but a little unnerving in the rush that it delivers and it would be nice to have it arrive more evenly.

The power plant is attached to the eight speed ZF auto unit that is the industry standard these days. It is a superb gearbox with smooth almost imperceptible shifts and a clever logic control that mostly sees the car always in the right ratio.

We found the steering to be a little too vague at cruising speeds too, and a little slow for parking and maneuvering. It has clearly been geared for off-roading, where it works well, but perhaps a small compromise might have been engineered in.

Lets face it, the Wrangler will spend most of its time in urban climes, but would still be capable off road if the steering was given a more on road performance characteristic. 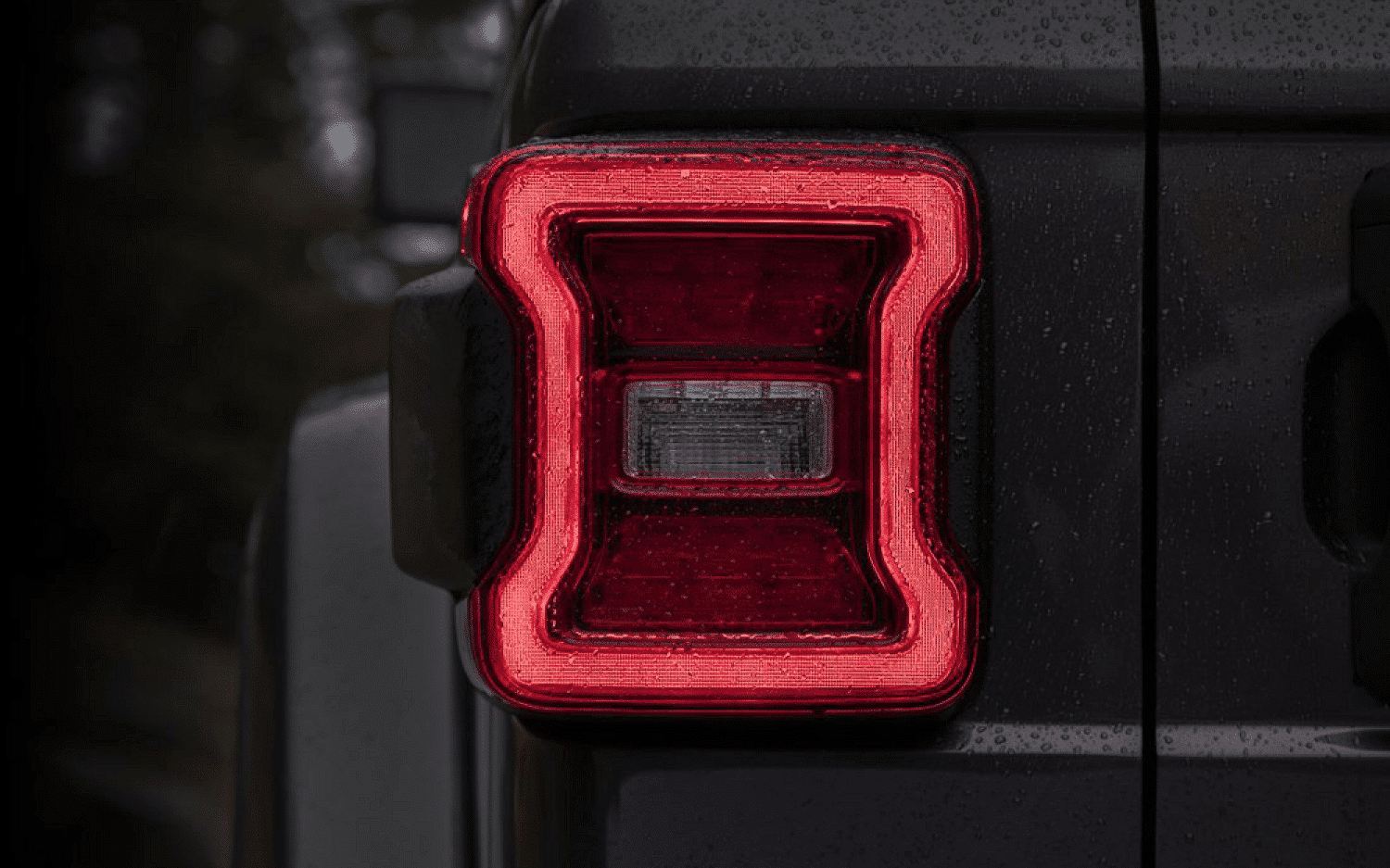 Under those big guards and flares are some substantial 255/70R18 Bridgestone Duelers mounted on quite attractive alloy rims, which work well with good on road grip and road holding, while working OK in everyday off road work – yes you got it, a compromise.

When it comes to ride and handling the soft nature of the springs always made us feel the Wrangler was teetering on the edge and wallowed just a bit too much for our liking. Given its short wheelbase, it feels inherently unstable at the best of times.

The softness also makes the nose lift under acceleration and dive under braking, which only adds to the unstable feel and nervousness at the limit.

We understand why it is like this, again for off road climbing and grip, but Chrysler Jeep engineers could have tightened it up a little to make feel a bit more stable.

It comes with electronic stability control and autonomous emergency braking, as well as active cruise control and driver and front passenger airbags. But the old nature of the chassis means the Wrangler labours under a one star safety rating.

As we keep saying, the Wrangler is a compromise, and it’s a car that will appeal to a particular buyer purchasing more with the heart than the head. It is fun but would be a difficult to live with day to day.

Our test vehicle was provided by Fiat Chrysler Australia. To find out more about the 2019 Jeep Wrangler Overland, contact your local Jeep dealer.