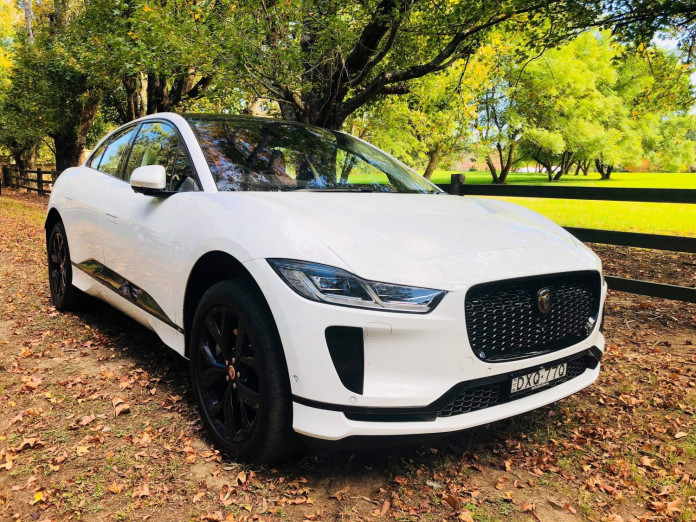 DOWN on Electric Avenue there is a new cat in town. A big cat with beautiful, sophisticated SUV lines and a hint of sports car, wearing ridiculously gorgeous shoes. Stealthy and silent; it is the 2019 Jaguar I-PACE SE EV400.

It comes from a motor company with a rich history when it comes to building some of the classiest cars of all time, including the E-Type, in what is its first foray, boots and all, into the future of electric vehicles.

In fact, the Jaguar I-PACE comes complete with its own race series, the eTrophy, which runs as a support category to the Formula E World Championship. But back to the shiny silent running road version.

If we’re going to talk about it, we’ll have to start with the attention grabbing 20-inch alloy wheels though, because aside from the unique shape of this Jag, they make the biggest statement about their hope of being the next king of the EV jungle.

And it may be built on and SUV platform, but the I-PACE has a real sports car feel, and there are a myriad of nods to the F-TYPE all over the place, but no more evident than in its unique body styling and curved lines.

Start the I-PACE via the push button start, and the first indication you have that the car is on is that the dash has lit up. Yours truly is an EV virgin so that took some getting used to, as did the insane acceleration and regenerative braking.

For mine, greater accelerator control is required to pilot the big Jag, but the the more you drive it, the more you become accustomed to the drive characteristics of the I-PACE.

One of the big pluses of the I-PACE, and all electric vehicles really, is that petrol stations have become a thing of the past, and there’s no more worrying about bowser pricing or long queues to fuel up. At least for now.

However, charging stations are now your new best friend, and while most are free for now, there are plans to charge for that service at some locations. Major motoring groups are off-setting this though, making charging free for members.

We tested the charging process on one of the NRMA’s electric fast charge stations, presently under trial in NSW. To get from 48 per cent charge to fully charged took one hour and 19 minutes.

That said, we were at 80 per cent in just 35 minutes. Jaguar’s wall charger takes about three hours to get to fully charged from near flat, and a standard 240v power point will take a lazy 25 hours to restore 50 per cent charge.

What we’re saying here is that if you’re taking a long journey, you’ll need to plan a little, while we wait for Australia to catch up with the EV revolution sweeping the world.

Range is fairly limited on the I-PACE, and varies depending on how hard you drive it, and which drive mode you play in. As you would expect, there is an eco-mode to minimise battery use and increase regenerative charging.

While Jaguar claims you could get up to 400km out of the I-PACE on a single charge, we were struggling to hold onto 340km in range, in normal driving conditions. Use R-Dynamic mode (aka angry mode), and you can trash that number.

Angry mode does a few things, including deliver all the ponies from the Jag’s state-of-the-art electric power system. It also drops in a somewhat naff acceleration noise, just so you know you’re in go fast mode, and switches all the dials and interior lighting red.

In this mode, you can whip to 100km/h from a standing start in 4.8 seconds, thanks to the 294kW power plant. The I-PACE has a top speed of 200km/h and delivers phenomenal acceleration.

Inside, Jaguar’s new electric vehicle offers a cabin filled with nice bits and a real luxury feel. It’s super comfortable, with the interior not too dissimilar to that of sister brand Range Rover and its Velar offering.

The split screen infotainment system not only features an excellent sound system, and satellite navigation, but also houses the majority of controls for the car. Everything from comfort settings to driving modes is available at the touch of a button.

From here you can also control what we think is one of the coolest things about this car; the multiple ambient lighting colours. These include purple, aqua, blue, red and yellow, in various shades.

It’s inside that we also experienced what we’d describe as a bit of a moment, bought on by a sudden drop in outside temperatures, and the climate control system’s ability to cope with that.

We had the inside temperature set at 22.5 degrees, while outside, the mercury plummeted from 13 degrees to 9.5 degrees in the space of a few hundred metres on a country road. The windows fogged instantly, at 90km/h (the speed limit).

With only the double white centre line separating us from oncoming traffic, there was a moment of panic, before we jumped off the accelerator and the climate control system had time to catch up. We’ll thank the overly sensitive lane keep assist here too.

Overall though, the 2019 Jaguar I-PACE SE is a great car. It was 2018 European Car of the Year for a reason.  Targeted at rival Tesla and its Model X offering, the I-PACE delivers something the US EV giant has struggled with; exceptional build quality.

Pricing starts at $130,200 plus on-roads for the SE variant, and there’s a myriad of optional add-ons to make your I-PACE your own. But if we had to sum up the 2019 Jaguar I-PACE SE in one word, it would be I-LECTRIC.

Our 2019 Jaguar I-PACE SE was provided by Jaguar Australia. To find out more, contact your local Jaguar dealer.