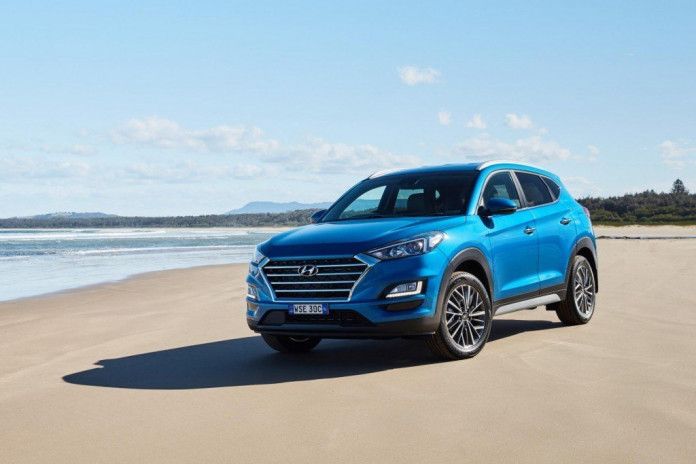 IT’S the mid-sized SUV that keeps on giving for Hyundai, with solid sales since it’s introduction three years ago. Now the 2019 Hyundai Tucson Elite has had an overhaul, with changes inside and out, along with extra tech and new drive trains.

The Elite enters the 2019 model year as the second model from the top in a four model range, following the introduction of the new budget variant, the Go, and has a raft of new bits, starting with the now standard cascading grille.

It’s less aggressive than the new Kona or the new Santa Fe but it does bare many similarities to both of those, particularly on the inside. Staying outside for now though, the headlights have also had some internal work done to improve lighting positioning.

At the rear, new i30 style reflectors are also present and have been placed further up the tailgate, while the design of the rear taillights has also been massaged to improve look and visibility.

The Elite is the second model from the top, one step down from the Highlander, and features a leather interior, in our case in a beige colour that we’re sure is called something exciting, even if it feels very subdued.

Driving position is upright and the Tucson has a real ‘comfy’ feel to it as you steer your away through traffic or out no the open road. Rear head and leg room is fantastic too. The infotainment system is solid, and easy to use, and the SatNav works a treat.

We did notice that it decided to show night maps in the middle of the day, despite the clock being set correctly, but we won’t begrudge the system that. It took less than five seconds to hook the phone up, and it supports Apple CarPlay and Android Auto.

You will need to plug-in to the USB port in the console for that though, and you’ll need that connected device to make voice activated commands work too, which for us seems a little stupid.

There’s no proper charging port in easy reach, we had to hunt for one. There is a 12-volt power outlet though, and plenty of storage points in the centre console. Cup holders are on hand in the front and rear, and there’s tight fitting water bottle holders too.

The pop-up style HD infotainment panel is new to the Tucson, having been relocated from the centre of the dash to rise above newly positioned vents, and while not everyone will like that, the upside is it’s easier to concentrate on the road.

We should say if you’re keen on the finery of things like wireless phone charging, a giant panoramic sunroof and a powered tailgate, you will need to step up from the Elite tested here, to the range-topping Highlander.

Something else we think is missing from the Tucson is Smart mode. In the 2019 Hyundai Santa Fe Active (yes that’s a level down from this), there are four drive modes, Eco, Comfort, Sport and Smart. Here, the last of these is missing.

The full digital dash features such handy information as accumulated litres/100km and a compass. There’s no HUD, but let’s face it, for the price, it’s a great package, with one other exception.

Road noise. It’s bad, and we mean really bad. It’s terrible on anything other than an ultra smooth road surface and even made it virtually impossible to have a phone conversation with someone on a road like the concrete surfaced M1 in NSW.

Our 2019 Hyundai Tucson Elite was powered by the 122kW 2.0-litre petrol GDi engine, which pushes 205Nm of torque to the front wheels. A 130kW 1.6-litre turbo petrol AWD version is also available on the Tucson range, along with a diesel option.

It’s a pretty smooth drive, and ride and handling is, in a word, excellent; a marked improvement over the previous incarnation of this car. The petrol engine and 6-speed auto gearbox combo is smooth in its transitions on the plus side.

On the minus side, it feels a little thrashy and overworked. For the record, the 1.6-litre turbo variant we talked about, it gets a 7-speed DCT. It hits the road at $42,727 drive away and comes with a 5-year unlimited kilometre factory warranty.

And because we know you were wondering, that beige interior colour is called Beige. It also comes in Black leather. On the outside, you can choose from Phantom Black, Aqua Blue (our test car), Sage Brown, Platinum Silver, Pepper Grey and Pure White.