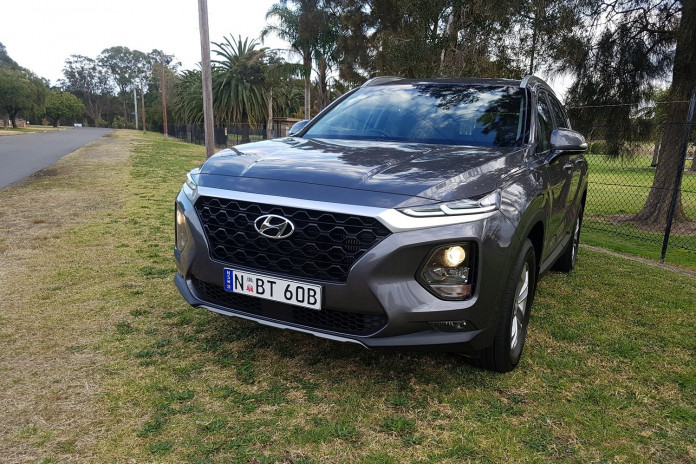 TAKE everything you know about the Santa Fe and chuck it out the window. Okay, it’s not really that big a change, but the 2019 Hyundai Santa Fe Active is definitely a whole new experience.

Any lingering doubt you had over the quality of this Korean built SUV should now leave the building as well, because having taken a major leap forward in technology, a boost in size and a massive jump in styling, the new look Santa Fe is a much improved offering.

Oddly, there’s a petrol version of the Santa Fe Active (and only the Active), that pushes out 138kW of power and 241Nm of torque from its 2.4-litre 4-cylinder engine. This is not it, and we’re not really sure why it exists. To each their own, if you must have petrol.

The better choice though is the super economical 2.2-litre 4-cylinder diesel that generates 147kW of power and 440Nm of torque, which is coupled with an 8-speed automatic transmission, with a claimed 7.5-litres/100km combined fuel economy.

We managed a 7.9-litres/100km figure in a good mix of highway and suburban driving; an outstanding figure a big 7-seat SUV. Those figures are impressive, really impressive when you consider the Santa Fe weighs in with a kerb weight of 1,870kg at its lightest.

It’s got a 2,000kg braked towing capacity, as well as the pretty much standard 750kg for un-braked towing. It does however only have a 100kg ball weight rating, unless you add the factory towing assist kit, which brings that to 150kg.

But it’s the simple conveniences that most impress with the new Santa Fe Active, and one of those is a USB charging port, smack bang in the middle of the centre console, next to the Apple CarPlay/Android Auto port. There are ticket holders on the sun visors too.

And that right there is what makes the new version of Hyundai’s family SUV all the better, they’ve thought of lots of little things that frustrate people and have either fixed them from the previous model, or added them into this model.

Plenty of those are technology or safety based, and the base model Active is loaded with it, including the entire Hyundai SmartSense safety suite, which is standard across the entire Santa Fe range.

It includes blind spot collision avoidance, driver attention warning (which can be annoying if it doesn’t think you have your hands on the wheel, even when you do), forward collision avoidance for cars, pedestrians and cyclists, and high beam assist.

And before you go wow, that’s a lot of safety, let’s not forget emergency stop signalling, reverse parking sensors, a rear view camera with dynamic guidelines, a host of airbags, roll over sensors, and impact-sensing auto door unlock functionality.

If there is a downside to the stylish interior, it’s the cloth seats in the Active, because well, they’re a bit yuck. They kind of feel like nightclub seats, the type you could hose down if you messed them up after a heavy night on the cans.

But that aside, the interior is spacious and roomy, and looks classier than it ever has. It’s a 7-seater with good third row seating and although it has single zone climate control, there are vents in all three aisles.

There are five cup holders in all, two in the front, two in the centre arm rest of row two, and one in the third row, with an additional storage space back there as well, along with door pockets for drink bottles and whatever else you need to shove in a door.

It has a 7-inch touchscreen infotainment system and the software behind it has been vastly improved, but there’s no SatNav. It has a 6-speaker sound system that sounds good but isn’t mind blowing, and there’s no digital audio in the base model either.

Among the additional cool touches are row two USB charging ports, there’s a pair of those, and a walk in switch, designed to slide the second row forward to make accessing the third row seating much easier. There’s a power outlet in the boot too.

We get the feeling someone with a very random sense of humour named Hyundai’s new colour range, with some unique monikers for different colours, which also includes Rain Forest (our blue hued test car), Horizon Red and Stormy Sea.

Our 2019 Hyundai Santa Fe Active was provided by Hyundai Australia. To find out more, contact your local Hyundai dealer.