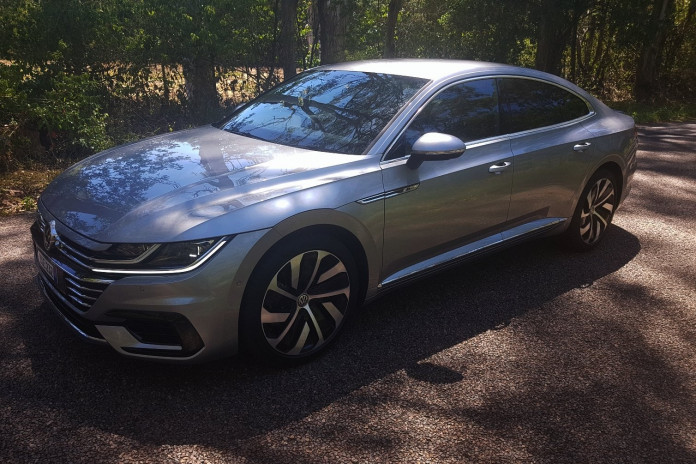 CAN a volume car maker like Volkswagen build a big coupe to rival the major players in a tough market sector, who build based on much smaller volumes and much higher pricing? In short, yes they can.

VW is known for its ability to take a blow torch to niche markets and the 2018 Volkswagen Arteon 206TSI R-Line is just another example of that, with its big, roomy, Passat based coupe offering style and spice to a family friendly recipe.

It’s busy and interesting compared to Volkswagen’s more typically restrained norm. A deliberate move, considering the Arteon is going to have to stand out among those established, and desirable competitors it’s up against.

The Arteon’s big front grille helps with that, and its big dimensions help give it not only presence, but space too. It’s design will turn heads, it’s extravagant, and sculpted. It’s got a wide stance, a fastback tail, and classic GT proportions.

And that’s before you add the optional 20-inch charcoal turbine-shaped alloy wheels. It looks as glamorous as the Passat sedan it shares much with, looks staid. And that’s also part of its issues.

Up against the likes of the Audi A5 Sportsback, the Arteon shares too much with the Passat, and feels lacking, and free from wow, on the inside. Don’t get us wrong, the cabin is well built, and the materials are soft to the touch.

It even comes with a digital instrument screen like in an Audi TT, but the wow is just not there when you climb inside.

The 9.2 inch centre screen (with great swiping, and naff gesture control) complemented by the digital Active Info Display instruments, are top class, but not surprising to behold.

Ditto the familiar touches like the metal highlights, the way the air vent crossbars continue horizontally along the dash, the analogue clock, and the flocked door pockets.

But don’t make the mistake of assuming this is just a Passat in disguise either. There’s a pop up glass head up display, and adjustable ambient LEDs in the cabin, though only three colours are available.

Then there are the classic frame-less doors, gorgeous heated (front and rear) leather seats, and electric lumbar support for the driver, to help you travel huge distances without backache.

Things are spacious in the back too, passengers get loads more knee room, though you still won’t want to carry three back there for long trips. You’ll easily fit three people’s luggage in the big boot though, it’s huge.

The Arteon is powered by the Golf R 2.0-litre four cylinder turbocharged petrol engine, and thanks to the R tuning, it boasts a healthy 206kW of power and 350Nm of torque, which is more than competitive against its luxury car rivals.

It’s not a sports sedan, but it has plenty of punch, both off the mark and on the move, with strong pulling power thanks to all that torque. The 0-100km/h sprint can be managed in 5.6-seconds, according to VW’s claim.

It’s pretty good on fuel as well, and we managed a respectable 9.0-litres/100km, which is not bad and pretty close to Volkswagen’s claimed 7.5-litres/100km.

The engine is paired to a seven speed dual clutch transmission which has the same pros and cons as all of its kind. On the move it’s great, offering lightning fast shifts and thanks to its broad spread of ratios, excellent performance.

However, at low speeds there is still the occasional stutter and clunk as it tries to find the right gear. That aside though, the Arteon is loaded with high end technology to keep you safe.

There’s a system that will automatically pull over and stop the car if it detects you’ve fallen unconscious at the wheel, and all models come with adaptive cruise control, and emergency lane change assist.

If you’ve not heard of ELCA, it activates when you are using both active cruise control and lane keep assist, by first providing prompts to take control of the wheel when the car begins to drift significantly.

If you don’t respond, the on-board computer decides you may be asleep, or worse. So the car tries to wake you with an intermittent gong, puts the hazard lights on, commences brake and steering jolts, and theoretically keeps you in your lane while mirroring the car on front’s road speed.

From a luxury car perspective, the Arteon is Volkswagen’s most convincing offering to date, and has pushed the boundaries in styling and equipment to ensure this car looks and feels less like a Passat in a pretty dress, and more like its own unique model.

Only one variant is available, priced at $65,490 before on road costs. Despite a few issues here and there with this car, it’s super impressive and had at least one member of the Exhaust Notes Australia team contemplating buying one.

Our 2018 Volkswagen Arteon 206TSI R-Line was provided by Volkswagen Australia. To find out more, contact your local Volkswagen dealer.