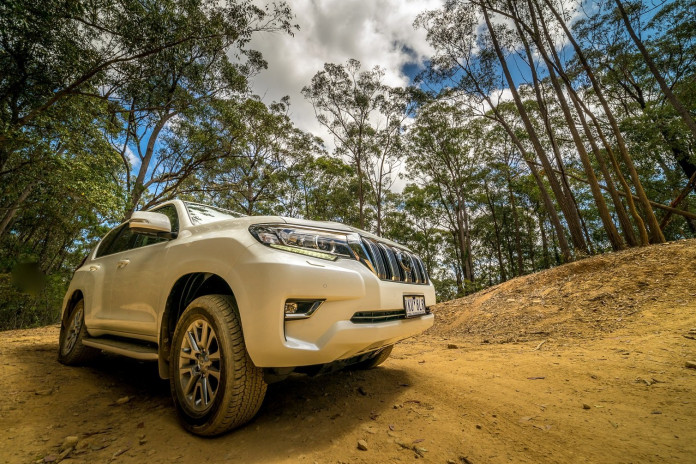 THE Toyota Landcruiser Prado story began in Australia with the 90 series first hitting our shores in 1996. It was instantly popular with Aussie families and those that didn’t want the sheer size of it’s father. The ever so popular Landcruiser.

Since then it’s gone through a few version upgrades and a bunch of changes, but the latest version of the Prado represents the biggest cosmetic makeover since 2013, and marks the biggest engine change since inception.

Despite an all new engine and transmission combo arriving in 2015 to address Euro 5 emissions requirements, Toyota has taken the biggest evolutionary engine decision ever, and dumped the petrol power plant from the range.

The decision to lose the petrol engine was an easy one when you consider that for every 100 tough, reliable, go anywhere Swiss Army knife on wheels Prado they sold, 98 of them were diesel.

So it’s safe to assume now that we have been driving around in the top-of-the-line diesel version of Australia’s best selling large SUV, a vehicle that held a dominating 13.8 per cent market share in 2017.

The new Prado finally receives a segment competitive 3,000kg towing capacity along with price cuts and equipment upgrades across the board, with the long overdue changes putting the Kakadu variant on the road at $84,490 plus on-roads.

Our luxurious Crystal White Pearl off-roader is fitted with a lot more kit than the previous Kakadu and the 2018 edition receives a host of new active safety technology, including autonomous emergency braking with pedestrian detection.

As well as all that, there’s a rear diff lock and upgraded instrument panel, including a colour multi function display, leather upholstery with heated and ventilated power adjustable front seats, and bum warmers for the second row.

We’re not finished yet either, because it also comes with electric steering column adjustment, blind spot monitoring and rear cross-traffic alerts, and a refrigerated compartment between the front seats.

Still not done. There’s a 14-speaker JBL premium audio system with DAB+ digital radio reception, and a 360 degree cameras with a choice of views from the front, rear and two side cameras that can help position the vehicle while off road or parking in tight spaces.

Right. Breath. Now to what’s under the bonnet. Here you’ll find the same 2.8-litre four cylinder from the popular Hilux, producing 130kW of power and a healthy 450Nm of torque; married to a six speed automatic transmission.

The Prado comes with an 87-litre main fuel tank and a 63-litre sub-tank, so you should see around 1,200 odd kilometres out of a single fuel load, if you maintain what we managed; around 9.2L/100kms.

It needs all that pulling power though, because it’s a small engine to move an SUV weighing 2,455kg. Perfect in the Hilux, but not so in the Prado. Unfortunately it seems like it’s all about the looks and equipment levels in this face lift.

Except for one significant difference. That difference is the 3,000kg braked towing capacity, the result of the front end redesign, necessitating a revision to the transmission cooler, giving an extra 500kg, pretty much by accident.

The engine is still louder than it should be for a vehicle of this price and it still feels under powered, so it’s not perfect. From the drivers seat you can really hear the engine compressing the fuel into power, and it really sounds like an old tractor.

On the outside of the car, the noise, especially under acceleration, is disturbingly bad. If Toyota are smart, they’ll invest significantly in sound deadening for the next upgrade, or redesign the diesel engine to be much quieter for the next Prado.

What we didn’t expect but discovered during our extensive testing of the Prado was that it would accelerate off the line okay, but would run out of puff and struggle up steep long hills. We also didn’t expect to have to plan overtaking.

The six speed automatic does its job without any fuss, working away smoothly in the background. The transmission calibration also likes to lug the engine in a way that feels distinctly uncomfortable way for anyone who can drive a manual properly.

Flicking the shifter to Sport mode goes too far the other way, leading to a gravelly, high revving soundtrack from the engine. The only real solution is to row the auto’s manual gate, but surely this misses the point?

Like the Prado’s dynamics, the engine makes more sense in an off road setting, and with peak torque from just 1600rpm to 2400rpm, it can walk its way across obstacles at low speed, and offer a quick jab of extra power when required.

New to the Kakadu are five selectable drive modes which allow the driver to switch between Eco, Comfort, Normal, Sport and Sport+. It’s a strange mix of drive modes, given Comfort and Normal feel virtually identical.

Toyota quietly dropped the KDSS from the VX in the new face lift, and it is now only available in the Kakadu variant. The KDSS can slacken the sway bars for additional off road axle articulation and tighten them for flatter on road cornering.

Thanks to its suspension system, the Prado Kakadu is a comfortable cruiser around the city and the drive modes alter suspension damping and throttle sensitivity. On the down side though, Toyota has stuck with a hydraulic steering system.

Despite missing out on electrically assisted steering, the Prado’s steering is light enough for city driving and communicative enough when punted through corners, and of course when driven off road, where it has plenty going for it.

Given how dry the terrain was, most of our driving could be tackled with the centre differential locked, but we tried out the multi terrain select system (MTS) and crawl control on a steep descent.

For the rocky mogul section we drove across, we slid the MTS into rock mode. This mode reduces throttle sensitivity, which prevents the car surging forward and potentially crashing over rocks.

There are five MTS modes to choose from (mud and sand, loose rock, mogul, rock and dirt, and rock) and they’re selected by switching the dashboard mounted knob between the settings.

Crawl control on the other hand uses the vehicle’s traction control system to limit descent or ascent speed with five speed presets. It worked well through a steep loose rock descent, but the noise the system made was incredible.

Testing chassis integrity with a four wheel drive is a test we love to do, so we lined the Prado up on a set of uneven mounds causing full compression on the front right and rear left wheel. Basically what four wheel drive enthusiasts call a “flex test”.

This produces a torque movement about the chassis, which in some less rigid vehicles causes the doors to either not open or not close correctly. The Prado passed with flying colours, with the door catches opening and closing with no obstruction.

With the off road testing complete, we jumped back inside the Prado to give the interior a thorough once over, with the Kakadu getting an updated dash and classier instrument panel as part of its new look.

There’s a new central instrument stack that, like the redesigned front end, is clearly intended to provide a family resemblance with the larger 200 Series Landcruiser, resulting in a much more resolved, better integrated, look than before.

Shorter drivers will also appreciate the new, lower central air conditioning vents that help provide a better view than the unfathomably tall unit that went before, helped by the new and deeply scalloped bonnet beyond.

Unfortunately the angle of the new 8.0-inch touchscreen results in sun glare regularly obscuring it from view; a usability fail, and despite the overall cleaner appearance, it’s unresponsive, and lacks Apple CarPlay and Android Auto.

There are plenty of switch blanks too for those who like to modify their Prado, and add buttons for things like trailer brake controllers, spotlights, and air compressors; and the ‘2nd Start’ button is back.

There’s a fair bit of thin plastic across the dash though and it cheapens the expensive look Toyota seems to want to achieve with the Kakadu.

The Prado remains one of too few vehicles in the Toyota range to include a digital speed display and when the adaptive cruise control is being used, the speed readout is obscured by the vehicle detection icon.

This would be okay if the cruise control could maintain a steady speed down hills, but it doesn’t, and can gather enough momentum for some flagrant breaches of the speed limit if you are not paying attention.

The other downside of the driving experience from the inside, is in fact more of a parking experience. When parked on a steep cambered road or on the side of a cricket field watching the kids play cricket, the side swinging tailgate is an issue.

It’s super heavy and the strut designed to keep it open is pretty unconvincing in its ability to actually do that task. If someone parks close behind you, you can forget being able to swing it open as well.

Forget opening it properly with a trailer hooked onto the ‘off road’ tow bar either, as that’s going to get in the way as well. Inside the boot space, there’s also nowhere for the cargo blind to be stashed when not in use.

All those negatives aside, the Kakadu is in fact a spacious, flexible mode of family transport, with comfortable seating, a great driving position, and massive headroom, with an excellent combination of split fold rear seating, that lays flat.

Careful setting of the front and middle row seats in the 7-seater enabled a six footer to sit in the third row. Headroom back there is a bit compromised and the floor height results in a knees up seating position, but we did achieve it.

With a full load of people on board, everybody gets air con vents from a system that can turn the Prado cabin into a fridge, even with outside temperatures in the high 30’s.

Speaking of fridges, the one between the Prado’s front seats is so effective that it chills warm drinks in less than an hour. With the fridge turned off, it provides a huge storage compartment to go with the big glove box.

There are big drink cup holders and storage bins everywhere, and a 12v socket is located beneath the rear zone climate and seat heater controls, and a 220v mains style power outlet provided in the boot for charging larger items.

The 2018 Toyota Landcruiser Prado really is a no brainer. It’s a vehicle that does everything it says it will do on the box. It’s comfortable, easy to drive and will go anywhere off road.

Each of the colours is available with a choice of black or beige leather interior, with matching dashboard plastics.

Our test vehicle was provided by Toyota Australia. To find out more about the 2018 Toyota Prado Kakadu, contact your local Toyota dealer. Pictures courtesy of CMC Photography.