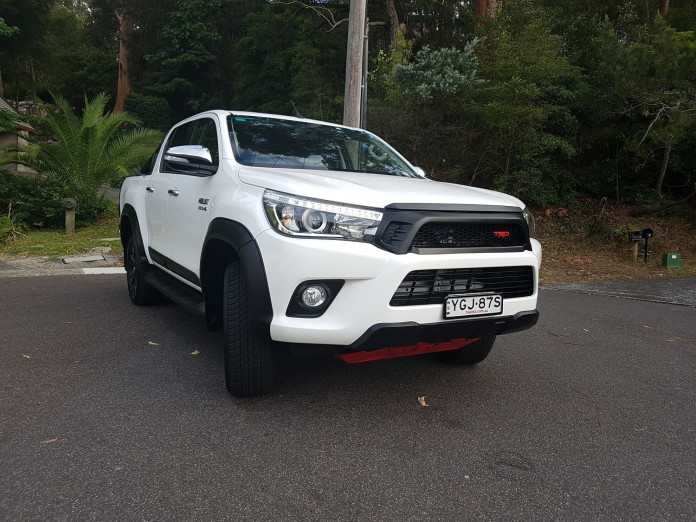 TRD. It stands for Toyota Racing Development; the in-house performance division of Toyota. With a reputation for stand out modifications and slick looking cars, they’ve been let loose on an SR5, creating the 2018 Toyota Hilux TRD.

The Hilux is renowned for its legendary toughness and packs serious cred around the work site. It sits in one of the toughest segments in the country and has bucket loads of family and tradie appeal.

The SR5 is the top of the tree in the Toyota Hilux range and it’s up against a long list of rivals that includes the Ford Ranger Wildtrack, V6 Amarok Highline. In the case of the TRD version of the pinnacle model, it comes in manual as standard.

Toyota’s performance arm has a history with the Hilux too, having built a supercharged version back in 2008, along with a similarly brutal version of the Aurion. Fast forward 10 years though, and there’s no mechanical performance upgrade this time round.

This latest offering focuses instead on beauty, with some 15 new components, most of which are cosmetic. On the outside, the Hilux TRD receives a luminous red front skid plate, special edition front grille, and wheel arches.

It also gets a lower bumper cover, mudflaps, black sports bar, black side and bonnet mouldings, and some sexy matte black alloys that ride on 265/60R18 highway tyres. Inside, the changes are minimal but obvious.

You’ll find special edition floor mats and a customised TRD gear knob (if you choose the auto variant), both of which really add to the look. The The interior is covered in leather and like most utes in this class the backseat space is limited.

The infotainment system is adequate and we really hope that during the model update that this is an area that receives some treatment. For example, audio controls are via the steering wheel as there is no volume dial on the head unit, which is a let down.

The ever reliable 2.8-litre D4D 4-cylinder turbo diesel motor is the heart of this Hilux. This motor is one of the backbones for the Toyota range and is prominent in Hilux and Prado models.

It’s truly one of the most reliable diesel motors in the market, which could explain, sadly, why TRD didn’t do any performance mods on it. Fuel economy is good too, and you can expect to get around 780km out of its 80-litre tank, or 10.3-litres/100km.

Put all the elements together and you get a class leading ute with a refined driving experience, and a beast look. The acceleration through its D4D power plant is good without being outstanding, but the ride and handling is best in class, especially loaded.

Absent though, like many utes, is blind spot monitoring and autonomous emergency braking. It does get capped price servicing though, and at the time of writing, a 3-year 100,000km warranty.

While it doesn’t quite have the performance of its main Ford Ranger rival, the 4×4 dual cab Hilux TRD’s reliability and resale value are second to none. The add-ons give it sporty styling that will look good, whether you’re cruising around or parked on the work site.

Our test vehicle was provided by Toyota Australia. To find out more about the 2018 Toyota Hilux TRD, contact your local Toyota dealer.