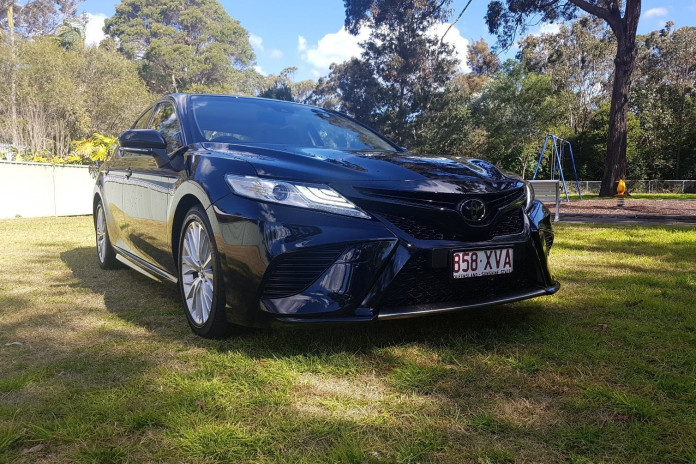 IF there is such a thing as a car that represented a wolf in sheep’s clothing, then the 2018 Toyota Camry SL V6 is it, only this time it’s a Lexus in Toyota clothing, or at least that’s what it feels like.

The Camry SL V6 looks like a Lexus and feels every bit as luxurious as one. It’s got power on tap too, with a 224kW V6 petrol engine that pushes out 362Nm of torque, mated with an 8-speed automatic transmission.

The combination is pretty good, offers reasonably smooth gear changes and it all feels pretty seamless. It didn’t get cranky, even under harsh driving conditions either. The driving dynamics are not too bad overall, with some minor gripes.

Inside the level of luxury is amazing, although our test car, in Eclipse Black with an ivory leather interior had us questioning whether we could keep it clean. It’s fully loaded with everything from vented front seats to wireless phone charging.

We did struggle with the phone charger pad though as the phone kept sliding around and taking itself on and off charge; not ideal during the day but ghastly at night when the phone lights up every time it pops back on charge.

It has a full panoramic glass roof and therein lies one of the problems for the Camry SL; head room. The glassware means a headroom sacrifice that at 186cm for our tallest driver, we struggled with. It wasn’t woeful, but you noticed you were close to the roof.

Front leg room is excellent and there’s enough room in the back for three kids, or two adults very comfortably, although the headroom issue is present here too. Back there though there are some very nice creature comforts.

There’s two cup holders in the drop down rear centre console, two USB charging ports and some decent air vents, while up front there are two more cup holders, and there’s a bottle holder in each door.

The dash, which features some fake wood panelling, includes an easy to use 8-inch colour touch screen display, with Bluetooth and SatNav (with three years of complimentary map updates). But there’s no Apple CarPlay or Android Auto.

There’s a 10-inch colour HUD to ensure you don’t take your eyes off the road, and if you do, a full digital information display greets you to tell you everything you need to know while your watching the speedo and the cars other vital signs.

As one would expect, safety is also high on the Toyota agenda too and you’ll find a full suite here, including blind spot monitor, rear cross traffic detection, pre-collision warnings with pedestrian detection, active cruise control and automatic high beam.

You’ll also get seven airbags, and lane departure alert with steering assist. Turn it off. It’s awful. That aside, the boot is decent at 524-litres but the split fold rear seat openings are ordinary. It’s got a space saver spare too.

Inside, it comes with either black or ivory leather and our test vehicle was fitted with the latter. It hits the road at $48,948 drive away. It has a 5-star ANCAP safety rating and comes with a 3-year 100,000km warranty.

It also comes in a 2.5-litre hybrid option and a 2.5-litre 4-cylinder petrol option. The former could be the pick of the bunch, offering economy and luxury, but the latter, well, you can make your own call on that one. It’s not a 3.5-litre V6, let’s just put it that way.

Our test vehicle was provided by Toyota Australia. To find out more about the 2018 Toyota Camry SL V6, contact your local Toyota dealer.