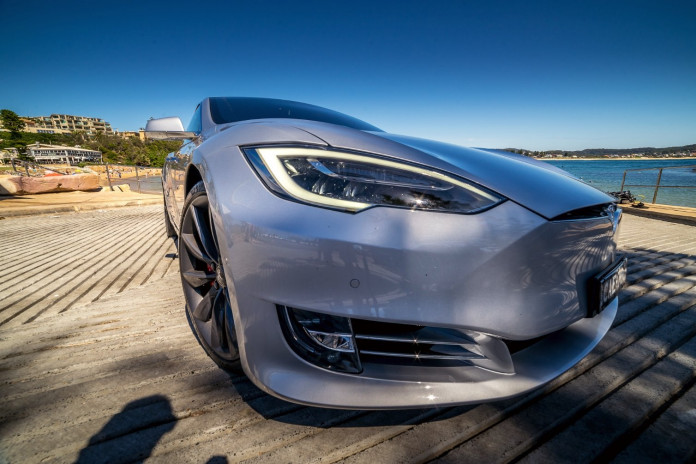 “OMFG, this thing is so fast it makes you feel sick.” We’re not spelling out what OMFG stands for, if you really don’t know or want to know, hit the search engines up. Those were the words screamed by an occupant in the 2018 Tesla Model S P100D.

That feeling of nausea comes from the insane G-forces that the Tesla is capable of. In Ludicrous Plus mode, or what we like to call Millennium Falcon mode, the P100D hurtles itself from zero to 100km/h in around 2.4 seconds.

While that’s nice to show off to your mates, you get tired of doing it over and over again and burning through battery charge.

It’s because the Tesla Model S and its full electric power system still carries a freak of nature persona for the average Joe, that you end up with people in your car telling you to ‘go fast’.

The fact it makes no noise whatsoever adds to that fear of the unknown mentality. As the owner of a super quick Tesla, we reckon you’d get sick of that real quick.

But something has changed in the last little while, and it sits with the brand’s perception, and a future that has more recently involved a multitude of car brands confirming pure fuel vehicles are dead, and they are switching to hybrid and full electric.

The game has changed, not just for Tesla but for the whole industry, and while Elon Musk and his sometimes crazy ideas might have pioneered vehicle electrification, the world is in, boots and all.

No more evident is that, than the number of people who, post their little ‘go fast’ ride or even without one, actually took the time to ask what the Tesla Model S P100D was like to drive, what the range was on charge, how much it was, what we liked about it, and what we didn’t like about it.

We’re going to call out one of the things we didn’t like about this car, early, because on the downside, there’s still no decent super charger on the NSW Central Coast, with the best option a destination charger like the one at Crowne Plaza at Terrigal.

That lack of super charger scenario north of Sydney is not doing the brand any favours with local uptake of its cars. Fear not though, we found it super easy to gain access to the underground car park at the luxurious hotel, just to charge the car.

Staff at the Crowne Plaza were more than happy to oblige our needs. Mind you, if you actually own a Model S or a Model X (the brand’s gull wing door SUV), you have a super charger at home anyway.

But if you’re travelling long distances and a Tesla is your ride, you may not want to spend the two hours of charge time you’re likely to need to get your electric mode of transport up to a virtual full tank again using a destination charger.

Worse still if you have to resort to normal power points, then you’ll need a few days.

Tesla is working to fix that as it gradually expands its national charging network but it’s just not there yet. We could bang on here about how other countries give incentives for people to switch to full electric and hybrid vehicles.

We could bang on further about how local service stations that used to provide people with the wherewithal to fill up their petrol and diesel cars, now also offer plug in charging, but that would be kicking the political football.

So let’s kick back to what you might call a traditional car review, and talk about the actual car. One thing to know straight up is that you don’t need to rush out and buy a new Model S each year, because there actually isn’t one.

Car upgrades, if you will, are done on the fly, via Wi-Fi, because put simply the metal shell and supple leather interior are just a vessel for a software system that tells the electric motors what to do and how to behave.

That’s the beauty of a fully electric car like the 2018 Tesla Model S, it’s essentially always a new car. Our test vehicle was in configured to full standard specification for what is the brand’s flagship model, the P100D, and was upgraded to 2018 spec while we had it.

It didn’t have all any of the add on options, but if you’re buying a P100D you are getting as standard, what the other models in the range, have as optional extras; things like the premium audio sound system for example.

You do get a lot of cool things for the price, although a cost north of $250,000 might scare some people away. The list includes adaptive LED headlights, power folding auto dimming heated side mirrors, and LED fog lights.

There’s two ISOFIX points for child safety, and a raft of active safety technologies including collision avoidance and automatic emergency braking, along with smart air suspension with GPS based memory so it can recall roads and adjust accordingly.

You’ll also find HEPA anti-bacterial filters on all inlet air vents, while the car is fitted with a bio-weapon defence mode, designed to block out harmful odours and toxins through two separate air purification systems.

All seats, yes all of them, are heated, as is the steering wheel, and the wiper blades have built-in defrosters and washer nozzle heaters. There’s a whopping 894 litres of storage space in the front and rear boots thanks to the lack of physical engine.

The list is long, and we could keep writing for hours about everything it comes with, including 400kWh of free supercharger credits per year (you have to pay after that, but it’s not expensive), and live, real time maps.

And before we go to the negatives, might we add that the active radar cruise control might just be the coolest thing in the car. Why? Because if the car in front falls below your speed, the Tesla is smart enough to change lanes and overtake.

But all is not rosy and this is not a love in for the future of electric motoring, as the Tesla has some issues.

The build quality is average in some ways. For example, when we popped the boot to look at the large boot space available to us in the back of the P100D, we noticed that the spray job on the boot lip wasn’t finished.

You could still see the red rust proofing underneath, and there were a number of spots where the silver paint had just not gone at all. It’s a common complaint if you go and look for it.

Poor build quality seems to be a hallmark of some people’s Tesla ownership experience, with door handles that don’t line up, bonnets and boots that don’t have equal or even close to equal spacing on either side when closed, and out of alignment interior furniture, that simply hasn’t been assembled properly.

We get that these cars are built on a small run basis, and that kind of process can see little things slip through the net, but some of these things are down right ridiculous and for the kind of coin you pay for a Tesla in Australia.

When you consider the Model S starts at around $100,000, and the top of the line model will cost as much as $300,000 once you option it up, it’s just beyond poor, and that’s before you even add in the on-road costs.

There’s also an astounding amount of heat pounding through the full glass roof, with or without being a sun-roof and in a hot Aussie summer kind of scenario, it’s way more than a little toastie.

There is a full glass roof as standard, or an optional sun-roof, and either 19-inch or 21-inch wheels to choose from. Five interior trim options are available, including four premium options, each with the choice of carbon fibre inserts.

Our test vehicle came fitted with the Ludicrous Speed Upgrade, the Premium Upgrades Package and what the brand considers its best interior option. It was not fitted with the Enhanced Auto Pilot or Full Self Drive Capability function.

In the format we drove it in, complete with carbon fibre rear spoiler, it retails for around $196,000 plus on-roads (which brings it up to around $258,000 give or take, once you add in things like a luxury car tax).

The Model S comes with an eight year, infinite kilometre warranty on the batteries and drive unit, and a four year, 80,000km warranty on everything else in the car, well almost, there’s a list of what’s covered when you buy one.

Our 2018 Tesla Model S P100D was supplied by Tesla (Australia). To find out more, contact your local Tesla dealer.