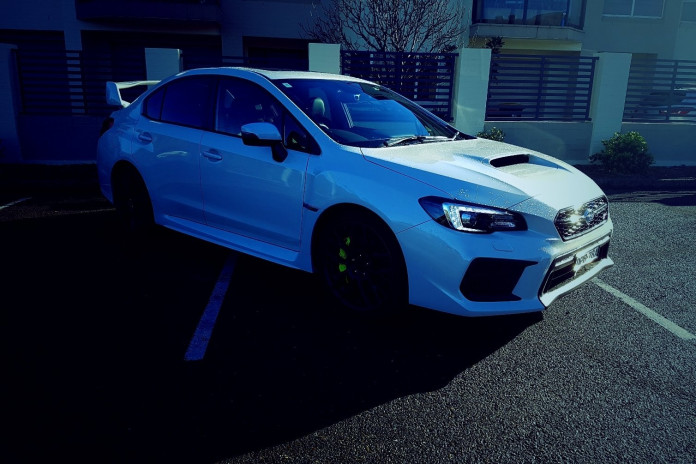 STRAP yourself in, hang on for the ride, dirt’s gonna fly, ground’s gonna shake tonight. The lyrics of Aussie country singer Adam Brand’s hit song, Dirt Track Cowboy, and an apt description of the huge bucket of fun that is the 2018 Subaru WRX STi Premium.

Let’s face it, this thing looks, sounds and drives like a rally car. It’s on-road performance is incredible, if not a little stiff. It’s a fierce bit of kit that has legend status the world over, and despite lots of safety upgrades, it’s still a rally car at its animalistic heart.

Powered by a 221kW 2.5-litre turbocharged boxer engine that pushes out 407Nm of torque, the WRX STi comes bundled with a drive-by-wire electronic throttle control system that helps it to a 0-100km/h time of 5.2 seconds.

Oh, and if you can’t drive a stick, as in a manual, you can’t have a 2018 Subaru WRX STi, because it only comes as a 6-speed manual, and that’s a damn good thing. It gives you greater control over revs, power and acceleration.

Not to be left out though, is a driver controlled centre differential, and Subaru’s hallmark symmetrical all-wheel-drive system, making sure you have complete control of just how hard or soft the WRX STi plays on the road.

Three preset drive modes give you the opportunity to run in intelligent, sport or sport sharp settings, with sport sharp representing the ‘wild child’ option if you will, where the STi Premium let’s its hair down and wants to play naughty.

But wait there’s more, and if you’re old enough to remember the Demtel advertising on TV, no the 2018 Subaru WRX STi Premium does not come with a free set of steak knives, but it does come with pretty much everything else.

Inside, there are cool features everywhere, including two separate screens; the first, a smaller one in the centre of the dash, shows things like boost and safety settings, while the second is the main infotainment system.

At 7-inches, it’s smallish by today’s standards (especially when you consider some vehicles now have 12-inch screens), and there’s still no Apple CarPlay or Android Auto, but it will talk to Siri if you plug your iPhone in.

That negative aside, the sound system – an 8-speaker hamon/kardon unit that includes a sub-woofer and amplifier – is wicked, and there’s SatNav, a CD player, full Bluetooth connectivity, voice control and two USB connections.

Despite the monster rear wing (which you can choose not to have), the WRX STi Premium is family friendly, sort of, and looks astoundingly good with its black and red leather interior, and STi badging, literally everywhere.

That ‘sort of’ family friendliness doesn’t extend to buckets of rear leg and head room for adult passengers. It’s good, but not great, if that makes sense. If you drive with the seat a fair way back, you’ll find yourself pressed up against your rear passenger’s legs.

Head room, thanks to the slightly low rear roof, also feels a little enclosed if you’re over 6-foot tall (or around 180cm). Staying on the downside of the STi Premium for a second, let’s jump back outside to the rear wing.

Personally we love it. But it’s also probably the most divisive thing on the entire vehicle. People who don’t understand the cult following the STi has, or that the rear wing is a signature part of it’s look, think the person driving it is a wanker.

And while we know that in 90 per cent of cases, nothing could be further from the truth, there’s that 10 per cent hoon/moron factor that wrecks it for everyone else, and a real perception that tosser’s drive WRX STi’s.

The 2018 Subaru WRX STi Premium hits the road at $61,770 drive away, with the big rear wing attached, and is a fitting farewell for what is expected to be the final STi in the current shape, as Subaru transitions to a brand new WRX.

It is also available without the rear wing, for those who like a less showy look and feel.

Our road test vehicle was supplied by Subaru Australia. To find out more about the 2018 Subaru WRX STi Premium, contact your local Subaru dealer.