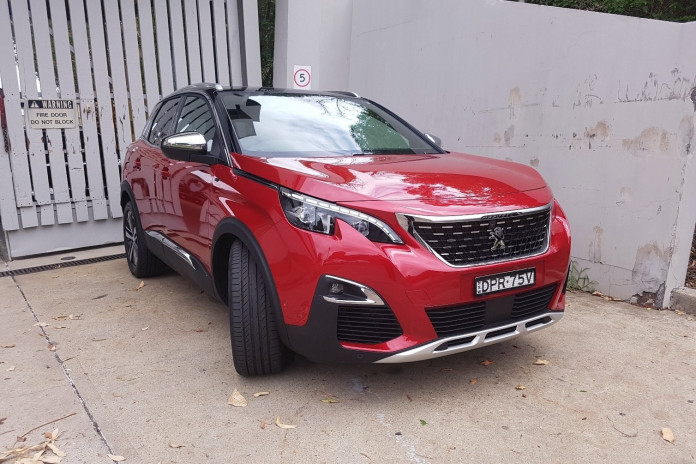 FORGET every single thing you know about the old Peugeot 3008, because this is none of those things. This is the all new 2018 Peugeot 3008 GT, a luxury performance mid-sized SUV, with a complete new look and feel.

For starters, it’s a 2.0-litre diesel that pushes this shiny new Peugeot around, pushing out 133kW of power and 400Nm of torque. Yes that all sounds wonderful, but far more interesting is the 4.8-litres/100km fuel economy – and no that’s not a misprint.

It really does push those kind of numbers. While some days of hard driving saw numbers more in the mid-6.0 litre range, when we drove it like someone who wasn’t doing a road test might, it stuck between 4.8 and 5.3-litres/100km, which is impressive.

Coupled with a 6-speed auto gearbox, the 2018 Peugeot 3008 GT is front-wheel-drive only but it’s a pretty effortless vehicle to drive, and when you switch it to sport mode, it gets plenty of grunt up and accelerates harder than we were expecting.

That said, the power plant in the GT doesn’t sound fantastic when sitting idling, think tradie ute, but get in and drive it before you pass judgement, because on the road, it’s one of the quietest diesel’s we’ve ever driven, and it never seemed to do it tough either.

Gear changes, especially down shifts, can be a bit ordinary at low speeds, but overall, the GT performed exceptionally well. It looks good outside too, with what can best be described as a very unique looking front grille.

Jump inside, and before we talk about the actual interior, we need to talk about the technology the Peugeot 3008 GT is bundled with, because quite frankly, it’s amazing.

From the massage system for the driver, to the air deodoriser that operates automatically to keep the 3008 GT smelling fantastic, the French car maker has literally thought of everything, and made it all work together harmoniously.

The infotainment system features 3D navigation, Wi-Fi, Bluetooth, USB, DAB, Apple CarPlay, Android Auto and Mirrorlink, and you can even open emails off your phone and receive text messages, and using voice recognition, send some responses.

Getting away from the technology and looking at what’s inside the 3008 GT, the first thing you notice is the quilted leather seats, and the monstrous panoramic retractable glass roof, oh, and the little hints of luxury everywhere.

The dashboard, and front and rear door panels are finished in grey Alcantara leather, and both the front and rear centre consoles feature two cup-holders. There’s loads of boot space too, some 591 litres in all.

The 2018 Peugeot 3008 GT features a ‘magic flat’ split fold rear seat with boot accessible controls and even the front passenger seat can be laid flat to increase the sheer load space 1,670 litres, should you need it.

As an added bonus, autonomous emergency braking is now standard across the 3008 range, and operates by detecting stationary or moving cars and trucks, and pedestrians, and providing braking assistance to avoid collision.

It’s got some stiff competition, with serious players in the same space, including the Mazda CX-5, VW Tiguan, Kia Sportage, Hyundai Tuscon, Renault Koleos, Subaru Forester and the Ford Escape.

But as the top-of-the-line in the 3008 four variant line-up (the other options are the Active, Allure and GT-line), it has the props to be a better option on luxury and technology alone, than most of its competitors.

It also comes with a 5-year warranty and road side assistance program.

Our test vehicle was provided by Peugeot Australia. To find out more about the 2018 Peugeot 3008 GT, contact your local Peugeot dealer.