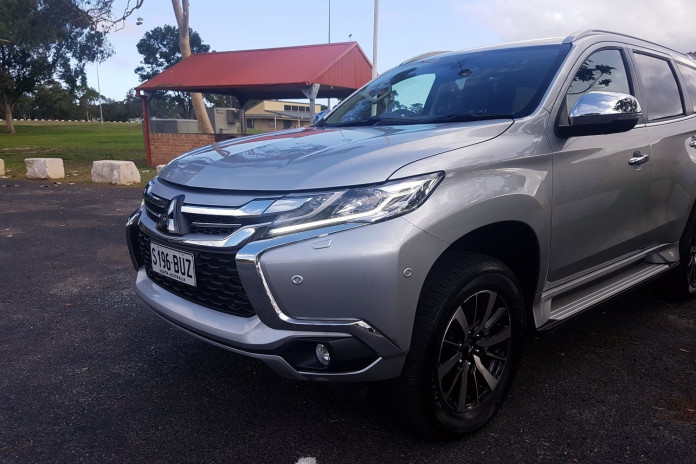 THE age old question of how best to describe an SUV that rides on a ute platform rears it’s head when you jump into the 2018 Mitsubishi Pajero Sport Exceed; the 7-seat only AWD offering from the Japanese car maker.

Based on the Triton and once known as the Challenger, the Exceed version is the pinnacle model atop a three variant tree that also includes the 5-seat GLX and GLS (the latter has a 7-seat option), all with an 8-speed automatic transmission.

At $56,990 drive away it offers a bucket load of features for the price, and sits squarely up against the Holden Trailblazer and and Isuzu MU-X, in a category that also includes the Ford Everest and Toyota Fortuner.

Unlike some of its rivals though, Mitsubishi offers just one engine configuration across the range, with all Pajero Sport models powered by a 133kW turbo-diesel 4-cylinder that produces 430Nm of torque. Claimed fuel economy is 8.0-litres/100km.

That torque doesn’t give you all the rabbits until 2,500rpm though, which makes it feel a little under powered, and engine noise as you accelerate also means there’s a sense of agriculture about the Pajero Sport Exceed, amid a nod to its Triton roots.

Updated for 2018 though, the new look Pajero Sport Exceed offers an exceptional ride both on and off road, and is more than capable of matching it with the other players in its class on that basis.

It’s got a brand new look, more refined shall we say, with a sharper, neater looking front end, and what can best be described as a polarising bum. Some people will absolutely hate the new rear lighting setup, but for us, it set the car apart, and it’s kind of sexy.

Sure it covers a significant portion of the back-end, and at night makes it stand out like nobody’s business, but what’s wrong with a little different in the car world right, it’s better than same-same all the time.

For off-road, there’s a selectable 4WD system and multiple pre-programmed modes, as well as a rear diff-lock. It has a 3,100kg braked towing capacity and an exceptional 310kg tow ball weight.

As we said already, the off road ride is great (the steering not so much, either on road or off road) but it’s more than capable for rock crawling, or some rugged dirt running, should the need arise.

There are some six cup holders and four in-door bottle holders, and the Pajero Sport Exceed has dual zone climate control. Some things bugged us about the Exceed though, particularly as it’s meant to be the top of the line.

Among them is the fact there’s no SatNav, and you have to rely on plugging in your phone for Apple CarPlay and Android Auto for mapping. The interface for the phone cable is not ideally situated either and there really isn’t enough room for a larger phone.

Want to put the window down? You’ll need to be a contortionist for that too. The power windows, which are great, are controlled by the usual up and down buttons, but there’s a whopping great door grip/handle across the front of them.

We also discovered that the only way to release the third row seating for use is from the boot; painful when you’re juggling kids. While we’re discussing the third row, using that space will wipe out the boot completely as well and it’s damn close to the tailgate.

Our test vehicle was provided by Mitsubishi Australia. To find out more about the 2018 Mitsubishi Pajero Sport Exceed, contact your local Mitsubishi dealer.