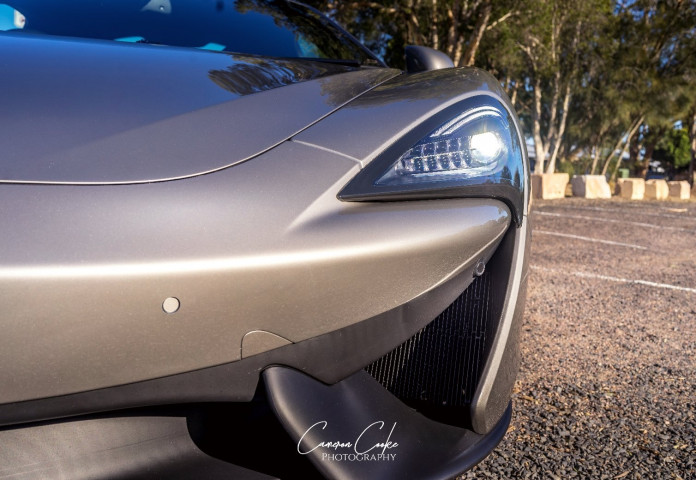 IF you’ve ever wondered what it would be like to shrink yourself down to slot car size and zoom around a Scalextric track at full noise then we have the car for you. The lightning quick 2018 McLaren 540C.

Everything about this car screams performance; the heart racing 3.8-litre twin turbo V8 generating 397kW of power and 540Nm of torque; the paddle shift manual available at the push of a button, and track mode.

It’s got crazy good grip levels and driving dynamics, and the handling is, in a word, magnificent. That said, you can still break traction in sports mode (or even normal mode) should you so desire.

It’s wickedly fast, fast enough that even if you don’t normally swear, this car will make you swear; and grin like a little school boy the first time you kiss a girl, or vice versa. We’re talking 0-100km/h in a blistering 3.5 seconds.

It’s the little brother to the 570S (they share the same engine and 7-speed dual clutch gearbox with the 540C slightly de-tuned) and if there’s such a thing, is meant to be the cheap model within the astounding McLaren Sports Series performance car range.

It was also optioned with a lift kit which raises the ride height at the push of a button to get over speed humps and up driveways, reverse camera, front and rear parking sensors, branded floor mats and a McLaren car cover.

The McLaren 540C has an incredible 1,350kg dry weight, thanks to its carbon fibre construction. Built using the MonoCell II rigid chassis that weighs less than 80kg and provides exceptional crash protection and outstanding dynamics.

The lightweight construction coupled with the mid-mounted engine also provides one of the best power-to-weight ratios of any sports car in its class. It’s that combination, and the amazing gearbox, that make it a joy to drive.

In normal drive mode, you really don’t notice gear changes at all. Put that raised eyebrow down, we’re serious, you genuinely don’t notice it’s switched gears. The throttle blipping on the downshifts is damn near perfect too.

Throw to Sport mode and the throttle response goes next level, as do the gear shifts, both up and down. Dive on the brakes and it’s here you’ll notice as it downshifts and does it’s thing, making you feel like a real boy or girl racer.

Track mode is like taking everything we’ve talked about in this story, and attaching it to a Exocet missile. This thing goes to war with itself in track mode; it’s like unleashing a demon child – and it’s awesome.

Right then, enough about the performance because you could actually own a McLaren 540C and use it as your daily drive, we kid you not. Thanks to the lift kit, and the 144-litre boot under the bonnet (it’s mid-engined remember), it’s genuinely quite a practical car, providing you don’t need to fit kids in.

It’s pretty cool inside though, with a not quite black, not quite grey interior, with orange stitching, that matches the underside of the dash, and in a wow factor moment, that colour is also mirrored on the key fob.

The seats are comfortable, but not unlike say a Lotus Exige, you will need to almost scissor yourself in over the gigantic door sills and narrow door openings. It does have wickedly cool lift-up doors though.

The infotainment system, which features everything from SatNav to pretty much all the controls for the air-conditioning and other functions of the car, can be tricky to use, and somewhat painful to navigate, but it does the job once you’re used to it.

If it has a flaw, it’s in the fact that it’s a bit soft for noise. Park it up and give it a rev, and even with the optional sports exhaust, it kind of lacks a big ballsy V8 sound. Yes we know it’s a small capacity V8 with two turbos, but we feel like it should shake the trees.

We managed to get it to do just that once, after messing around with the settings combinations between Sport and Track modes, at the kerbside, but with a car like this, you kind of want that sound to be its persona.

It’s a little thirsty too, not in a skull a beer in front of your mates way, more in the sneak a swig from the 20-year-old vintage scotch kind of way. It should pull 10.7-litres/100km according to McLaren, but with all that sneaky drinking, it’s more like 13.5-15.5.

Did we mention the customisation though? There are an insane 35 colours to choose from for your shiny new 540C, including McLaren Orange, Mantis Green, Curacao Blue, Volcano Orange, Sicilian Yellow and Mauvine Blue. Just two colours are standard.

There are four wheel design choices, with a multitude of colour options within them, two brake rotor options, six caliper colour options, two tyre options, a whole bunch of custom designed interiors and a host of add-on packs.

We’re not done yet though, as there’s also three different audio packages, and the option to add track telemetry systems as well. That’s before you take up the option of going full bespoke on the design of your 540C, which raises the bar once more.

Our test vehicle was supplied by McLaren of Sydney/Trivett Bespoke. To find out more about the 2018 McLaren 540C, contact the McLaren dealer in your State.

2018 McLaren 540C pictures courtesy of CMC Photography. For the purposes of this review, as the McLaren is a 2-seater, we’ve changed Family Friendliness to Practicality.