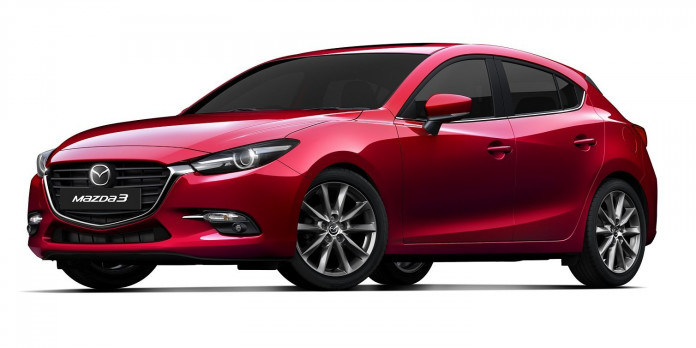 THE presence of Mazda in the small car market has always been that of a dominant Sumo; they’re the big player, willing to push their opponents about and even push them out of the ring, with a quality product in tow.

The Mazda3 has a long and storied history too, that goes all the way back to the 323, before becoming the Mazda3 in the early 2000s, and bringing with it exponential sales growth that has made it one of the most popular hatches on the market.

The secret lies in the standard specifications. From the entry level Neo to the range topping Astina (and even the now defunct MPS performance hatch), Mazda outguns its rivals with just how much it includes.

They’ve also loaded in adaptive cruise control, lane keep assist, and an electric sunroof. That’s on top of features carried over from lower grades, such as key-less entry with push button start, leather trim and automatic headlights and wipers.

We’re not finished yet either, because you can add in blind spot monitoring, rear cross traffic alert, auto high beam, rear parking sensors and rear view camera, along with an electric park brake.

As for the infotainment system, you can’t fault its usability, well actually you can, for a couple of reasons. The navigation system is incredibly slow to load, and our two favourite connectivity functions, Apple CarPlay and Android Auto, they’re missing.

That aside, it does feature a touchscreen when you’re stopped and rotary dials and shortcut buttons for when you’re on the move. The ‘MZD Connect’ also powers the GPS system, and you can plug in an iPhone or Android device for music.

It even supports MP3-compatible devices too. Remember them? Another pain point in the Mazda3 is the HUD. We couldn’t find a way to shut it off. It’s a pop up screen rather than a projection and for the life of us, we simply couldn’t make it go away.

It does have a very clean digital/analogue instrument cluster though, and the leather multi-function steering wheel, borrowed from the MX-5 is easy to use and comfortable to steer with.

The inside of the Mazda3 SP25 Astina is a pretty classy place to be, despite an average headliner and the prevalence of metallic grey paint. Rear head and leg room is pretty ordinary too and there’s no air vents or power outlets back there either.

The rising window line also means outward visibility in the rear isn’t great for shorter passengers like kids, and the thick C-pillar creates a blind spot when reversing (thank the Lord for that rear cross traffic alert).

On the outside, the ‘3’ has aged rather well though, particularly when you consider there hasn’t been a major overhaul of the design since it launched in 2014. The rear gets a fastback style tailgate and subtle roof spoiler, also scoring exposed dual tailpipes.

It’s driven by a 2.5-litre naturally aspirated 4-cylinder that pushes out 138kW of power and 250Nm of torque, that can be butted up against either a 6-speed manual or a traditional 6-speed automatic.

Our test vehicle had the auto gearbox and on an overall performance front, the Mazda engine lacks the low down torque it’s turbo charged rivals have, but it’s willing and free revving, and is by no means sluggish.

The motor can get a little noisy under hard acceleration, and getting up to freeway speeds quickly requires a decent stab at the accelerator pedal. Sport mode delivers a sharper throttle response too.

Mazda claims 6.5-litres/100km on the fuel economy scale, but we couldn’t even get close, struggling to get below an 8.5-litres/100km during testing. The steering is also a highlight, with good feedback, despite being weighted on the lighter side.

It’s beautifully direct as well, meaning you can take corners with confidence, while navigating city streets and tight car parks is a breeze. Another strong point is the ride quality.

Despite not having a local suspension tuning program, and the fact it is riding on 18-inch wheels and low profile rubber, the Astina finds a wonderful balance of comfort and dynamics.

However, the Mazda3 still lacks decent insulation from road noise and while you could turn up the volume on the solid Bose sound system, it really doesn’t fix what has been a long time problem for the Japanese car maker.

Up against the likes of the new Hyundai i30 and Toyota Corolla, and with a new Kia Cerato hatch due in November, Mazda’s place as one of the market leaders could be under serious threat. Not for long though, with a new Mazda3 set to be revealed soon.

When it is, it will feature the new SkyActiv-X compression ignition engine. But enough about what the future holds. The 2018 Mazda3 SP25 Astina is priced at $35,490 plus on-roads and comes in three SP25 spec levels.

Our test vehicle was supplied by Mazda Australia. To find out more about the 2018 Mazda3 SP25 Astina hatch, contact your local Mazda dealer.