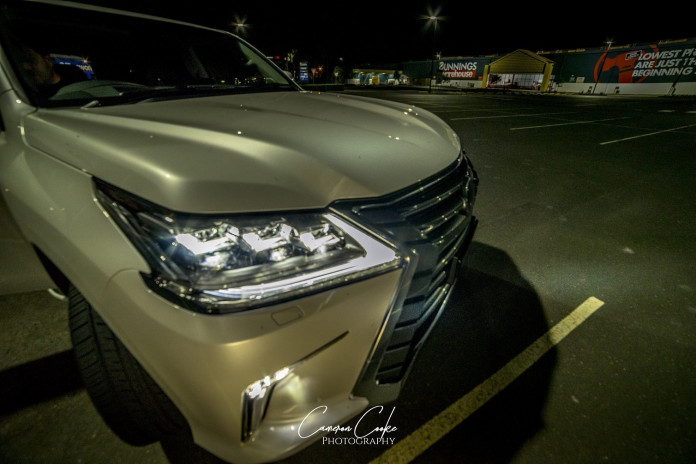 TAKE one Toyota LandCruiser, and coat it in luxurious glaze, add some extra sound proofing and remove every possible vibration. Now swap the badge on the front for one from luxury car maker Lexus, and voila, you have the 2018 Lexus LX 570.

Lexus has built on the incredible global good will of the LandCruiser, and lavished it with gear and top shelf finishes, to create a truck with off road skills, comfort and capability, and no flowery buzz words.

Inside, the cabin offers genuine upmarket luxury, with a massive screen dominating the instrument stack (more on that later). Buttons are all high quality glossy plastics, and there’s tuxedo friendly leather and wood everywhere.

Plus, Lexus’ fantastic Mark Levinson audio system is on board too, delivering sound that’ll blow the doors off, should you want it to. It’s a proper 8-seater, with terrific room for the front five passengers.

Third row riders will need to be small though as the rear seating is really only designed for youngsters. With those rear seats folded away, the LX has a high riding cargo space that’s narrow, a consequence of its tough off road hardware.

Electrically folding the third row seating from the boot gives you a load space of 1,220-litres, while dropping the second row expands that offering to a massive 2,074-litres. Even with the third row up, there’s still 259-litres of room.

Seats are well cushioned throughout and very pleasantly styled. While you’ll also find liberal use of cheaper plastics around the cabin, particularly in the boot, we’ve always been impressed by the plush carpet on the floor of every Lexus.

It makes it a pleasure to drive when you’re just chilling in thongs (flip flops for the other half of Australia) on the weekends. Truth be told though, not a lot has changed on the LX 570 since its last major overhaul back in 2015.

Along the way, there have been minor updates like alloy wheel colour changes and rear seat entertainment surrounds, but even Lexus cites the key change as being the addition of pedestrian detection to the pre-collision warning system.

The list of standard features is simply ridiculous and far too extensive to include here, but you name it, it’s got it. A 12.3-inch super sharp floating screen takes centre stage, but it still uses Lexus’ clumsy mouse like controller that just never feels intuitive.

That said, there’s everything from key-less entry/start, to quad zone climate control, with ventilation for all three rows. Other goodies include a crystal clear head up display and easy entry hydraulic suspension that drops or raises the vehicle at the touch of a switch.

Safety is also high on the agenda, with the LX 570 benefiting from a host of the very latest active systems including active cruise control, lane departure warning, and blind spot monitoring with rear cross traffic alert.

Pedestrian detection automatically applies the brakes between 10–80km/h if it detects a person, or up to 180km/h if a vehicle is detected.

All this luxury prime beef comes at a price though, and things like the approach and departure angles are not overly off road friendly, unless your just cruising along Fraser island. Any ruts or articulation work, say good bye to your front and rear bars.

It’s also a huge vehicle, at almost 5.1-metres long, nearly 1.9-metres tall and just under 2.0-metres wide. The LX 570 has an intimidating road presence, particularly if you happen to be stuck behind it in your affordable family hatch.

And it’s not just the sheer size of this monster that demands attention, it’s also that gaping dubbed spindle grille. It’s heavy too, it still rides on an old school ladder frame chassis, meaning it weighs up to 2.7 tonnes with the additional features pack.

But, it can also tow up to 3,500kg, as well as being armed to the teeth with proper off road technology. It’s powered by a heavy-drinking 5.7-litre V8 petrol engine that produces a comfortable 270kW of power and 530Nm of torque.

It’s no firecracker given the sheer heft of the vehicle, but it is beautifully smooth and refined. A downside is the fuel it drinks. Lexus claims a still guzzling 14.4-litres/100km, but the best we could manage was a whopping 22-litres/100km.

There’s a drive mode selector that gives you a choice of five settings, and the power plant is coupled with a seamlessly shifting eight speed auto. Sport and Sport+ modes provide smooth yet angry if you need it.

In any one of the less aggressive drive modes, there’s a good deal of body roll at play; a subtle reminder of the physics of the big SUV. Sure, this tendency is reduced in the sportier drive modes, but you’re always aware of the 570s size and weight.

Get it dirty and there’s an arsenal of off road assistance, including crawl control and turn assist. You’ll have a choice of seven colours to wash the mud off, including Titanium Silver, Mercury Silver, Classic Black, Starlight Black, Metallic Silk, Deep Blue and Sonic Quartz.

Overall, the LX 570 is a bit of an oddity. It’s not the kind of monster SUV you’d throw head long into the world’s harshest climates, even though it’s more than capable off road. It’s more likely to be a major crowd favourite with city slickers who want a monster SUV.

Our test vehicle was supplied by Lexus Australia. To find out more about the 2018 Lexus LX 570, contact your local Lexus dealer. Lexus LX 570 pictures courtesy of Cameron Cooke Photography.