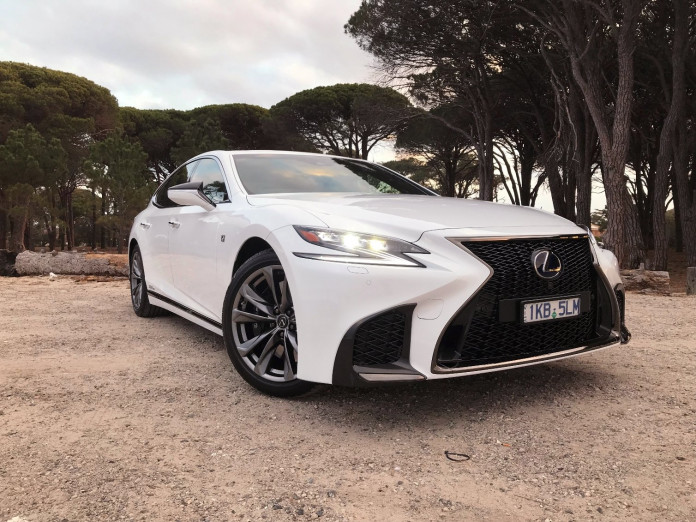 The 2018 Lexus LS 500h has landed in Australia to continue its place as the flagship large sedan for the Japanese car maker, touching down with some seriously cool tech and a new look exterior and interior.

You might almost say the new LS screams “stuff what we have done in the past, wipe the slate clean and start again. Retain nothing except the badge”. It feels and looks that different.

Straight up we are talking more than $200,000 for this machine (drive away), and we know you’re asking yourself right now; is it worth that?

Well with only two gripes to speak of, we definitely think it’s worth it, especially when you get deep into all the tech it has, but more on that in a moment. First to those two points we didn’t really like.

One is the lack of a rear wiper, and while we know this is a sedan, it has a seriously angled rear end, and a rear wiper would have been extra handy in the rain, but really, that’s a nothing gripe.

The other could have been specific to our test vehicle or is just a nuance in the hybrid system; did we mention this is a hybrid, that’s what the ‘h’ stands for, but you knew that already. We noticed there was a clunk every now and then when driving.

After some detective work and much discussion, we think we narrowed it down to the car switching between battery drive and powered drive, and if that’s the case, it’s a little disappointing in a car of this calibre and price tag.

Those two things aside, it is a really pretty car; a car that Lexus spent some 1,400 man hours perfecting. Everything flows seamlessly with ultra refined precision and it’s that level of design that makes the LS a standout.

Among the highlights are the triple-beam headlight clusters; a technical marvel that looks amazing, with the cluster all condensed into a sharp Z shape that cheekily has layers of the Lexus logo hidden in it; a trick again used on the rear light clusters.

All this design perfection has been gun-sighted by a Lexus engineer at the end of production. No seriously, they have a Japanese dude with white gloves on that walks around your car to give it the green light for perfection, before it’s allowed to leave.

The finished product is outstanding to look at, precise, imposing, and luxurious all in the same package. We had the F Sport upgrade of the hybrid, which gave us 20-inch rims that were beautiful to look at and gave the car a great ride.

Inside, our LS 500h sported a primarily black finish with naguri-styled aluminium highlights, but if we were choosing from the available options, we’d take the origami-inspired crimson fire hand cut Kiriko glass inserts, with black leather accented seats.

There’s a full digital dash, with the sliding mechanical ring we know and love from the GS F and RC F, an outstanding full colour HUD and the infotainment system has had some improvements over its sister models as well.

It’s the little things that make you have moments of cool inside this luxurious saloon, from the floating door arms to the back lit LEDs, it oozes quality. Unlike most hybrids though, there’s no tiny engine pretending to be a generator.

The LS 500h is packing heat, with a 3.5-litre V6 that can charge the batteries or direct drive the wheels, or do both, thanks to the Lexus Multistage Hybrid System, which is, well hard to explain, but we’ll give it a go.

It only has four mechanical gears, but coupled with some Japanese magic, it makes it feel like you have ten, and they are not all rubber band-esque like a CVT, they are defined, yet seamlessly smooth.

The LS 500h has it all, speed, handling, ride, comfort; lots of big ticks, with virtually zero engine noise when cruising. But it’s got plenty of punch too. if you feel the need to throw down, there’s 264kW of combined power and more torque than you can poke a stick at.

It’s got sleeper written all over it from a performance perspective. The kind of car people look at and think; righto, it’s got some great style, but it’s big and slow right? Wrong. Sport+ mode will happily invoke the angry buried deep inside the LS 500h.

But you might not hear it, because your 23-speaker Mark Levinson sound system will have drowned out the minimal noise it actually makes under full power. It’s an oddly Zen-like experience, that makes you smile as you pull away from other road users.

Put simply, it has bags of power if you need it, and Sports+ mode adds some much needed sports sedan stiffness for shall we say, more grin-enriching requirements. Much needed because in other drive modes, it does feel a little like a boat sometimes.

It’s a big car, and for the most part, it has comfort oriented suspension, combine the two, and it feels like it wants to float. It’s not so bad that you wouldn’t own one in a heartbeat, but it takes a little getting used to.

It’s astoundingly efficient too, we achieved 6.5-litres/100km without even trying. But we’re going to get a little nerdy now, because we actually think one of the coolest features in the LS 500h is the intelligent high beam.

Let us explain why though. You know what auto high beam is right, sensors in your car detect oncoming vehicles and turn high beam on and off as needed. Cool right. Now take that next level, and give the lights the ability to adjust individually.

In reality, the system dims the light closest to the oncoming car and keeps the light further away from the approaching vehicle at full beam, if it senses it can do that without affecting the oncoming vehicle.

It’s that level of detail and technological advancement that can be found throughout the LS 500h and make it such an incredible vehicle. When you buy one, you can choose from eight exterior colours, with some next level interior options too.

Update: Following our review of this vehicle, Lexus has added further enhancements to the safety features of the car, including pedestrian alert and active steering assist.

The new pedestrian alert operates if there is a possibility of the vehicle colliding with a pedestrian ahead. The position of the pedestrian is shown in an animated graphic on the vehicle’s head-up display, aiding the driver’s intuitive recognition of the situation.

Active steering assist is designed to determine when there is a high possibility of collision with a pedestrian in the lane of travel or with some continuous structures, such as a guardrail, and take evasive action.

Our test vehicle was supplied by Lexus Australia. To find out more about the 2018 Lexus LS 500h, contact your local Lexus dealer.