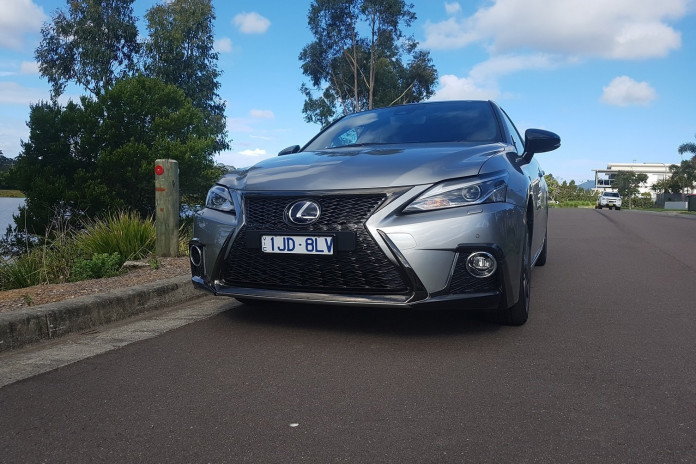 PACKED with interior updates, innovative new equipment and much more aggressive styling, the 2018 Lexus CT 200h F Sport feels less like a posh Toyota Prius with a higher price and better materials, and more like the hatch it should be.

A year ago, we tested the 2017 Lexus CT 200h F Sport, the exact same model, but kitted out prior to the latest upgrade. It was disappointing overall, and fairly underwhelming for what is touted as a more sporty hybrid than its competitors.

It didn’t have a lot going for it because it’s based on a Toyota Corolla, it’s not really a performance hatch, and it’s bundled with a CVT gearbox. Hardly a recipe to satisfy an enthusiast’s appetite.

Step forward to 2018, and while a number of those factors haven’t changed, with Lexus choosing not to create a whole new CT 200h, rather simply choosing to again upgrade the existing model, this is definitely a different beast than before.

There are new wheels across the variants, with 10-spoke 16-inch dark metallic rims on the lower grades, and super stylish 17-inch wheels for the F Sport. The rear end also gets new LED tail lights in an L-shape, and a new lower rear bumper.

But it’s still the same drive train, with the CT 200h still packing the same Lexus Hybrid Drive petrol and electric engine combination, with the 1.8-litre 4-cylinder petrol motor pushing out 73kW of power and 142Nm of torque.

This is married to a 60kW electric motor that adds a further 207Nm of torque, with the two combining for a maximum combined power output of 100kW. Fuel economy is fantastic at 4.1-litres/100km, with an incredible range of around 600km.

The power output is on par with a base model Toyota Corolla, and the transmission was remapped in the last upgrade for last year’s 2017 model, providing a more linear build up of revs.

We’re not really sure how much that’s helped, but the CT 200h definitely feels a little more responsive under acceleration than it did before. That said, the story is not the same when you’re trying to launch off the line at the lights.

Once the transmission has finished connecting itself to the ECU and engine, and realises you want to move, the lights have gone red again or the gap in the traffic has disappeared. In Sports mode, you might have a slightly better chance.

For the hybrid uninitiated, when starting it up you may find yourself wondering if you hit the button hard enough. You will sit there turning the car on and off, not realising its on, because there’s no noise. It runs full electric at start up.

If the instrument panel lights up, even if you can’t hear anything you can be assured you’re good to go. Just choose one of the four driving modes that includes EV – or full electric mode, which works at speeds up to 45km/h for around two kilometres.

However, thanks to the CT’s regenerative braking system (which collects braking energy and stores it in the battery), you can easily travel twice that distance in slow city traffic or on quiet urban roads.

In EV mode, the CT is reminiscent of a tram, quietly (and somewhat addictively) whirring and whistling as it accelerates and brakes. It’s quite amusing to watch pedestrians who don’t hear you coming realise you’re there and panic as they dart across the road.

The other drive modes are as you might expect, Eco, Normal and Sport.

Around tight corners on winding bumpy roads and up and down hills, the steering is well weighted and responsive thanks to performance dampers, while the electronic power steering system has been revised to fit changes to the suspension and chassis calibration.

Body roll feels minimal and it’s easy to handle on urban roads, but weighing in at 1440kg, the CT 200h is a little chubby for a small hatch. GVM tops out at 1,845kg and you can feel that when you attempt an overtake, or climb a small hill.

We know that not everyone likes to drive hard, be on the edge of their seats every time, or hear the engine at full noise screaming round some tight twisty corners, but being an F Sport you sort of expect some or a little of it.

Inside, is where the real fun kicks in for the new version of the Lexus CT 200h. What can we say, other than wow. Lexus have done a fantastic job revamping the CT’s interior and adding emotional and aggressive touches.

From a split level dashboard console layout offering a clean and user friendly feel, despite a lot of hard grey plastic, to the popping red leather seats with matching trims, it feels super sporty inside.

The seats feel spacious and supportive without being overly soft, whilst the leather is supple and smooth, coupled with that fantastic new car smell (you really can’t beat that smell right?).

Enhancement 1 gives you a tilt and slide moon roof, while Enhancement 2 adds a 13-speaker Mark Levinson audio system and Smart Key Card for easier vehicle entry to the moon roof.

Things remain funkier at night in true CT 200h style, when occupants are met by a dazzling array of light and colour.

The centre console includes USB and AUX ports, but trying to stow your phone somewhere remains an issue, especially if you have a larger “phablet” style smart phone, and manufacturers really need to start addressing this issue.

The sunken driving position is in sync with the console ergonomics, with the cluster of buttons sloping gently down from the dash. For us, at the wheel, everything was at our fingertips and there was no need to lean forward or sideways to do anything.

There is an adjustable electric driver’s seat, front seat heaters (no seat ventilation though like other F Sport models), auto high beam (with LED), and a host of safety features, including pre-collision safety and radar cruise control.

Overall, the CT 200h is a comfortable suburban cruiser and the upgrades have taken its styling and sporty look to a whole new level. It’s now the best looking hatch in its class and Lexus has managed to revamp the hybrid in a tremendous way.

We just hope that the next version is “all new” from the ground up, and Lexus show the world what they are really capable of with their other Hybrid technologies and designs by building on the new look and feel creating in the 2018 version.

The 2018 Lexus CT200 h starts at $46,786 (drive away), while our test vehicle, an F Sport with both Enhancement packs, hits the road at $61,474, finished in the cool looking Mercury Grey with a black roof and F Sport Flare Red and Wedge Metal interior.

Our 2018 Lexus CT200h F Sport was provided by Lexus Australia. To find out more about the CT200h, contact your local Lexus dealer.