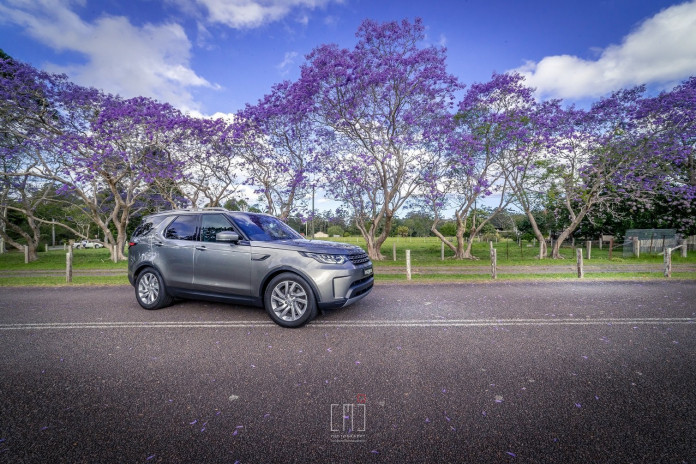 IN the past the Land Rover Discovery has been referred to as the Swiss Army knife of the automotive world. This, after all, is a luxury vehicle that is capable of carrying seven adults with room to spare, and is packed with gadgets.

It’s also as capable off road as it is comfortable thundering along a motorway.

The latest Discovery might look somewhat sleeker than its square edged predecessor now that it is based on the Range Rover platform, but Land Rover has assured customers that it’s still the same capable Discovery that everyone loves.

All of that surely means it’s just a little less rugged than the cars that have gone before it, right?

Before we go any further, we have to talk about the elephant in the room. Land Rover has been copping some flack for it’s rear end on the new generation five Disco, and lets be honest, it is hideous (well in our opinion anyway).

Viewed front on, the new Disco looks smooth and powerful, with a narrow bonnet that drops into the flared arches of the front wheels, adding instant road presence. But look at it from the rear end, and that’s a different story.

We had it described to us by a punter who was walking past us during the photo shoot as being Tarago-esque, with a hint of HR-V. But let’s move on, and deep dive into the new Discovery TD4 SE, and see if it really meets the expectations of its avid followers.

There’s three diesel power plants on offer, and each pairs with an eight speed automatic gearbox that channels power to all four wheels, and the Discovery TD4 SE we drove had the 2.0-litre four cylinder turbo charged Ingenium power plant.

The Disco does a good job propelling the two-plus tonne vehicle with poise and punch, but does have a considerable amount a lag when you push down on the throttle, which we’re putting down to turbo lag and the fly-by-wire throttle control.

Either way it was definitely annoying and has the potential to be a little dangerous if you decided to push yourself out of an intersection and needed that little bit of extra get up and go to move across traffic.

We have no doubt that Land Rover has faced a near impossible challenge with the new Discovery. To replace the legendary Defender as the brand’s most capable offering while softening its image and improving its road manners for less outdoorsy customers.

Not an easy feat for any car maker, but for one that has so many purist fans amongst its long loyal customer base, as we said, potentially near impossible, but let us be the first to say, we think they’ve done it.

When you put its tyres in the dirt, the Land Rover really comes to life. We tested it over some steep rocky terrain, complete with washouts and loose gravel and it really excelled, and felt right at home in the mud and dust.

With a maximum 283mm ground clearance, 500mm of wheel articulation and a wading depth of 900mm (which is 200mm more than outgoing model), along with air suspension on all but the entry-level S, it was a definite performer.

Our shiny Silicon Silver 7-seater test vehicle also came with the larger rim and lower profile tyre combo that is so prevalent in premium level SUVs, and the higher sidewall, semi off-road spec tyres on the 18-inch rims also give the car a distinct character.

As with most modern 4×4’s the Discovery has a number of electronic aids to assist with off-road obstacles, with multi terrain assist providing a range of pre-programmed options to almost autonomously guide you over rough ground.

You can also set a crawl speed while negotiating difficult terrain, with the terrain response system optimising vehicle settings for a range of conditions including general driving, grass, gravel and snow, mud and ruts, sand, and rock crawling.

Once you’re ready to descend a rocky slope and ensure the correct terrain mode is engaged, the Land Rover serenely ratchets itself down any type of terrain you care to throw at it.

Inside the Disco, it’s reasonably familiar to anyone who has sampled any type of Land Rover product over the last couple of years. The eight speed gearbox operates via a rotary dial that rises from the centre console in alluring fashion (it’s super cool).

There’s also a large touchscreen in the centre, which controls the majority of the car’s functionality, and a regular two dial instrument cluster sits ahead of the driver.

The new InControl Touch infotainment system feels out of place in a new build model, feeling a little dated; the result of some genuine difficulty in making it behave right, and an odd lag in responsiveness.

The interior is tastefully understated, covered with premium materials, and the dark headlining shrinks the car around its occupants. We suggest you don’t choose the all black interior though as it feels a little bland.

It’s a very long vehicle, even by SUV standards, which does mean there is a decent amount of room inside the cabin, and facilitates array of flexible options, all controlled by electric switches that raise and lower the second and third row of seats.

The front seats are mounted quite high, and the seat base is just a fraction too short to be comfortable on longer journeys. It’s also quite bulky under the thighs, which does make the legs ache after a long trip.

It’s a surprising oversight for a long range tourer. Visibility from the driver’s seat is good looking forward, but is compromised over the shoulder, thanks to the combination of the large headrests in the second row and quite thick C-pillars in the small glass area.

The rear seats can be reclined in the upright plane, and interestingly there is virtually no transmission tunnel on the floor in the rear, which makes for a better time for the middle rear seat passenger.

Second row access is great thanks to large door apertures, although the step up is high. Access to the third row, meanwhile, works via a sliding rail for the second row, and there’s enough room back there even for a 185cm adult.

Going seven up results in absolutely zero luggage space, however. There are two flip up bins in the back row that hide a small bottle holder, a USB port and a little bit of storage space for occupants.

In the rear, the last two seats fold flat into the floor and are completely hidden away when not in use, and Land Rover’s unique tailgate seat is present. It’s a strange little perch that helps retain cargo in the space, but also raises the load height to an awkward level.

The result is that putting in prams and boxes and the like in the back can become awkward, even when it’s lowered, and we’d leave this option out if we were buying the new Discovery.

Up front, storage is well taken care of, with a pair of cup holders that can be slid back into a recess to reveal a very large and deep storage container underneath, which hides two USB ports, a SIM card holder, 12-volt port, and a HDMI cable socket.

A second 12-volt socket is located underneath the dash, along with a shallow receptacle to hold wallets and phones. There are cup holders in the centre rear armrest (second row) and there is a capacity to hold bottles in all four doors.

Our Disco was also equipped with the Active Key wristband, borrowed from the Jaguar F-Pace, which allows you to lock your key fob in the car and unlock it later by touching the waterproof wristband to the D in the Discovery tailgate badging.

It’s perfect for those that want to go for a surf and not lose their keys in the sand.

As an overall package, the Discovery is well built and we liked what we saw and drove. We were very impressed with its off-road capabilities, the technology that abounds within the vehicle, and the sheer amount of room inside.