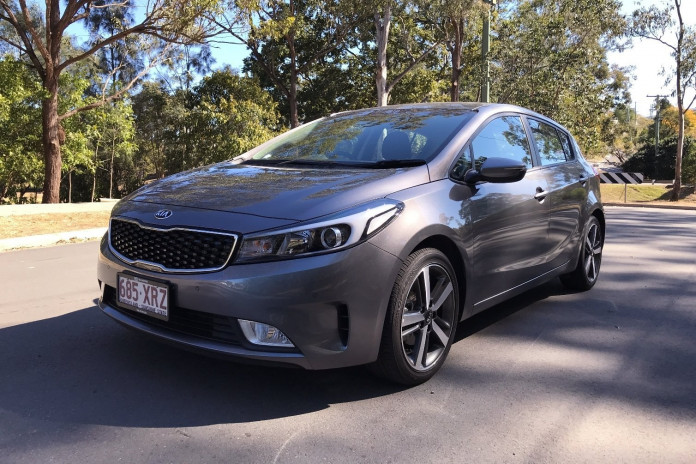 THE sub-$30k small car market is amongst the most competitive segments in Australia today, with a plethora of cars to choose from, including the ‘big 3’; the Toyota Corolla, Hyundai i30 and Mazda3.

Buyers are absolutely spoilt for choice, and in a world of tighter car parks and rising fuel costs, it is not surprising that this market segment is also one of the most popular in the country too.

With that in mind, where does it leave Kia’s soon to be updated 2018 Cerato hatch? For starters, this model has been on the Australian market for more than 5 years now, so it’s no spring chicken.

Moreover, with the class leaders in the Toyota Corolla, Hyundai i30 and Volkswagen Golf all having new models or significant updates released over the last 12 months, the Cerato certainly has a battle on its hands.

Before we move onto the car in question, the 2018 Kia Cerato Sport hatch, it is worth exploring how Kia has taken the Australian market by storm over the past few years.

Undoubtedly helped by a market leading 7-year unlimited kilometre warranty, Kia has certainly been one of the success stories of the Australian car market, with sales doubling from 2014 to an all-time record high in 2017.

With the release of the Stinger to critical acclaim in 2017 (with the QLD Police even taking delivery of them for patrol cars with the demise of the Commodore and Falcon), there can be no doubt that Kia is a brand that must be taken seriously in the domestic marketplace.

That’s great value when you consider it’s the second highest model in the range, sitting above the two S models and just under the top of the line Sport+. That potential gets even greater when you remember the 7-year warranty.

Standard equipment on the Cerato Sport hatch is good too, with features including Apple CarPlay and Android Auto, reverse camera, SatNav with live traffic, and 17-inch alloy wheels.

The infotainment system feels more iPhone 5 than iPhone X though, and our test car had an odd quirk, whereby phone calls would mysteriously not connect to the car at random, it was very strange.

The cabin can easily swallow four adults and some luggage, but does feel quite dull and lacks that fresh, feels really new look that the latest VW Golf and Toyota Corolla have, but the end of year arrival of the 2019 edition of the Cerato hatch should address that.

On the road, it’s pretty decent, if not spectacular, with a 2.0-litre 4-cylinder delivering 112kW of power and 192Nm of torque. That puts it down on direct competitors like the Toyota Corolla Ascent Sport (125kW/200Nm).

On the highway though, it is a relaxed and comfortable cruiser. Kia claims 7.2-litres/100km but we couldn’t even get close, only managing a 9.0-litres/100km. It’s by no means a bad car though, it’s just the other kids have new toys.

That, coupled with the fact it’s an ageing platform at five years old, isn’t doing it any favours, but that awesome warranty and the run out price make it a good proposition as a first or second car, particularly in the value for money stakes.

When the 2019 variant lands, expect it to shake up the small car establishment and push the benchmark envelope. In the meantime though, if you’re keen to grab a bargain run out model, the 2018 Kia Cerato Sport hatch might be a winner.

It comes in Clear White, Snow White Pearl, Silky Silver (our test car), Aurora Black, Metal Stream, Temptation Red, Gravity Blue and Planet Blue. All of these colours, with the exception of Clear White add an additional $520 to the sticker price.

Our 2018 Kia Cerato Sport (hatch) was provided by Kia Australia. To find out more, visit your local Kia dealer.