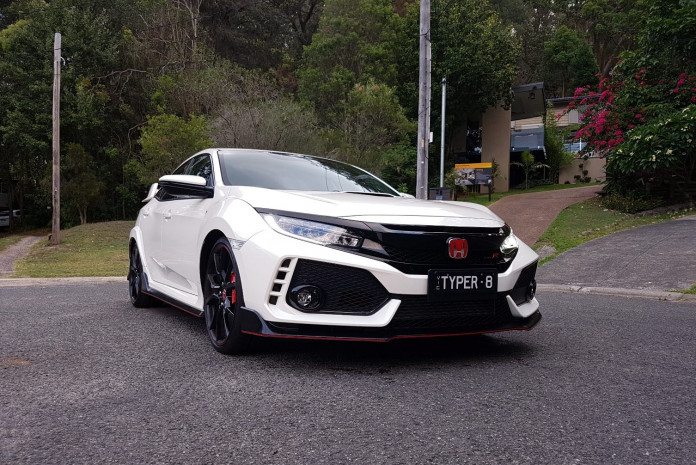 THERE are cars, and then there are iconic cars. We all have our own version of what those are too. Think 67 Shelby GT500KR Mustang or HQ Monaro for example. For tuners, those cars are more likely to be a WRX STi, an EVO Lancer, or the Honda Civic Type R.

It’s the last of these, the Type R, that in 2018 is making a massive return to the market, with an all new platform for an all new model, and the 2018 Honda Civic Type R definitely has an all new look to go with it.

The new Type R is radical in its looks. Seriously radical. Its track tested aero package is insane to look at and includes front and side splitters, a rear diffuser, vortex generators and a whopping double decker rear spoiler, peppered with chiselled angles.

It’s got more air intakes than an F-35 Joint Strike Fighter and punters will either genuinely love it, or hate it – it will polarise opinions, of that we have no doubt, but it might also save Honda from performance car never land because it’s a wicked drive.

For anyone who remembers the old Type R, you’ll remember just how revvy they used to be, and there’s still a hint of that when you fire up this new incarnation, but it’s also a very different driving experience – starting with the fact it’s no longer naturally aspirated.

The new R is powered by a 228kW 2.0-litre VTEC turbo engine that punches out an impressive 400Nm of torque via a 6-speed manual gearbox and a limited slip differential. There is no auto, it’s not even an option.

Honda’s reasoning behind that decision is that car enthusiasts drive manuals, because driving a performance car should be about making it work your way, and quite frankly we couldn’t agree more.

It has three drive modes, Comfort, Sport and the wicked +R mode, which at the touch of a button, automatically re-tunes the suspension, throttle and steering settings for maximum performance.

The ride is hard but not harsh, if that makes sense, thanks to the stiffened front wheel drive chassis, and adaptive dampers help ease the burden over rough surfaces, but it’s in the front end that the Honda genuinely excels itself.

The drive is incredible and that’s because of a well put together combination of factors. Thanks to track testing and the Nurburgring, the car just goes where you want it to go, and it feels ‘just right’ going there. The 20-inch black alloy wheels help too.

The seating position and feel from the race inspired sport seats are also bang on, and this only serves to add to the driving experience. Added extras like customisable digital metering displays add a little race car feel as well.

Sure it doesn’t sound as muscle bound as it probably should (it’s not quite got that Golf R/i30 N snap, crackle and pop), but it’s still super engaging to get behind the wheel and play, and when you play, you’ll get noticed. It’s definitely a head turner.

It’s competition in the hot hatch market is brutal though. It’s the same space occupied by the Ford Focus RS and the Volkswagen Golf R. But throw in the soon to arrive Hyundai i30 N Performance and the Renault Megane RS, and you have a virtual war zone.

And that’s before you even factor in an old rival, now in sedan guise, in the 2018 Subaru WRX STi spec.R. And this is where the Type R could struggle. It’s got the comfort factor sewn up for sure, but it’s rivals are quicker and the Ford and Subie have all wheel drive.

When it gets down to brass tacks though, the Honda appeals to a certain audience, and they won’t look twice at the plain Jane rivals for the most part. They’ll be more concerned about what it’s loaded with and how it performs.

On a fuel economy front, Honda claims a combined 8.8-litres/100km but we found anywhere between 9.4 and 12.5-litres/100km to be the norm. We did manage an 8.2 on one extra long highway drive between Sydney and Newcastle.

It’s full of tech too, with Android Auto and Apple CarPlay, Bluetooth, and DAB+ digital radio all pumped through a 7-inch touch screen infotainment system that comes complete with Honda’s annoying touch screen volume controls, which actually drove us mental.

There’s two USB ports and a HDMI port, as well as a pretty solid 160W 8-speaker sound system that pumps out the tunes with respectable clarity. There’s a truck load of safety features bundled into the Type R as well, along with a 5-star ANCAP safety rating.

Additionally it has the very cool road departure mitigation system, adaptive cruise control, a car alarm and immobiliser, and walk away door locking. There’s the obligatory traction control to keep you in line and vehicle stability assist as well.

It’s got two anchor points for baby seats and rear head and leg room is pretty reasonable if not great or fantastic. You wouldn’t want to be super tall in the back and you wouldn’t try to get three adults in there, but it’s okay for a small family if required.

It comes in Championship White (our test car), Brilliant Sporty Blue, Rally Red, Sonic Grey and Crystal Black. It comes with a 5-year unlimited kilometre warranty and hits the road at around $57,500.

Our test vehicle was provided by Honda Australia. To find out more about the 2018 Honda Civic Type R, contact your local Honda dealer.