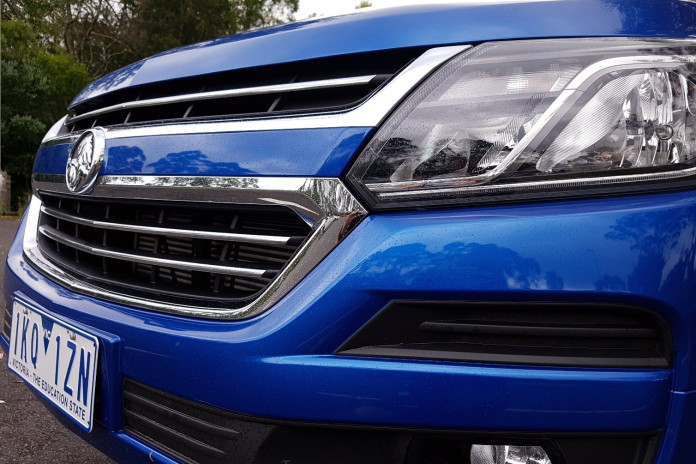 GETTING off-road, covering your SUV in mud and dust and dirt. That’s the 4×4 life. Australian’s love a bit of 4WD action, and so does Holden, with the new look 2018 Holden Trailblazer LTZ offering something for everyone.

The Trailblazer is a re-imagining if you will, of the vehicle formerly known as the Colorado 7, a name that dates back to when Holden had ties to Isuzu and the MU-X. While those days are gone, going bush and getting amongst nature is remains the goal.

Based on the Holden Colorado ute, the new Trailblazer is powered by a 2.8-litre Duramax diesel engine, pushing out 147kW of power and 500Nm torque, hooked to a 6-speed auto transmission and a limited slip differential.

It comes with 18-inch alloy wheels, including the spare, and rides on solid as a rock 265/60 Bridgestone Dueler H/T tyres. It also has a host of handling enhancements, including traction and descent control.

The LTZ is the middle of the range, with an LT model variant below it, and the top-of-the-line Z71 above it. It features integrated SatNav – the kind that needs your phone to work, leather appointed seats and key less entry.

Right that’s the features list done then. We are of course joking and the feature list is long, and includes an 8-inch full colour infotainment system with Android Auto and Apple CarPlay and very good Bluetooth Streaming capabilities.

It’s got a 7-speaker sound system, the much coveted cup holders (and plenty of them), electronic climate control, power outlets and power windows, and even comes with an alarm and engine immobiliser.

It’s also got heated front seats, which are electric for the driver but not the passenger, and the steering wheel is height adjustable, but again, lacks the forward and back adjustment you might expect in a mid-range SUV.

Additionally, in one of the coolest features going, you can start and stop the car remotely from the key. That means if you’re walking up to the car and it’s stinking hot, fire it up and let the air conditioning start the cooling process.

You simply stick the key in and turn it to the correct position when you get in, and away you go, driving off into the sunset, or down the beach, or up a giant rocky road, or through a river – all possible in the Trailblazer.

And we explored most of them, or at least a few, when we took the Holden off road, as you should when you’re testing a proper 4WD; our journey including a trip through Ourimbah State Forest, accompanying some significantly larger off-roaders.

Our road trip partners including a 2017 Toyota LandCruiser Sahara V8 and a 4.2-litre Nissan Patrol, both of which had been kitted out for serious dirt action. We let them go and do their own thing over large boulders and crevices.

But where it counted, up dirt and rocky inclines, across creek beds and through mud; pretty much anywhere that wasn’t ridiculously nutty to drive over – the Trailblazer more than held its own.

We were seriously impressed, as were the owners of the other two sets of wheels, with just how capable the LTZ Trailblazer was. At a smidge over $55,000 drive away, if you don’t want the swanky floor mats we had, it offers great value too.

The second and third row seats in the 7-seater fold completely flat, an added bonus that makes the 1,830-litre rear storage space very practical. That also translates to 878-litres with the third row down, and 235-litres with all seats up.

There’s very little leg room in that third row though, so it’s probably kid friendly at best in that space. We also found it quite noisy back there, with a fair bit of road noise through the rear wheels on both tarmac and dirt.

The 2018 Holden Trailblazer LTZ gets a 5-star ANCAP safety rating and has safety at the forefront of its design, with a host of airbags, forward collision and rear cross traffic alert, lane departure warning, and it has a 3-tonne towing capacity.

On the fuel economy front, Holden claims 8.6-litres/100km but we couldn’t get there. We did manage an 8.9-litres/100km but mostly hovered between 9.3 and 9.9 depending on where we drove it.

Our test vehicle was provided by Holden Australia. To find out more about the 2018 Holden Trailblazer LTZ, contact your local Holden dealer.