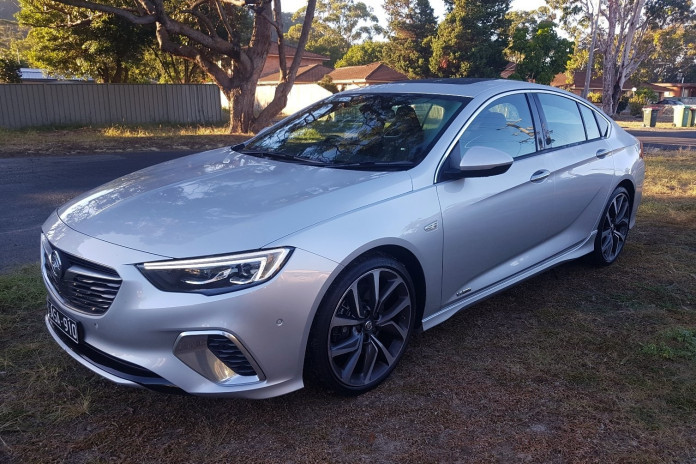 The 2018 Holden Commodore VXR is essentially a replacement for the SS, but not in the grumbling loud V8 sense of the word. What it is though, is a capable premium quality performance car, simply without the rumble.

It’s powered by a 3.6-litre V6 engine producing 235kW of power and 381Nm of torque, coupled to a 9-speed automatic transmission. That combination, along with torque-vectored power management make the Commodore VXR a solid performer.

It has the added bonus of an adaptive all-wheel-drive system that lets it stick to the road like glue, even when pushed hard. If it sounds like we’ve been genuinely impressed by the VXR driving experience, it’s because we have. It’s that good.

Like the rest of the Commodore sedan range, it’s a 5-door lift-back (with sports wagons and tourers also available), just like the Kia Stinger and the Ford Mondeo, and maybe that’s people’s “it’s not a Commodore” concern. But we’re not here to debate that.

It also gets hill start assist and selectable suspension controls. At the core of its safety package is an overly sensitive and somewhat annoying (no I’m not going to hit the roundabout and you don’t need to warn me) autonomous emergency braking system.

It’s one of the few downsides, along with a slightly tilted out of whack HUD that was slightly a little off putting, in a solid package that also includes a 360-degree camera, auto high beam, pedestrian detection and forward collision alerts.

Oh, and it runs on 91 octane fuel, so no need to shell out for uber expensive 98 RON fuel, which at the time of writing this story, was pushing $1.80/litre on the NSW Central Coast, and no less cheaper in Sydney.

Holden claims 9.3-litres/100km but the best we could manage was 10.2-litres/100km – still super impressive for a performance car.

It’s got the obligatory rear spoiler too, sitting on the boot lip. Inside, there’s a leather appointed interior (the perforated kind that always looks super cool), with heated and ventilated front seats, and heated rear seats.

The 8-way power adjustable front seats also feature a massage function for those long drives, and the side bolsters are adjustable too. There’s an easy to use SatNav and that infotainment system we talked about earlier also has DAB+ digital radio.

Wireless charging is on board too, along with Bluetooth, multiple USB ports and enhanced voice control. Add in the fact it has remote start (as in you can start it with a button on the key while not actually in the car), and it’s a pretty complete package.

Finally, for those obsessed with storage, and aren’t we all, there’s front cup holders, side storage bins in the front and back, and 490-litres of boot space, which grows to 1,450-litres when the split fold seats are laid flat.

If you choose the basic white or red option, it will set you back $60,895 drive away, while all of the other colours form part of Holden’s premium paint range, adding $550 to the purchase price, which becomes $61,475 drive away.

Our test vehicle was provided by Holden Australia. To find out more about the 2018 Holden Commodore VXR, and the rest of the Commodore range, contact your local Holden dealer.