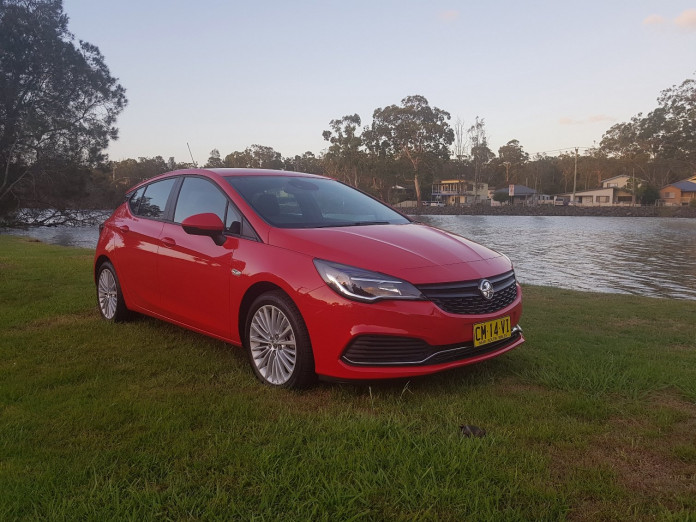 SOME might call it the second coming, and some might call it round two. Holden’s 2018 Astra hatch range does not represent the first iteration of the modernised version of the hatchback model, having been here once before with an Opel badge on it.

The 2017 version of the all new Astra hatch chugged along quite nicely, regularly breaking 1,000 units per month to end up with a five percent market share in the small car space, which it shares with some serious competition from Europe and Japan.

The range opens with the R, which you would kind of expect to be the performance variant but it’s not, odd we know, but hey, it’s a European Holden, who are we to argue. It then steps up to the R+, the RS, and the performance model RS-V.

The + in R+ means more safety in this case, but also more money. Safety is good, but do you get anything else for your money? Well, actually you do, including a 5-star ANCAP safety rating.

The R+ Astra hatch also gets a 7.0-inch touchscreen with Apple CarPlay and Android Auto, and DAB+ digital, as well as all the usual Bluetooth functionality. For what is a lower grade model, it’s got a very good list of standard equipment.

The cabin is solid rather than spectacular by class standards. On the down side, there’s too much dust prone glossy black trim along the dash and hard, scratchy plastic along the transmission tunnel.

The lack of button start (the ignition barrel is also a bit flimsy) feels old hat too. It doesn’t feel nearly as upmarket as say a base VW Golf. But on the plus side, the design is clean and simple, and that’s a bonus.

There are also four one touch power windows. The cloth trim is hardy but comfortable and we were grateful for its relative coolness versus what you might expect from the faux leather you’re more likely to get at this level.

Only the front scores cup holders, with the rear passengers making do with door pockets that might swallow a small bottle. There isn’t an armrest or air vents back there either.

Under the Astra R+ bonnet is a Euro 6, 1.4 litre turbocharged engine making 110kW and a muscular 240Nm of torque (that’s only 10Nm less than the 2.5 litre non turbo Mazda3 engine).

It’s smooth and refined, and typical of this power train type, has an ample mid range/rolling response. That makes it feel simultaneously more relaxed and muscular than the naturally aspirated engines in the Corolla, i30 and Mazda3.

Holden claims combined cycle fuel economy of 5.8-litres/100km, though our testing returned 7.8-litres/100km. Unlike many rival Euro cars, the Astra also runs on 91 RON fuel. The tank is 48-litres.

The engine is matched to a six speed automatic transmission, an increasingly rare commodity in this age of DSG and CVT. It’s not particularly rapid at shifting between ratios, but it’s smooth and generally intuitive.

While this engine is good, we note that for only $4,000 more you can get the Astra RS which puts out 147kW of power from a 1.6-litre turbo. That’s borderline hot hatch territory.

Like other Holdens, the Astra hatch has its own Australia specific suspension and electric assisted steering set up calibrated by the engineers at its Lang Lang proving ground in Victoria.

The car has the typical Holden road feel. It’s soft enough to iron out or lope over bad surfaces, but the body control against cornering loads is also excellent, as is the turn in and overall feeling of agility.

The Astra’s biggest problem is probably, ironically, the Holden badge. Despite the company’s best efforts, buyers are wary of the company’s longevity and some of the other cheap feel cars in Holden’s arsenal do the Astra no favours.

Our test vehicle was supplied by Holden Australia. To find out more about the 2018 Holden Astra R+ hatch, contact your local Holden dealer.