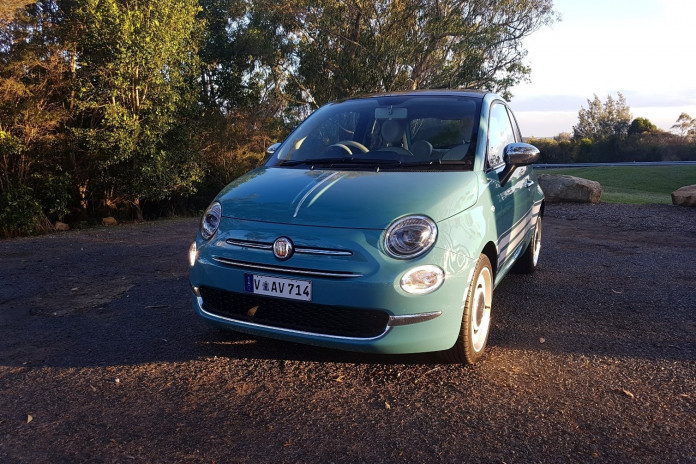 GETTING our hands on the only 2018 Fiat 500 Anniversario with white GT racing stripes down the side had cool written all over it. It was used to launch the new model in Australia, so had some special bonus styling to go with its unusual green colour.

Not that it needed it, the Fiat 500 Anniversario looks super cool on the outside, and retro funky on the inside, and is powered by a 51kW 1.2-litre 4-cylinder petrol engine that pushes out 102Nm of torque.

That engine is hooked into a single clutch automated manual (Fiat’s version of a 5-speed auto with manual functionality), that is hard to describe as anything other than awful. In automatic mode, it’s jerky, it’s slow and it’s impossible to judge sometimes.

In manual shift mode, it clutches out (drops the revs) automatically as you shift up and down, and the first time it did it, we thought we’d head butt the steering wheel.

A 5-speed manual gearbox is available, and the dualogic auto transmission is a $1,500 option. So, if you can still find a manual version of this groovy little light small car, then we’d recommend not taking the auto option and grabbing a real manual.

That said, we couldn’t manage better than 5.6-litres/100km – which is still astoundingly good fuel economy. It’s reasonably family friendly, despite a tiny boot space (185-litres), with good space for a car seat for a toddler in the back.

Rear head room is not great, and nor is rear leg room for a full sized adult though, and should you need extra boot space, the split fold rear seats don’t fold all the way down either, and leave a decent lip to negotiate.

From a safety and technology perspective, there’s plenty on board the Fiat 500, despite its seriously retro look, including seven airbags, daytime LED running lights, period inspired 16-inch alloys, and a Uconnect 5-inch touchscreen radio with USB and AUX.

There’s also a lot of chrome accenting, pretty much everywhere, and a very nice striped cream leather and cloth interior that features embroidered 500 logos in the head rests. You also get a colour matched dash insert, mirroring the exterior colour choice.

It’s got a digital dash as well, and a numbered Anniversario plaque, as well as a full glass roof. Some 51 auto versions and nine manual variants make up the 60 cars made available in this special edition.

It does miss out on autonomous emergency braking and no reversing camera either, both of which can be found on micro car rival, the Kia Picanto, but you can adjust the lightness of the steering for extra manoeuvrability.

The 60th anniversary edition of the Fiat 500 comes in just two colours, Tea Leaf Green (as tested), and Orange. The manual variant hits the road at $23,444 drive away, while the dualogic automatic is $24,989, again, drive away.

Our test vehicle was provided by Fiat Chrysler Australia. To find out more about the 2018 Fiat 500 Anniversario, contact your local Fiat dealer.