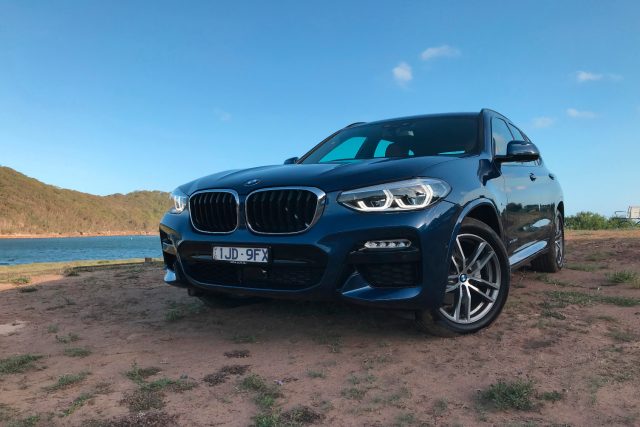 We say this because the new X3 is well, wow, from start to finish. Actually, it took a few hours of figuring out all the bits and pieces first because there are literally that many bells and whistles.

In fact, we’re surprised you don’t have to do a short course with an assessment to be qualified to operate this car. In saying all that, once you’ve figured it all out and you get this fine automobile onto the road, it is a dream to drive and be in.

The interiors is just sexy, lots of tanned leather, soft matte black surfaces, finished with soft silver and piano black trim, or at least that was our version, but if you don’t like the sound of ours, you’re seriously spoilt for choice.

There’s like a million options when it comes to look and feel for the X3, from leather and cloth interiors, or a combination of both, to a sweet range of colour options and lots of other little options to pimp your BMW ride.

Our test vehicle was bundled with the M sport package which adds lots of nice little touches like an M steering wheel, M sports seats, door trim finishes, M velour floor mats and a bunch of other sexy stuff that give the X3 that additional refinement.

The same can be said about the front grille; it’s cavernous, and sitting right behind it are the visible front cross members, which we think looks really cool but may be a little off putting for some.

The body shape and details are well thought out across the entire vehicle, particularly with the M sport package. We have to admit we didn’t think there was much difference between it and the xLINE and luxury line packages on first look though.

But make a closer inspection, and you notice that there is actually a mass of little body tweaks that make it look more complete and sleek, and we like that subtlety, a lot. Oh, that M sport package also brings an M transmission too.

That change gives you a little more response from the engine and smoother power delivery from the BMW TwinPower turbo 4-cylinder diesel engine, which will rocket you from 0-100km/h in 8 seconds, with its 130kW of power and 400Nm of torque.

For those not aware, TwinPower does not mean twin turbo, it means the turbo is twin scroll, and while we don’t want to bore you with a long explanation, in a nutshell, it helps get rid of turbo lag.

The M sport package on the X3 xDrive20d also includes M sport brakes and M sport suspension, but if that’s not enough for you, there’s a 195kW xDrive30d that packs a ridiculous 620Nm and a 0-100km/h time of 5.8 seconds.

But we’re not done there, and neither is BMW, because there’s also a petrol powered X3 M40i, an almost God like offering, with 265kW of power and 500Nm of torque, and a 4.8 second 0-100km/h benchmark. Pretty damn quick for a smallish SUV.

Don’t worry about getting traction either because these suckers are all wheel drive, and to loose traction, well we don’t think you can. We tried. We tried really hard but the system is just too good and keeps all four wheels powering to the edge without loosing grip.

That said, you don’t have to drive it hard, it has Eco Pro mode, so you can dial all that grunt down and keep your shiny BMW super efficient, with a fuel economy rating of just 7.2-litres/100km, even in Comfort mode.

Sport mode is not so economical but like Comfort mode and Eco Pro mode, it comes with its own cool version of instruments on the multi-function display, which is a very cool feature that we like very much.

To help you keep control of the power delivered by the advanced engineering of the German car maker, there is a serious arsenal of driving aids, including this thing called BMW Personal CoPilot.

In a one of those nutshell things we mentioned earlier, it means the car knows how to drive better than you do. The system is a combination of radar, sonar and cameras that see and hear everything.

It’s like a freaking submarine on wheels, constantly sensing the environment around you and reacting if need be, and we saw it do its thing, first hand.

During our drive from Sydney to the Central Coast on the deadly M1, we were overtaking in the right lane, when a truck in the left lane swerved a little, with the driver of the hatchback in the middle lane following suit.

We didn’t worry because there was plenty of room, but the car did and gently corrected our driving line to move away from the hatchback.

We noticed this because we have years of driving experience, but seriously, a humming bird couldn’t catch this thing in action, it was so gentle with its assist that it was almost unnoticeable.

The CoPilot system helps to keep you safe from nasty potential incidents on the outside of your vehicle, but it doesn’t stop there, if you start to nod off, the car will give you a wake up call by tightening the seat belt.

In addition, the X3 comes with driving assistance plus, the ultra cool cruise control system that keep the car in its lane, change lanes if it needs to, assist with junctions, and follow the car in front while keeping a safe distance, all the way up to 210km/h.

The system is off the hook. If you do stuff up and have an accident, this car will even close all the windows and sliding roof, return the seat backs to the upright position and keep the brakes on until you come to a stand still.

And it has connectivity to everything. Seriously, everything. Short of being in direct contact with NASA, the 2018 BMW X3 has its finger on the pulse. It knows the weather, it’s connected to live Sydney traffic, and can even connect to the calendar on your phone and let you know when it’s best to leave to make your appointment.

You can even share this information with friends and family. They can log into a website which will tell them your estimated arrival time and the exact location of your vehicle, and it can also act as a Wi-Fi hot spot.

There’s a big touch screen in the centre of the dash too, which we reckon should fold away but doesn’t, but a tiny thing really. Oh, and if you have short stumpy arms you don’t have to reach for the touch screen as there’s a dial controller and a touch pad.

If all of that seems too hard, you can always just gesture at it to do stuff, and no that’s not a joke, it actually recognises hand gestures like circular motions with the index finger for changing the volume. Stop it, we know you’re doing it now.

Phew, now you have set everything up and figured out all the gizmos, and advised a cast of thousand of your plans, you just have to enjoy the ride in your electric adjustable seats, complete with toasty bum heaters.

There’s ambient lighting that changes colour depending on what drive mode you’re in, or you can set yourself, as well as your choice of eight fragrance cartridges to scent the air in your X3 and keep you feeling great.

Okay so the lighting is right and you have a good stink coming through the vents, now set up your favourite tunes via Apple CarPlay or Android Auto, and arouse your ears with the stunning 600w Harman/Kardon surround sound system.

Battery running low on your phone? Well just sit it on the wireless charging pad, and away it will go, but if your phone isn’t compatible, BMW ha a range of special charging cases for your older mobile device.

Automatic climate control will keep you comfy too, but you have to set it much lower than other car brands. We guess it’s because it doesn’t get mad hot in Europe that BMW have not worried about this too much.

Don’t get us wrong it gets cold and has good air capacity, you just have to set it lower than you would in a car designed for Australia conditions.

To obtain this piece of motoring engineering with serious heritage, reliability and pure driving pleasure, it will set you back $80,640 on the road, with the M sport package adding another $4,550.

As we said earlier, there’s a gazillion choices to make around interior trim, upholstery, accessories and add-ons, but on the outside, there are simply colour selections, and there aren’t actually millions of them.

Our test vehicle was provided by BMW Australia. To find out more about the 2018 BMW X3 xDrive20d, contact your local BMW dealer.

Triumph Speed Triple 1200 RR designed to get the heart racing