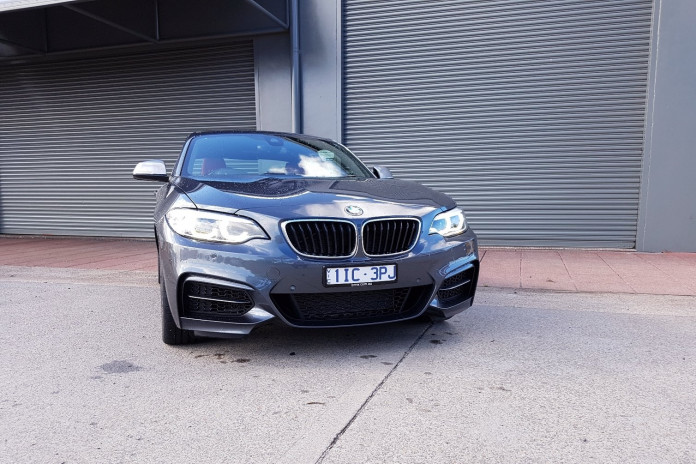 SOME performance cars sit at the beginning of the model range, while some sit at the top, offering an all-conquering variant that takes your breath away. Some, like the 2018 BMW M240i, offer true performance, but with a hint of every day accessibility.

Clearly, the M2 is by far and away the kingpin in the 2 series range from BMW and an outstanding offering from BMW M, but ignore the M240i at your peril because its eager to please and instantly enjoyable.

Let’s face it, people who buy performance cars do so because first and foremost, they’re serious fun, but there’s a distinct thought process that goes into their purchasing decision. They’re mind works a little differently.

For example, the average shopper will wonder if the optional panoramic sunroof is worth the money, while the performance car enthusiast has already mentally removed it, because the heavy glass roof just adds needless weight.

That enthusiast just wants the most performance that he or she can afford and is usually willing to make sacrifices in other areas to get it. Enter the powerful, rear wheel drive 2018 BMW M240i, part of the 2 Series range.

BMW has seized the opportunity to offer a purer vision of a downsized two door and a proper BMW to boot, with a longways engine, driven rear wheels and the unmistakable separation of roof and boot line that makes a coupé a coupé.

It’s a commitment that has produced a distinctive range of desirable cars. Using this blueprint BMW also whipped the roof off and replaced it with fabric in the shape of a convertible and to their credit have included the M240i.

The car’s styling is distinguished from the 1 series, with which it shares some panels, by different headlights and bumpers. You can also separate an M240i from its siblings, by its large front air dams and the absence of front fog lights.

The grey door mirrors, and new LED lights at the front and rear give it a distinct look as well, along with tweaks to the air intake and famous BMW kidney grille. The M240i also rides 10mm lower than the standard 2 Series.

Power comes from BMWs twin scroll turbocharged 3.0-litre straight six, in a more developed state of tune than say the 135i. BMW has definitely turned up the wick, and the M240i produces 250kW and 500Nm, with the peak twist figure almost matching the M2.

The motor is mated to an eight speed automatic transmission that’s smoother and easier to live with than the seven speed dual clutch unit found in the more focused (and expensive) M2 Coupe, though it isn’t quite as sharp when pressing on the power.

Out on the tarmac, the rear drive layout of the M240i and lack of a LSD can send the tail end wayward as it struggles for traction if you get too greedy with the throttle, but keep it smooth and you’ll be rewarded with balance and a great driving experience.

Inside the ergonomics have been altered to be more driver-focused too. There are touches of chrome, new air vents and the latest iteration of BMW’s iDrive infotainment system – including a touchscreen display and optional wireless Apple CarPlay.

Comfortable sports seats and a chubby steering wheel also provide the key elements of an excellent driving position, with plenty of adjustment. There’s leather everywhere too, giving the interior an overall smart look and feel.

The compact 2 Series body makes tight rear seats ideal for temporary rides as opposed to long drives but on the plus side, extra front row headroom and second row legroom have been added to suit larger drivers.

Our only criticisms of the solid interior are the slightly offset pedal layout and a driver’s seat that sits higher than feels ideal, and rear head room. Access to the back seats is difficult and you don’t want to be tall sitting back there.

Red instrument graphics and an ‘M240i’ logo in the binnacle, meanwhile, put some exciting visual elements on show, and form part of an excellent list of specs that includes SatNav, BMW ConnectedDrive, DAB radio and USB and Bluetooth connectivity.

There is a host of other convenience items such as automatic wipers and lights, rear parking sensors, and dual zone climate control, as well as buckets of safety technology to well, keep you safe.

Overall the M240i is a fantastic car. It has its faults, but it offers an exhilarating drive from the moment you turn the key. It’s somewhat pricey, at $75,000 plus on-roads, but price is relative right, you could spend nearly $100,000 on an M2.

And therein lies the problem with performance cars. At some point, you really can’t spend more. Most of us have to square our fantasies with financial reality. You must weigh into the affordability versus performance conundrum.

If you can afford not to think about the aforementioned realities of life, and you want a small car that will tick the pure performance boxes, buy an M2. If you’re like the rest of us, then it’s hard to go past the M240i for up there performance at a good price.

Our test car was supplied by BMW Australia. To find out more about the 2018 BMW M240i, contact your local BMW dealer.