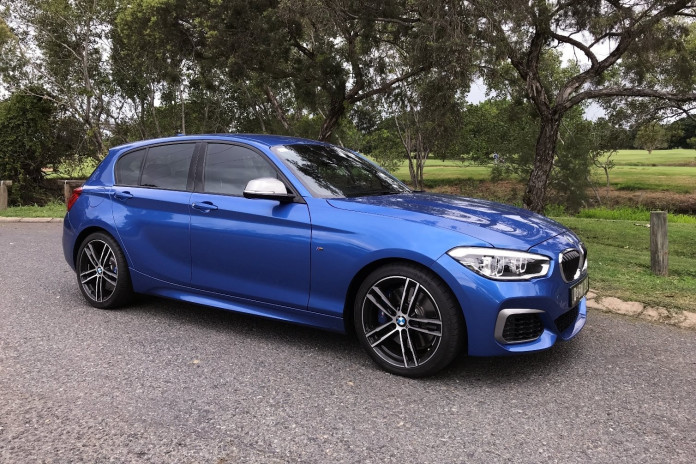 IT’S that old adage right, German engineering is the essence of the drivers’ car. It lives in BMW and Audi and Mercedes-Benz, and they all have a reputation for building cars that we love to drive.

For one of those three brands, slogans like ‘sheer driving pleasure’ and ‘the ultimate driving machine’ ring true, with the combination of rear wheel drive and 50/50 weight distribution making it the preferred choice over its rivals.

Which brings us to one of the best value propositions in their range, the 2018 BMW M140i (LCI-2), representing what could be the perfect combination of a genuine performance vehicle and a sensational price – $59,990 plus on-roads to be exact.

In its second mid-life update since 2015 (that’s the LCI-2 bit), the M140i has, for a long time, been an apple amongst oranges as the only rear wheel drive, 6-cylinder hot hatch available on the market.

Gone are the days where everything was an optional extra and you had to cough up for everything. The only things you need to shell out for are metallic paint, an electric sunroof, and heated seats, oh, and Apple CarPlay if you so desire it.

So what lies beneath the hood, we hear you ask. Enzo Ferrari famously said that when you buy one of his cars, you pay for the engine and get the rest for free. Adopting these famous words for the M140i sells it short, but it does pack a punch.

It’s powered by a 250kW 3.0-litre twin-scroll turbo in-line 6-cylinder engine producing 500Nm of torque, and mated to a traditional ZF 8-speed auto (a 6 speed manual is also available as a no cost option).

That lines it up with direct competitors like Mercedes-AMG A45 and Audi S3/RS3. What’s astounding about the BMW is the fact that it accelerates faster than the now slightly outdated E92 M3 and runs a close 0.3 second behind the current M2.

To put that into some perspective, the M2 is around $40,000 dearer than the M140i and we wonder whether BMW might have held back on the M140i so it didn’t out perform its dearer M car sibling.

Rumours abound too that the very same engine that is in the 2018 BMW M140i, the B58, will power the new Toyota Supra road car when it is launched. That car is expected to share its platform with the 2019 BMW Z4 roadster when it arrives.

But how does it perform in the real world? In Comfort mode around town, the motor is silky smooth and refined,and almost feels like you’re driving a luxury saloon like a BMW 7 series or Mercedes Benz S Class. It feels big, even though it’s not.

Flick it to Sports mode and it comes alive. Our test vehicle had the M Performance exhaust fitted, so it came loaded up with extra crackles and burbles on top of the already cool exhaust note, giving the M140i acoustics to match its more illustrious M2 cousin.

There is a down side to sports mode and the beefed up exhaust system though, and that’s an incerease in fuel consumption, and a decent one at that. We averaged about 12.0-litres/100km, most of which was town driving.

On the highway, this dropped to a more respectable 9.3-litres/100km. We couldn’t even get close to BMW’s claimed 7.something/100km. But then again, who would buy a performance car and worry about the fuel consumption?

That’s a legitimate question, you don’t really buy these things for the economy.

The overall handling of the M140i offered perfect balance and predictable handling, and while pushing it to its limits doesn’t give you the same feedback or feel as a proper M car, the price point means we can forgive BMW that one.

The absence of an LSD is also a handicap when driving the M140i at more than 8/10ths, but this oversight can be corrected should you desire to do so, as a genuine LSD is available from BMW M Performance, albeit at around $5,000 plus installation.

On the inside, the M140i’s interior has copped its fair share of criticism for being a little bland and dated, especially when compared to what Audi is offering with their latest virtual cockpit.

While the interior may not look as fresh as say, an Audi S3, we are a big fan of its simplicity and functionality, making it feel less like an arcade game and more like a race car, especially with the new digital dash delivered in the latest update.

White dial visuals are a feature of the new look, that definitely provides a more modern feel. Seating too is pretty good overall, although the back seats will be tight for those tall people amongst us, but it does accommodate anyone under 174cm perfectly.

The boot is quite spacious as well (considering it’s a rear wheel drive) and can easily accommodate the weekly groceries or a couple of large suitcases for that short trip away. It’s quite a reasonable car to run too, costs wise.

However, as with all new BMW models, the M140i falls under the condition based servicing regime. In essence, how you drive the car dictates how often the fluids are changed, and some servicing components are completed.

The car’s computer monitors your driving behaviour and notifies you when it needs to be done. This could be as long as two years or 30,000km, which in our opinion, is far too long. If you plan on keeping the car long term, insist on more oil changes.

There is one final elephant in the room for the M140i though, and that’s its overall styling. It won’t win any beauty pageants that’s for sure, but it’s come a long way in the looks department and the right colour can make all the difference.

Lighter hues like Estoril Blue and Alpine White suit the M140i best in our view, although it does come in other colours, including Black Sapphire, Melbourne Red, Mineral Grey and Sunset Orange.

Overall, the 2018 BMW M140i offers driving performance we’d relate all the way back to the original WRX STi of the 90s, bundled into a more refined package that offers a great all rounder option – a hot hatch that’s still an entry level prestige car.

When Munich finally retires the current F20 1 Series platform within in the next 12–18 months it could well be a sad day, with the likely replacement expected to be front wheel or all wheel drive.

Our 2018 BMW M140i is owned by journalist Bernard Wong (the author of this story). If you’d like to know more, contact your local BMW dealer.