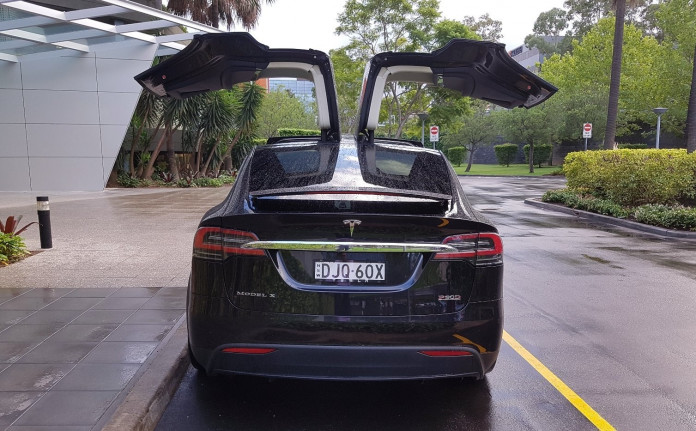 FOR anyone who is a fan of older classic cars, the mention of something as simple and yet divinely sexy as gull wing doors elicits fond memories of the 1954 Mercedes Benz 300SL – one of the most recognised cars ever built and a truly legendary motor vehicle.

Fast forward about 63 years and the gull wing doors are back, known as falcon doors this time, on a vehicle that could just gain itself a similar legendary status as that Mercedes Benz classic, given its sheer uniqueness in today’s automotive market.

That vehicle is the 2017 Tesla Model X P90D – fitted with Ludicrous (which has been upgraded to the P100D in just the last few days – post our test). Now we mentioned Tesla so you know it’s all electric. But if you haven’t heard of the Model X, or you’ve been hiding under a rock – it’s an SUV capable of an astounding zero to 100 speed of 3.1 seconds – we kid you not.

Did we mention that officially that incredible zero to 100 speed is around 4 seconds? No of course we didn’t. Well that’s because Tesla has a secret. A very exciting secret. It’s called an Easter Egg, and the Model X has a couple of them – a Christmas holiday light show, and changing the navigation system to pretend you are driving on the surface of Mars being the most kooky.

But it’s the ‘other’ Easter Egg that’s coolest of all. Hold down the Ludicrous mode button, wait for the galactic star show on the display screen (think Star Wars Millennium Falcon hyper drive) and punch the accelerator to the floor. The G-forces in the boosted Ludicrous Speed mode will take your breath away as the Model X presses you into your seat on its way to the 3.1 second benchmark.

It comes in three different seating configurations, including a basic five seat option, six seats (as tested) and finally a seven seat option, although the last row is strictly kid friendly only thanks to the sloping roof line. It’s got a battery range of 470km on a standard full charge, providing you stick to the speed limits, misbehave and that will dwindle rapidly.

The Model X P90D is fitted with dual electric motors providing a 193kW front motor output and a 375kW rear motor output – add those together and that figure is an astounding amount of power. It’s All Wheel Drive and is coupled with a single speed automatic transmission. Our test vehicle also came with the stunning optional Onyx Black 22-inch wheels riding on 285 rubber at the rear and 265 rubber at the front.

Under speed, it handles like a dream (and we stress the under speed bit). The Model X offers that perfect combination of SUV bulk with sports car performance, ride and handling. The battery packs make for an amazing centre of gravity, while the fact it’s built on the Model S platform means it wants to behave like a race car.

Step inside the Model X and the first thing you notice is the mammoth 17-inch touch screen (which we’ve talked about before a number of times in our various reviews of the Model S 75D, P85D and P90D), which has undergone a number of upgrades to bring it to software generation 8 – which gives it improvements across the available technologies within the car.

The improvements to the touch screen software make the new look system one of the easiest to use in existence, and there is so much screen its not funny. Not only that, the car has its own SIM card so is connected to the Internet, streaming music via built in music apps (including Spotify) and providing permanent connectivity to Google Maps.

At the hub of the system is also the ability to configure all of the cars’ vehicle settings, including the ride height of the air suspension, charging ratios, cabin temperatures, performance settings (including Ludicrous and Ludicrous Speed mode). You can even remotely open and close all of the doors, and adjust seating positions throughout the car.

It would be remiss of us to not mention Elon Musk’s quirky bio-weapon defence mode – which our test vehicle was fitted with as part of the Premium Upgrades Package (that also gave us self opening doors on approach). Bio-weapon defence mode pressurises the cabin with air pulled completely through a HEPA air filtration system and two carbon filters, providing maximum protection against hazardous external conditions.

Other upgrades that either came with the P90D package or were fitted to our test vehicle included ultra high-fidelity sound (a sound system with 17 speakers), Tesla red brake calipers and an active rear spoiler. Not fitted but providing an incredible upgrade is the Enhanced Autopilot driving aid, which provides four cameras (instead of one), and 12 ultrasonic radar sensors for the most complete safety system we’ve ever seen on a vehicle.

It will let you match speed to traffic conditions, keep within a lane (yes it will do this for you), automatically change lanes without driver input, exit a freeway at your designated exit automatically, self park (yes you really can send it to find a spot and park in it), and allows you to summon your car from your garage.

Of course there are things we didn’t like about the 2017 Tesla Model X, and it’s weight is one of them. Take your foot off the accelerator and even at low speed, the heavyweight SUV (at 2449kg) wants to nose dive like a crashing plane. We get it uses vehicle deceleration to slow charge the battery but even in light charge mode, this was ridiculous.

Like many things Elon Musk does with the Tesla models, it is odd in a number of ways and the giant panoramic windshield is another of those, with the sun visors half way up the huge piece of glass. Drive into the setting sun and this fact, even with the visors pulled across, will annoy you no end. Think inescapable glaring sunlight in summer.

Likewise, after a while the falcon doors are going to become the naff factor on your car. But it gets worse. Want roof racks to put your $14,000 push bike on, or your skis or a groovy looking luggage box – oh wait, you can’t – because you’ve got those falcon doors – and need a tow kit. Both boots aren’t that big either if you go for the six seat option (as it’s three rows of seats).

Now for something completely scary. Push those add-ons to include Enhanced Auto-Pilot (possibly the most awesome driver aid ever made), improved audio and charging, a towing system, and the capability to go to fully autonomous driving in the future, and your cheque book better be okay if you write $330,000 in the amount box.

The price is a massive sting and its biggest down. We think it’s virtually impossible to justify the spend if you look at it on a value for money proposition. But if you can afford a Model X at the pointy end of the options, and you want the most eco-friendly, technically advanced and quickest SUV in existence – do you really care about value for money.

Our test vehicle was provided by Tesla Motors (Australia). If you’d like to know more about the 2017 Tesla Model X P90D, contact your local Tesla dealer.