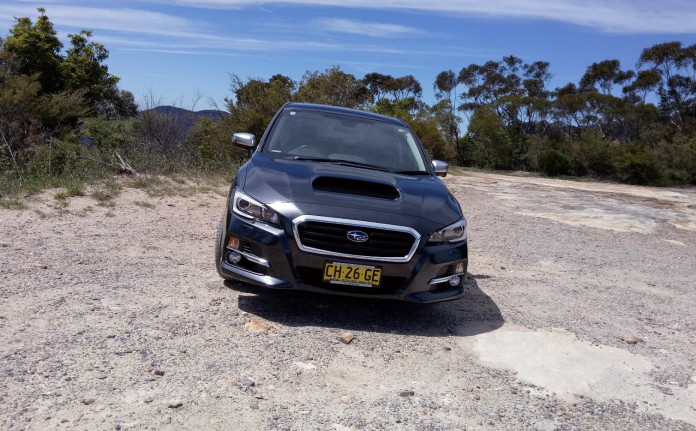 TO say we were surprised at the level of driver goodies on offer in both vehicles (we tested the GT and GTS back to back) would be an understatement.

First impressions: “Gee it looks great. Why isn’t this a WRX?”

After driving them, we can say it’s not a WRX, but it’s not really supposed to be (except maybe the funky looking spec.B).

The main visual difference between the GT and the GTS is the body kit and the slightly more aggressive alloys (we’ll talk about the interior later). The technology and the engine are the same and both drive beautifully.

The adaptive cruise control alone is worth the price of admission. The car automatically slows down with the traffic in front, leaves room for emergency action if required, and will almost drive itself. All you have to do is steer.

A small tap on the accelerator will get it going again to speed, again leaving plenty of room in front in case the lead car stops quickly. This is all thanks to Subaru’s excellent third-generation Eye-Sight stereo camera detection system.

All this technology makes driving in traffic less stressful BUT it can lead to laziness and certainly doesn’t mean that you can spend more time on Facebook. Used smartly this advanced technology will save you from speeding fines and rear ending the car in front, all while reducing your road rage.

The only criticism of the system is it is a little late on the brakes which was slightly disturbing. At slow speeds (under 30km/h) it was fine but at higher speeds we tended to do the braking rather than rely on the electronics. A little late for our liking.

The GT-S is the stand out of the two models tested here, and has the 7-inch touchscreen which was great. Easy to operate as long as you are prepared to be fearless with touch screen technology. It has SatNav, Siri capability and Pandora capability.

If you are a bit of a technophobe, then perhaps the manual would be a great help. It’s easy to pair a phone to and sound was very clear either with music or phone calls.

The GT infotainment system is the smaller 6.2inch screen, and the car comes with two USB ports, but no SatNav. There are less speakers too, but the sound is still quite good and the Bluetooth system is also clear and echo free.

Staying with GT, there are cloth seats that are very comfortable, if not anything flash.

But its stablemate, the GT-S – well bring on the leather – seats, steering wheel, gear knob and dash. It makes for a very nice place to be and all comes standard. The only improvement we would make is seat cooling as well as heating and better lower back support.

All in all though it’s quite comfortable. Driver’s seat is all electric as well, making it easy to be comfortable with everything close at hand and in reach. The trim looks well finished and expensive.

The rear seats have great head room, something some manufacturers forget about, but the middle seat belt coming from the roof in the boot space was a little off putting and lowered the score overall for the interior, as did uncomfortable foot well space.

There is plenty of storage space in the back, with room enough to take the kids bikes or prams with ease. The rear seats are almost flat when laid down, giving you plenty of length for a longer load, but a lack of real height in the boot space (thanks to the tapered roof line) makes it difficult for a taller load. It does however hold an impressive 486 litres in the rear.

Overall, the GTS certainly looks the goods. It sits well on the road and the bonnet scoop (although quite large) hints at power and speed – the kids will love it. They’ll also love the 2-litre turbo charged boxer engine, coupled to an 8-speed auto gearbox that offers a smooth and responsive power deliver, across three different engine settings.

At a basic level, ‘i’ mode is the bottom of the performance food chain, and it’s a little flat, while the mid-range Si setting gives you enough pep to go, but still maintain a level of control. S# is where it’s at though, you can put your foot down and you’re doing 80km/h before you know it – on your way to a zero-100km/h in 6.6 seconds.

Steering is a little lacking from a feedback perspective and on the long and winding Hawkesbury Road between Richmond and Springwood, we found a bit of the fun factor missing as a result. The ride quality is good though, not great, but good. The GT-S is stiffer overall than the GT, and the Bilstein suspension makes for a much improved cornering experience over a standard wagon.

Mechanically it’s also very quiet, hardly noticeable in fact. The same can’t be said for the road noise, the tyre choice here lets the Levorg down, especially on the open road, where you can hear plenty of tyre on tarmac.

If you’re after an all-wheel drive wagon that will satisfy all of your family requirements and fit in with a sporty outdoor lifestyle, then either version of the Levorg will certainly not disappoint. While the size of the wagon won’t be too popular with lovers of larger vehicles both the GT and GT-S definitely have the grunt to satisfy anyone who likes a little more excitement in their daily driver than your average wagon. And if you want fast car looks in your Levorg, take a look at the spec.B.

Our test vehicle was provided by Subaru Australia. To find out more about the 2017 Subaru Lervorg GT or GT-S, visit your local Subaru dealer.