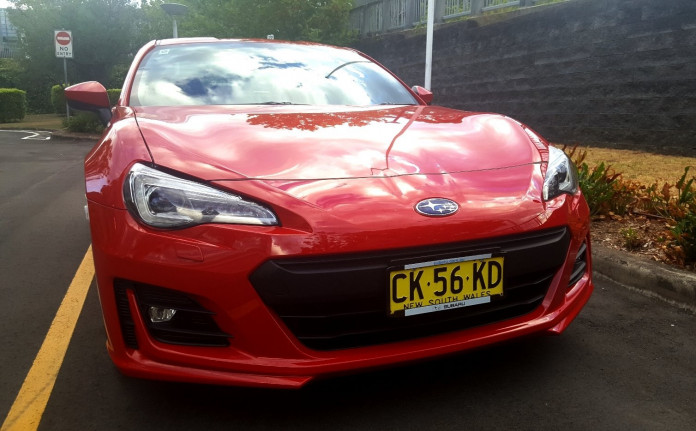 BACK in the 70s, Australian’s had a love affair with the panel van. They were literally everywhere.

Fast forward a decade and look inside the heart of 1980s and 1990s drivers, and the panel van had fallen by the wayside, replaced by a passion for coupes (Toyota Supra anyone). They were part of an iconic dream. Sleek looks, enough power to rip your face off, enough room in the boot for a set of golf clubs or just one bag, and no room for the kids.

But for a long time, affordable and coupe stopped being friends. Options for a cool two-door coupe were limited.

Enter the Subaru/Toyota collaboration that created not one, but two, icons – the Toyota 86 and the Subaru BRZ. The budget conscious sports coupes. We’ve been driving the 2017 version of the dream fulfilling Subaru BRZ (which looks absolutely rocking in Pure Red) and there’s a lot to like.

Priced from $32,990, it’s exciting and engaging. Oh, and don’t let the boy-racer vibe deter you, the BRZ is perfect for purists on a budget. The 2.0-litre flat four pairs to an improved six-speed manual, which, while good, doesn’t answer complaints that the rear-drive sports car lacks punch. (it needs a 2.5-litre engine – an STi version if you like – that would make the BRZ a must have sports coupe).

It’s easy to write off the 2017 Subaru BRZ as being only slightly improved, but don’t do it just yet. Engine upgrades have boosted output to 152kW and 212Nm, while the manual gearbox has also undergone revisions to improve shift feel and provide shorter ratios.

Overall, the BRZ offers a high-revving, relatively low-torque way to get around that doesn’t necessarily inspire trips to the drag strip, but driven right will have you shimmying briskly through the corners.

Power builds quickly between 4,500 to 6,500 rpm, and the exhaust tends to bark delightfully in a way that seems more familiar to a tuned WRX.

Down low though, the torque curve between 3,500rpm to 4,500rpm has a terrible flat spot, where everything seems to go limp momentarily whilst it catches its breath and then resumes the attack of the road in front of you.

Subaru have plumbed an Active Engine Sound into the cabin from the air intake, that does give a boy racer feel, but will get on your nerves after a while. It does beg the question of why car makers need to make cars sound ‘just right’.

During our test, fuel economy of the flat four was around the 9L/100km mark (Subaru claims 8.4), and because the short gear ratios mean 3,000 revs marries up to 110km/h, the exhaust can seem quite loud.

Structural enhancements include strengthening, reinforced mounting points for the front struts, transmission and rear struts, along with a larger rear anti-roll bar, revised springs and a re-programmed stability control system.

The cabin of the 2017 BRZ feels more upscale, continuing a trend for Subaru but its things like the smaller diameter steering wheel that now features built-in audio controls (these were added in response to owner feedback) that enthusiasts will look forward to.

Subaru may describe the interior as pure, but some customers may regard it as sparse. That said, the emphasis on basic functionality has its merits.

From the driver’s seat, you are confronted by a big rev counter, the speedometer sitting off to the left and the temperature and fuel gauges to the right. The design is clean but basic. That said, if readability at speed is the goal, then the display is a success.

The BRZ comes with standard climate control and Subaru Starlink touch screen infotainment, that helps it differ from the 86. There’s no Apple CarPlay or Android AutoPlay which is a disappointment.

The infotainment system is basic and pairing your phone to the BRZ is quite easy. There’s no support for call waiting though and navigating the settings is a little cumbersome overall. Oh and no SatNav.

Unfortunately, the BRZ isn’t all that comfortable or versatile beyond that. The front seats have plenty of room (with the seat right back), but they’re a bit too firm and could use some more adjustability.

Taller drivers would not be able to fit a race helmet on, let’s say that, and the rear seats are a tease, even a child seat will be a hard press. The BRZ, like its twin, is a glorified 2-seater.

Boot space would be good enough for a carefully packed weekend trip, but the load opening is quite narrow, and for some reason Subaru have decided to put a full-sized spare in the boot, which makes it completely unusable (no wheel cover, nothing. What were they thinking?).

The hood is especially low, which hints at the flat-4 engine and its low placement inside the BRZ. This year the BRZ gets some slight changes, with a new front bumper cap that flanks LED fog lamps and revised LED headlights.

We do have to talk about the wheel and tire package, which ultimately sets the BRZ apart from its rivals, showcasing its capabilities and demonstrating just how balanced and neutral it is.

It’s that package that lets you hang on the razors edge between under steer and over steer for what feels like days, breathe ever so slightly off the gas to get those few degrees of nose-in, and then get back on to aim the car into the corner, exit as you mash the accelerator with confidence, knowing the 2.0 litre boxer four-cylinder isn’t going to dump a tonne of power down the drive line.

Forget straightaway speed, as the overall experience is much more like driving a well-balanced classic British sports car, but without the unplanned pit stops. The clutch pedal feel has a little height to it, and spacing is ideally matched to the rest of the factory foot gear, which makes heel and toe downshifting easy and fun. Everyone’s a pro on corner entry in a BRZ.

We have but one criticism of the tyres, they’re very screechy. Tyre screech at almost every intersection gets on your nerves after a while (and secretly makes you smile in a perverse ‘listen to that’ kind of way).

But when you combine all the elements, what does it all mean?

It means simply this. The Subaru BRZ remains the best two door coupe in Australia for its value for money and its ability to thrill. It fits the iconic dream for most Aussies at a bargain price. Although, as mention earlier if there was to be an STI variant it would make it near perfect. So we hope to see some of those make their way to a Subaru dealer near you.

We are stoked with the recent news there will be an all-new and improved variant due in around two years (Subaru if you’re listening, build an STi variant with a 2.5 litre turbo boxer in it, give it some interior love and heap it with some cool gadgets, and SatNav – SATNAV people!).