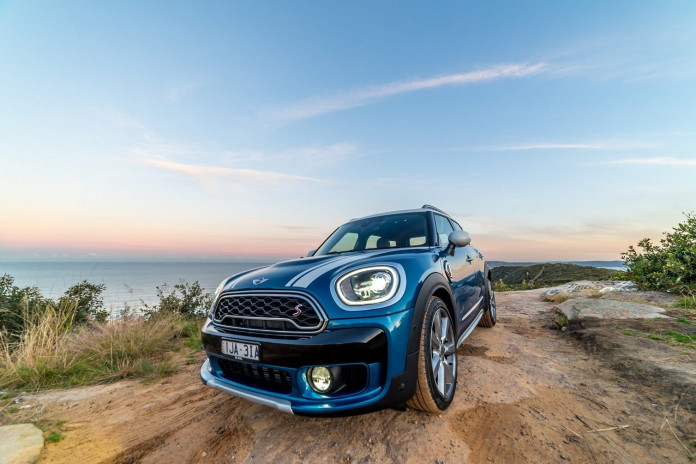 It’s the most XXL sized MINI ever, a full 20cm longer than ever before, and there’s even five seats for grown ups. Oh, and the boot’s a good size too. We speak of course of the 2017 MINI Cooper Countryman and Countryman SD All4.

In the same way that even the most hapless handyman could improve on a room previously decorated by the simple expedient of dropping a live hand grenade into an open tin of paint and retiring to a safe distance, you would justifiably expect this second generation MINI Countryman to represent a considerable improvement over its predecessor.

It’s now more of a crossover than ever, with the design to match, and being a MINI, the Countryman models, two of which we’re testing here, are clearly meant to be the driver’s car among small crossovers.

The suspension is sophisticated, and there are lots of chassis options (a stiffer sports setup, variable damping, the electronically controlled All4 all wheel drive). But it’s also the crossover for people who’ve got bags of cash to blow on personalisation and luxury.

Across the range there are eight versions, and they’re exactly what you’d expect. It’s Cooper or Cooper S, each fuelled by petrol or diesel, each of them with front wheel drive or All4 all wheel drive.

It’s powered by a three cylinder petrol engine to drive the front wheels. We also drove the range topping Cooper SD All4 (that’s the pretty blue car), packing a 2.0 litre turbo diesel engine that that sends power to all four wheels.

The standard Cooper’s off bat three cylinder burble, strong standard specification and competitive price should make it the pick of the range, and the most likely option for customers stepping out of a mainstream brand into something a little more interesting.

That little motor that could, lugs the Countryman to 100km/h in 9.6 seconds, feeling perfectly fine around town but ironically a little laboured in the country, where the engine’s modest outfits are exposed on hills and when overtaking.

Though its six speed automatic transmission is fine in isolation, it loses ground to other Countryman models that feature an additional two ratios, putting more demand on the least grunty engine in the line up.

There’s been a lot of effort on ramping up the cabin quality, but then the outgoing Countryman was a sad let down in that department.

On the outside, plastic wheel arch extensions, with eyebrow creases in the metalwork above, as well as roof bars and sill protectors all add to the visual crossover-ness. This remains the only MINI with angular rather than oval headlamps, and there’s a load of visual posturing going on in the lower face.

It’s smooth and powerful at low revs, only starting to sound harsh when you really go for it, and with all that torque, it’s great for overtaking. It will get you from 0-100km/h in 7.4 seconds.

The All4 gains a lot of extra kit as standard versus the standard Cooper Countryman and it’s older version, including navigation, Bluetooth, 19-inch alloys, emergency call and park sensors.

Oh and a cushion thingy that folds out from the boot so you can sit on the rear bumper without getting your clothes mucky. It weighs in at 1,530kg, which is 165kg more than a three cylinder Cooper.

The steering, even in non sport mode, is surprisingly heavy, so it tracks well on a motorway, yet goes into corners willingly enough. Push harder in the new car and you find there’s actually a little of that same MINI ‘go-kart’ feel from the previous edition here too.

Out on the road, over an identical test drive sequence, the Countryman and the SD All4 behave very differently. Putting the Countryman through some twists and turns saw strong under steer in slow bends, even in sport mode.

The system is it supposed to send drive rearwards in these circumstances, but it takes a little while to wake up, so you can get a mixture of under steer and mild over steer in the same roundabout.

On faster corners, and as the roads straighten out, it becomes a lot more predictable and actually reasonable fun.

The SD All4, on the same twisty road, feels composed and there’s little body roll. The quick, precise steering means it’s good fun to drive, and even the small windscreen means the Countryman All4 feels more sporty than its little brother in the range.

The ride is quite firm, however, so at low speed you’ll feel the lumps and bumps, it’s better on the motorway and settles down at speed.

Inside, the cabin design couldn’t come from anything other than a MINI, complete with all its nuances, but with some subtle cues to the taller stature. For instance, the air vents are upright oblongs, where they’re square in the Clubman and round in the hatch.

As usual for a MINI, the driving position is terrific, setting the pedals and steering wheel in perfect alignment. Seats and wheel adjust plenty, with an electric memory option.

The speedo stands above the steering column, adjusting up and down as it goes. It’s just about big enough (and its numbers are replicated in the optional flap type head-up display, which is a little annoying considering the windscreen is small).

But the rev counter is stupidly small and the needle has a short arc. Like a fuel gauge really. The fuel gauge itself is worse, a bar of cheap LEDs and a horrible orange colour.

Never mind though, the rest of the switch gear is quality stuff, set into high grade plastics with unfeasible numbers of custom trim options. You can even get stripy trim strips back lit in multi-coloured LEDs.

Not as psychedelic as it sounds but can look like a disco party when they are rolling through the cycle, with a modern meets retro theme that blends aircraft style toggle switches.

Our test model featured heritage inspired chestnut coloured leather with cream piping, something that wouldn’t look out of place in a 1960s MINI and still looks great today.

As standard you have a logical iDrive controller, with the option of a touchscreen. But the screen is some distance away and the controller works so well it’s seldom worth reaching for the display with your greasy fingerprints.

In the back, the seats give class leading room for adults and a good view out. As an option, the seats split 60:40, and slide forward so you can make the boot even bigger while still getting non grown up people in the back. The boot has a handy double position floor, even on the All4.

We’re in two minds about the Countryman though. The purists in our team are offended that MINI builds a large crossover and make an all wheel drive super hatch with no manual transmission.

Those same purists are not convinced by the lack of driver engagement and engineering innovation that made the original MINI from way back when, a must have proposition.

The non-purists though can see the Countryman in all its forms is a much more practical option for young families, that there’s significantly more space in the cabin, and the boot is 100 litres larger than ever before.

They can also see that the Countryman range is spacious, sensible and well equipped, doing an excellent job in addressing the flaws of its predecessor.

With the rush to SUVs, the Countryman represents a break from the norm for those that dare to be different.

Our road test vehicle was supplied by MINI Australia. To find out more about the 2017 MINI Cooper Countryman and Countryman SD All4, contact your local MINI dealer.