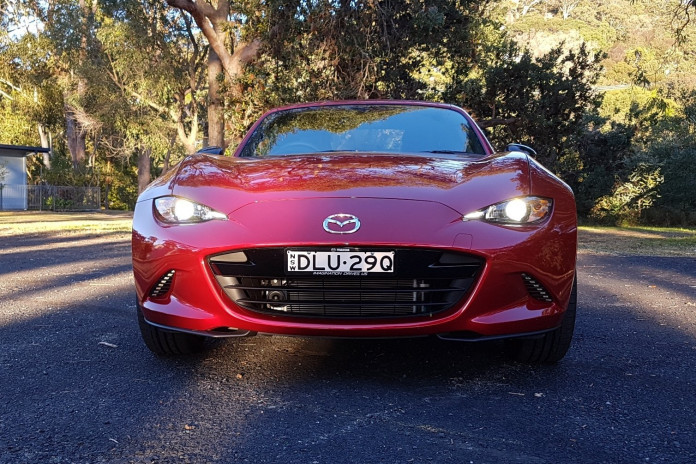 NOT for the first time, Japanese car maker Mazda has created a hard top for its funky little sportster, but this time it’s not just a solid roof for the MX-5. This time, they’ve taken all that was right about the rag top version and evolved it.

At it’s core it’s still a convertible, but a completely new open fastback silhouette and a full targa bar in place behind the cockpit has changed the look and feel completely. The 2017 Mazda MX-5 RF is good, really good.

The RF stands for retractable fastback, and while it does have a drop top, it’s not like the hard top MX-5 of old, it’s sleeker, and has some seriously ravishing good looks. At the same time it satisfies those who don’t like the complete openness of the soft top.

We know, from conversations with MX-5 owners over the years we’ve been getting around in cars, that there are more than a handful who like the idea of sticking their affordable little sports car on a race track, but yearn for structural stability.

They love the performance, the aftermarket tune ability, and the low cost of ownership, but don’t care for the convertible aspect of the car, especially at high speed. Step in the Mazda design team, and much consternation about hard tops and proper coupes.

Those wanting to ensure the MX-5 maintained its topless physique won the day, with a twist, with Mazda believing the incredible looking new RF will garner more than half of all MX-5 sales moving forward.

It’s the kind of car that makes you look back and smile every time you walk away from it. It’s because the exterior of the MX-5 RF is simply stunning. It’s because it has something the soft top doesn’t, an exotic flare.

The direct injection 2.0-litre under the hood remains a gem of an engine, it’s extremely flexible despite its modest 118kW of power and 200Nm of torque. Given the RF is heavier and pricier than the soft-top, the omission of a 1.5 litre version is no great shock.

Fuel economy is claimed at 7.0L/100km and paired with a 45 litre fuel tank, but we could only average 7.8L/100km, which is pretty close to the mark given we thoroughly enjoyed pushing the RF through some tight corners at high RPMs.

But the car’s greatest strength is the chassis. How it handles when pushed has always made believers out of anyone that has driven the MX-5. From the beginning, it has always possessed a dual nature a split personality if you will.

It’s soft and sporty to the relaxed driver, but thoroughly capable in the hands of an aggressive driver, and it really doesn’t matter which camp you fall into. The MX-5 works in both ways, but is now vastly better thanks to significantly improved suspension.

You can throw it into corners too fast and the car just gracefully slides wide through it, the tyres allowing a little drift, but thanks to that flexible chassis we spoke about, you never feeling out of control.

The new suspension package is firm and confident, but never harsh. There’s little dive, squat, or lean. It finally feels like the capable sports car that it is. The increased rigidity of the RF fastback has added to this too.

Inside, and despite the large bulge on the floor from the transmission tunnel, Mazda has built the interior with a focus on engaging the driver in, well, the actual act of driving.

The cabin provides an intimate setting from which you can really enjoy those Sunday morning drives or the frantic dart to work. Everything is within arms reach, with a superb driving position, placing the vertical skewed steering wheel right at your chest.

Pedal placement is also perfect, so you can heel and toe like a pro (in the manual, obviously), and the gear shift action is slick, short, and precise. It’s one of those cars that actually feels fun as soon as you sit in it.

The new 4.6-inch infotainment system is good but not great. It’s not ground breaking but is seen as an improvement over the previous screen. MZD Connect is coupled with Mazda’s universal hand controller setup to use the system.

There’s no Apple CarPlay or Android Auto yet, but you can connect your phone via Bluetooth or USB for audio streaming and access to social media (really), although we need to ask the question here, why, just, why?

Delve into the system via the rotary dial and the menu items are clear and easy to use but the sub menu system can become a bit of a headache, especially when you’re on the move. It also feels like the system is sitting behind an extra layer of glass.

There’s still no reach adjustment on the steering wheel either, and the boot, while reasonably deep but quite narrow, is a small 130-litres. If you plan to go away in your little RF, you’ll be travelling light.

We wondered why the MX-5 RF put the driver and passenger windows up when you put the top down. We figured it out real quick. The air swirls are tornado like in the cabin, particularly at higher speeds.

Having the windows up keeps the wind storm isolated to the top of your head.

All that aside though, the 2017 MX-5 RF is an engaging little sports car. It attracts attention, and its open roof connects you to the outside world. It’s about going places, not for the sake of going but for the journey that gets you there.

Our road test vehicle was provided by Mazda Australia. To find out more about the 2017 Mazda MX-5 RF, contact your local Mazda dealer.