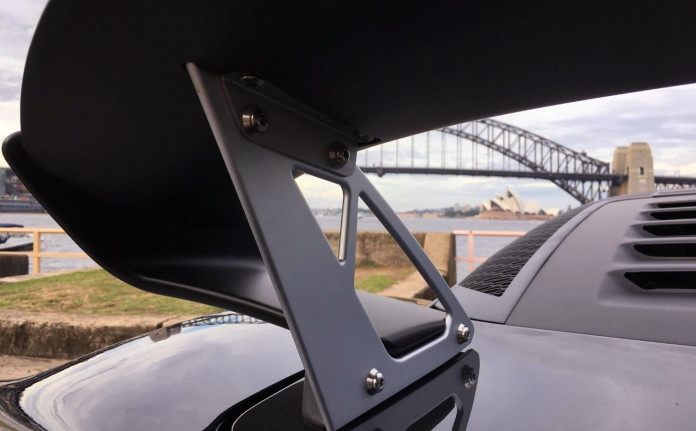 THREE-MICHELIN star dining isn’t for the everyday. You go to a three-Michelin star restaurant because you love food, flavour and want an experience.

By the same token, the Lotus Exige is not an everyday car. You don’t buy an Exige because you’re after a daily drive. It’s all about the experience.

If you’re looking for practical reasons to buy an Exige, stop reading now. There are none.

There are however plenty of reasons to buy an Exige. It’s a work of art, a thing of beauty. It’s raw. It’s naked. It’s borderline pornographic – and you’ll be joining an exclusive club.

As a way to further enhance the Lotus ownership experience, Lotus Cars Australia has created the Lotus Lifestyle – an owner’s club if you like, to help owners get the most out of their vehicles.

Now back to the Exige Sport 350. Sleek, low lines define the Exige’s undeniable good looks. It’s just 1129mm tall, it could easily fly under the radar.

However, its 3.5L supercharged V6 – which once started its life resembling the engines on the Toyota Aurion production line – make sure the Exige’s presence is known.

Then there is the magical button on the side of the steering wheel that opens up the exhaust and lets it exhale… loudly. Back off the throttle and you’ll hear the sounds of childhood breakfast – snap, crackle and pop. Only it’s so much more satisfying.

The six-speed manual box is a delight to work your way through, but it does come with a heavy clutch. For the Exige’s intended track purpose it’s not an issue, but it makes traffic all that more infuriating.

Stopping is just as quick as its acceleration courtesy of the AP Racing brakes, the one we drove came with the optional two-piece high-performance pack.

In the compromise between drivers car and commuter, power steering was omitted from the Exige. Sure, at low speed it is horrendous, but that’s the trade off for the response of a kart once you’re moving – incredibly direct steering.

The Exige lacks creature comforts such as seat warmers, satellite navigation or an infotainment system (the latter two available as an aftermarket add-on if you’re prepared to cut your dash) – but it’s such a joy to drive that you don’t even notice.

Ours did have the optional Clarion CD/MP3 player/radio option, but the dulcet tones from the mid-mounted engine was all we wanted to listen to.

The only feature that we would add is a reversing camera as standard (also included in the previously mentioned aftermarket add-on).

While it does have reversing sensors, the lack of rear vision is mildly unnerving while reversing, having to rely almost solely on the two side mounted mirrors. The rear-view mirror does however give a teasing view of the Harrop supercharger… and not much else. A glass rear window is an option.

The lightweight aluminium bonded chassis doesn’t leave much in the way of interior space. In fact, it’s rather snug inside. Two well-built blokes make for a cosy fit inside, but more petite figures will not notice so much. The same goes for getting in, and extricating yourself from it.

Oh yes, forget any notion of dignity getting in and out of it. There is a wide sill to negate, along with small door openings. It’s difficult for passengers and almost impossible with the steering wheel to deal with as well – even a yoga instructor would make comment.

The topless options obviously make it ten-fold easier, and we’d definitely be turning to a removable wheel if it was just a track warrior.

But there is no point dwelling on the negatives of the Lotus Exige. It’s a thing of beauty. It’s not designed as a daily driver – it’s engineered as a driver’s car. There are no buttons on the wheel, there are no dials and distractions. It’s driving in its most distilled form.

It’s not a perfect car, but we’re willing to bet you’d still find something you don’t like in a three-Michelin star dining experience too. In saying that, the Exhaust Notes Australia rating system doesn’t do the brilliance of this car justice.

Lotus Cars Australia has a national dealer network that includes Simply Sports Cars in Sydney, Motorline in Brisbane, Krause Motors in Adelaide, Zagame in Melbourne, and Auto-Strada in Perth.

Our 2017 Lotus Exige Sport 350 was provided by Simply Sports Cars in Sydney. To find out more, contact the Lotus Cars Australia dealer in your state.

Pros – astounding raw power; agile and direct steering; everyone becomes your best friend.
Cons – difficult to get in and out of; needs a reversing camera as standard; the lack of power steering makes you rediscover muscles you forgot about.