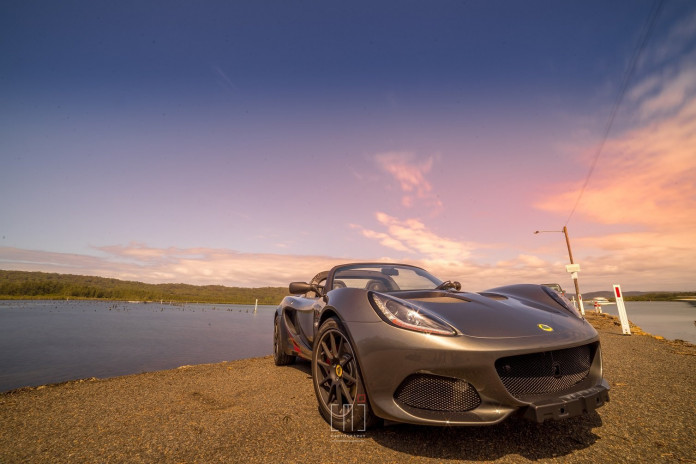 INTRODUCING today’s player – the pint-sized soft-topped member of the Lotus range – the 2017 Lotus Elise Sprint 220. It looks like a toy we here you say, and that may be so, but it’s a light, nimble and wickedly quick play thing.

The Elise Sprint 220 pushes out just 160kW of power and 250Nm of torque from its 1.8-litre supercharged Toyota power plant; not much more than your average family sedan. But if that’s all you see this little car for, then you’re missing the point – big time.

You see, the MY17.5 version of the Elise Sprint 220 weighs in at less than 880kg. Contemplate that for a minute, that’s half the weight or more of than average family sedan. Now contemplate this, 0-100km/h in 4.5 seconds.

That got your attention didn’t it. In case you’ve missed it, it’s all about power to weight ratio and the 2017 Lotus Elise Sprint 220 has it in spades. It’s a good 40kg lighter than the previous version too.

That weight reduction comes in a number of areas, including carbon race seats, new wheels, and carbon access panel, engine cover, and roll over hoops. There’s also carbon door sills to add to the unique look and feel of the Lotus.

Those very door sills also make it easier to get into the Elise with the roof on, especially if you are close to or even over the 180-183cm in height kind of range, as they’ve made the access point 10mm lower than if those sills were standard.

The stereo had Bluetooth and USB connectivity to allow you to plug in your music from a stick, or connect your mobile phone, but for the life of us we couldn’t make that function work.

That said, the Clarion sound system was very good, as were surprisingly comfortable carbon seats. We say surprising because they are literally bolted to the floor and while they can be adjusted, movement range is limited.

It also came complete with alcantara steering wheel and red brake calipers to match the red graphics on the car, while new front and rear bumpers complete the upgraded model’s new look and feel.

Inside, because of the compactness of the Elise, it feels like there’s virtually no storage save for the small boot, but there are little nooks everywhere.

There is a parcel shelf behind the seats, two pockets under the air vents, spaces either side of the steering wheel and a shelf under the passenger air bag, plus a centre console storage bin behind the hand brake.

It runs a very tidy 7.5-litres/100km in the fuel department, not bad for a raw and dirty little sports car.

It’s that raw and dirty, stripped back if you like, nakedness that makes the Lotus Elise (and it’s bigger sibling, the Exige) such a cool car. It’s got the same open gate gear shifter as the Exige Sport 350, and like the Exige, is a pure 2-seater.

Behind the wheel it’s loads of fun to drive. It sounds good, very good in fact. Lotus have worked hard to get it to sound ‘just right’ for a small supercharged four and under acceleration, that sound is spot on.

Holding the revs at mid-range though (when cruising at 110km/h for example) will likely get on your nerves in time though, as it can make the spritely little Elise a bit noisy, especially when you’ve taken the top off.

The Elise Sprint 220 has a roll off soft top that can be stored in the boot, and allow for the joy of open top cruising, which is easy to get on and off when you need to, should the rain come or the whether not suit.

The ride and handling is exceptional, it’s like driving a race car, and its light weight and power to weight ratio make it a simple joy to drive. Add some moisture to the road and it will take weeks to wipe the smile off your face.

So what are the downsides to the 2017 Lotus Elise Sprint 220? Well there aren’t many, but the lack of high-end tech, and the sheer basic-ness of the car and its interior and features will simply be too much for some to cope with.

The engine is noisy at mid-range revs when cruising. It’s got a few blind spots too and the limited movement in mirrors can also be very frustrating.

Lastly, if you’re a big strapping person, or your tall, like 185cm tall, you’re going to seriously struggle to get in and out of the Elise without taking the roof off and pretending you’re in the Dukes of Hazzard.

But, if you can look past all that, and the price tag too, which may bother some, then this tiny little sports car may be the most fun you can have with your clothes on.

It comes in a range of colours that includes our metallic grey test car, electric light blue, solid red, solid yellow and about a half dozen other colours. Colours are subject to availability so buyers should discuss with their local Lotus dealer.

Lotus ownership in Australia also offers access to Lotus Lifestyle – an owner’s club if you like, to help owners get the most out of their vehicles. Lotus Lifestyle offers social outings, exclusive events, casual track days, driver tuition, road rallies, and even the opportunity for competitive motor sport at various levels.