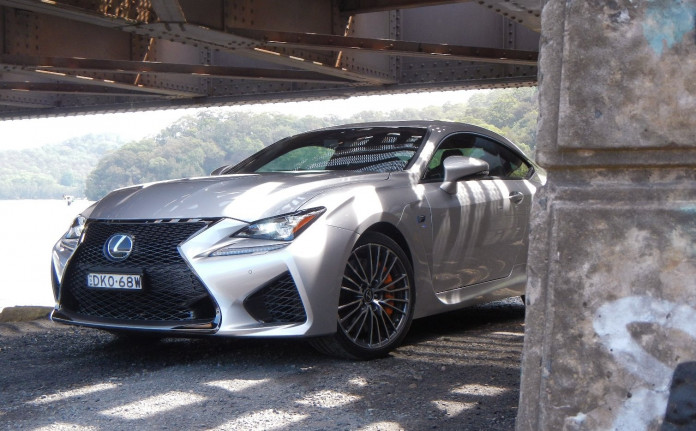 RC F. It could stand for any number of things; Really Cool and Fast, or how about Race Car Fun (and let’s not forget race car spelt backwards is still race car).

The 2017 Lexus RC F is raw and beastly, while being refined and stylish, all at the same time. It is a truly beautiful car to drive.

Upgraded for 2017, with the fitting of the new Adaptive Variable Suspension system (AVS), a retractable rear wing, some new colour choices and a tweak in grille styling, the RC F is amazing eye candy at the kerbside (plenty of passers-by thought so too, with people snapping pics on their phone and asking questions – often).

Climb in and push the start button though, and oh my, doesn’t the high performance 351kW 5.0-litre V8 (that punches out 530Nm of torque) sound unreal. Right then, let’s stick it in drive, and away we go. Actually, this is where we pause, to look at the first of just a few things that are wrong with the RC F.

It still has the push to the floor foot pedal hand brake, and we don’t like it. The brand-new GS F we drove back in December came with an automatic park brake, it should be here in the RC F too. The back seats are nice, but far from family friendly too (you might fit a baby seat in there but two adults, forget it) – but it’s a performance coupe, not a family car, designed for the car connoisseur, or for mum and dad to escape the kids.

We’ll stay paused too for the lack of Heads Up Display (HUD), another tweak Lexus could make to ensure this beast of a car is all that, and a bag of chips. It does have the new look touch pad controls in the console though (a handy upgrade).

Now where were we, oh yes, driving. Hmm, the temptation to shove it in Sports+ mode and switch the Torque Vectoring Differential (TVD) to Track mode and simply tramp the rear-wheel drive hard, is strong. Very strong. But we’ll resist, for now.

A quick explanation of the AVS system is warranted first. AVS electronically monitors and controls the damping force at all four wheels simultaneously, based on road-surface conditions and driver preferences.

Using a range of sensors – including G force, yaw-rate and speed sensors – the system is designed to improve ride comfort and handling stability, particularly on rough roads, while also providing greater stability when cornering.

The full AVS package has seven damping-force control strategies (and 30 different levels of control), including anti-dive and anti-squat, and works with the vehicle’s comprehensive safety systems for ideal composure, helping suppress body pitching under heavy braking or hard acceleration.

Lexus has linked the system to the  Vehicle Dynamics Integrated Management (VDIM) safety technology and Drive Mode Select control. In a nutshell, this means that in ECO, NORMAL, and SPORT S modes, the Drive Mode Select system prioritises ride comfort while contributing to greater handling stability, based on driving operations and the road surface conditions.

Resistance is of course futile when it comes to the 2017 Lexus RC F, and it’s drive time. We wind the car out to its full potential, using a secret long and winding road (aka our private test track) to put it through its paces, late at night, lights blazing.

Handling on corners is exceptional (thanks to that retractable rear wing), acceleration dirty and angry in Track/Slalom mode and Sports+. Some will struggle with this too, as it feels really squirty (yes, we know that’s not really a word) if you don’t drive it hard (when you have it set up with all the go-hard settings switched on).

It’s exceptionally responsive if you push it like the road is your friend, like it’s a race car, climbing Mountain Straight at Mt Panorama at Bathurst. It will leave you grinning from ear-to-ear, even when you drive on the razor’s edge between control and out of control (on a safe race track of course).

Lexus also claims a fuel economy of 10.9l/100km and wait for it, we seriously did better than that, our average over eight days (with some seriously hard driving) was 10.6l/100km (sure when we drove it hard that figure was much uglier, but over a week of variable driving conditions, in a massive V8 – 10.6 rocks).

A second enhancement package (which swaps out the machine finished wheels for polished ones) brings it closer to the legendary Carbon model, which includes a carbon fibre bonnet, roof and rear wing, and is the absolute pinnacle of the model range.

Our version hits the road at just on $153,000 drive-away (with the base model at around $150,000 drive-away), while the Carbon will set you back a little over $171,000, again drive-away. It comes in eight colours (with four interior trim options), including Onyx, White Nova, Mercury Grey, Sonic Silver (a new colour for this year and the colour of our test vehicle), Graphite Black, Infrared, Lava Mica and Cobalt Mica.

We’ll leave the last word in this review to one of our journalists, who was kind enough to return the car to Lexus (and had the car for the last three days of the test). On his way, he stopped to put fuel in the 66-litre fuel tank, and text the office. “This thing’s freaking awesome. How about I keep it instead of returning it? Because I want one!”

The 2017 Lexus RC F was provided by Lexus Australia. To find out more, contact your local Lexus dealer.