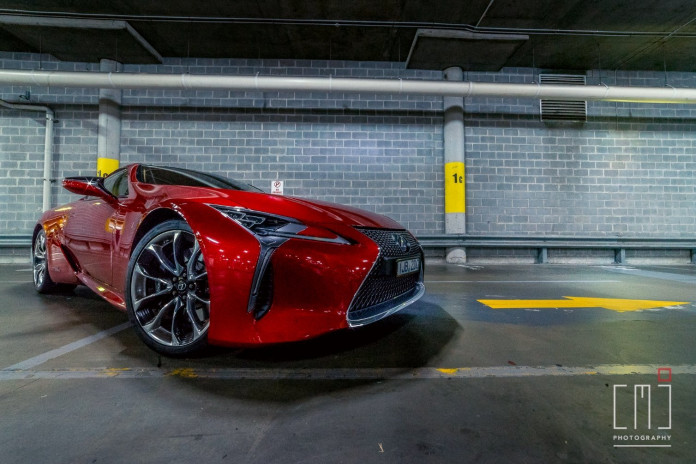 THERE’S something almost dirty about driving the LC 500 and its hybrid twin, the LC 500h, and we mean that in a nice way. These cars are super unique, super powerful and definitely super good looking, with a style all of their own.

It’s why it feels kind of wrong to climb behind the wheel of one, fire it up and push the accelerator down hard enough for the beast within to ignite and for the LC 500 to roar to life, fearsome, angry and ready to rumble.

Inspired by the astounding LFA, it’s that very juxtaposition between sublime style and raw power that makes the LC 500 and LC 500h such an unusual proposition.

The LC 500h is powered by a 3.5-litre hybrid V6, coupled with Lexus’ first ever multi-stage transmission (which combines a traditional 4-speed transmission with a CVT), that provides a very different driving experience to V8 under the hood of the LC 500,  using less fuel along the way – just 6.7l/100km – while having 264kW of power.

We need to pause here and say the two cars are very different despite having the same exterior and interior styling, and safety features. The V8 is angry, it’s tail happy in the rear end, it’s got an awesome suspension package that makes it wicked fun to drive, and despite some lazy points in the torque range, it delivers.

The hybrid, while still having the same tail happy rear end and suspension, has some flaws. The flaws come because it lacks the roar and excitement of a thundering V8. It just doesn’t sound awesome – to be expected with a performance hybrid we suppose, but off putting all the same.

The gearbox configuration is odd too, and we just didn’t love the way it shifted through its pretend 10-speed torque range. Right then, hit the play button again and continue reading on.

Both variants get an active exhaust system, Torsen limited slip differential, the uber cool and life altering adaptive variable suspension, paddle shifters and for the record, both models are rear wheel drive (and like to cut loose should you feel the need).

On the outside, both models feature the brand’s new look spindle grille, with chrome surrounds and a unique 3D design, a sleek glass roof (our test vehicles were both fitted with the optional carbon fibre roof instead), and high-tech 3-eye headlights, which are exclusive to the model.

There’s also two-tone forged 21-inch wheels and what we reckon is one of the coolest design features on the outside of the LC models, the inverted L-shaped LED tail lights, which give the LC 500 and 500h an unusual but very cool looking rear end. The door handles are also recessed too for extra style and aerodynamics.

An optional retractable rear wing is also available (and was on both our test vehicles as well), while a beefy performance brake package is fitted as standard to ensure maximum stopping power is at the head of a host of safety features.

It doesn’t stop there though, Lexus has thought of pretty much everything when it comes to safety, including automatic high beam, hill start assist, vehicle stability and traction control, a sway warning system, electronic brake distribution, and brake assist.

Inside, the interior looks amazing, particularly if you choose the optional ochre alcantara leather package. It’s incredibly stylish, comfortable and well down-right sexy, unless of course you want to sit in the back seats, they’re super comfortable, but with a seriously sloped roof and the unusual body shape of the LC, they’re pretty much useless.

But there’s a bunch of really cool interior features that make the LC models just awesome, including the climate concierge. You can think of the concierge like this; take dual zone climate control, seat heating and seat ventilation, and sync the whole lot with an intelligence moisture system that makes your comfort feel just right – all the time.

Driver’s will find some six (if you count the customised version) options when it comes to performance settings, including Eco, Comfort, Normal, Customised, Sport and the wickedly unhinged Sports + mode. There’s also a slide-out style digital display that’s straight out of the LFA.

A 13-speaker 918w Mark Levinson sound system will provide concert hall quality sound (even when it’s Metallica in the concert hall), while the excellent heads-up display ensures you can focus on the driving experience throughout your journey.

The infotainment system features advanced Bluetooth functionality, Miracast, digital radio, the latest version of the Enform app suite and even USB video playback, but it’s still not a touch screen, still has the odd centre console control that is the hallmark of the Lexus model range, and is still occasionally very clunky to use.

Overall though, despite its various minor flaws, the LC 500 is quite possibly the best performance car Lexus has ever built, and it’s hybrid brother or sister, as the case may be, while smaller on performance and way down on the ‘hell yeah’ excitement meter is still a genuine thing of beauty to pilot.

Both the LC 500 and LC 500h are priced at around $165,000 plus on-roads and optional add-ons (you could end up forking out $220,000 drive away if you choose all the cool bits) and come in the same range of colours, including Titanium, White Nova, Slate Grey, Sonic Silver, Onyx and Graphite Black.

Our 2017 Lexus LC 500 and LC 500h were provided by Lexus Australia. To find out more about either model, contact your local Lexus dealer. LC 500h pictures courtesy of CMC Photography.