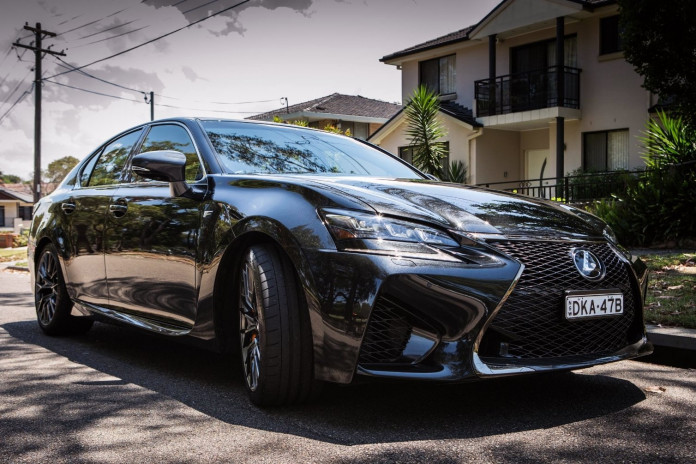 Dig if you will a picture (the lyrical lines are coming thick and fast today aren’t they). One of the most awesome looking performance sedans on the market today. Powered by a 5-litre 32-valve DOHC with Dual VVT-i V8 punching out 351kW of power and 530Nm of torque through an 8-speed sports direct shift transmission.

An engine noise that is nothing short of pulsating. A car set to track mode (yes it has track mode). A foot slowly caressing the accelerator to the floor as we push the brand new Lexus GS F out to close to 200km/h (on a very safe closed private road for the record).

Imagine for a moment that the occupants of this car are grinning from ear to ear (because just quietly they are), at the sheer exhilaration that is a Lexus GS F. Caught up in the moment of an experience like no other (it’s like driving a Ferrari or a Lamborghini – it’s that kind of automotive joy ride).

The driver of this test car has been behind the wheel of a GS F before, but this is different, the experience is new. The 2017 model is another step up from what came before it.

So what makes this model all that more special compared to the 2016 Lexus GS F we tested early last year, I hear you ask.

Well a number of things actually, but the major suspension upgrade is the biggest factor. And it will take a bit to explain, so here goes.

Lexus has advanced the handling stability and ride comfort of its premium GS F sports sedan by incorporating the latest driver-selectable Adaptive Variable Suspension (AVS), which electronically monitors and controls the damping force at all four wheels simultaneously, based on road-surface conditions and driver preferences.

Using a range of sensors – including G force, yaw-rate and speed sensors – the AVS system is designed to improve ride comfort and handling stability, particularly on rough roads, while also providing greater stability when cornering. For the record, the latest AVS iteration offers 30 levels of damping force, switching automatically as required to ensure precise suspension control on all road surfaces.

When cornering, it applies increased damping force in response to steering input, yaw rate and vehicle attitude, ensuring exceptional handling and reduced body roll through the turn while also providing a smooth, comfortable ride. On rough surfaces, it reduces damper force to help absorb vibrations to maintain a high level of comfort.

And finally, Lexus has linked the system to the  Vehicle Dynamics Integrated Management (VDIM) safety technology and Drive Mode Select control. In a nutshell, this means that in ECO, NORMAL, and SPORT S modes, the Drive Mode Select system prioritises ride comfort while contributing to greater handling stability, based on driving operations and the road surface conditions.

In SPORT S+ mode, the focus of the damping-force control is handling stability. In addition, the SPORT S+ mode automatically switches the power train, electric power-assisted steering and VDIM to Sport mode.

Hopefully that all makes sense. Now more on the car itself, and what it’s like to drive.

Lexus claims 11.3l/100km for fuel economy but to be honest, we couldn’t get close, 12.4l/100km was the best we could manage (there was a lot of SPORT S+ driving), but we were having bucket loads of fun in the GS F (so much so we found it seriously hard to give it back).

It needs a bigger fuel tank (66 litres is not enough), there’s no denying that, having to fuel up every 2-3 days is incredibly frustrating, because not only does it mean your using a lot of fuel, it feels like the fun police have come and taken away your toy.

Outside, from the big Lava Mica (aka orange) Brembo brakes, forged 19-inch wheels, custom paint colours and the F logo everywhere, the GS F has a style all of its own – the aggressive styling of this car makes you sit up and take notice. LED headlights, quad exhaust ports, a carbon fibre boot-lip spoiler and carbon fibre reinforced plastic grille complete the look.

Inside, the boot offers a very solid 520 litre load space, and their is a sporting feel to the steering wheel, seats and dash (all with leather of course). Lexus has also stuck with the remote touch joystick from the previous GS F (rather than the touch pad that has made its way into a couple of the 2017 models).

There’s no touch screen again, with the joystick used to control the whopping 17 speaker Mark Levinson surround sound audio system, the SatNav and all the other controls you would normally utilise on an infotainment system (Lexus doesn’t do touch screens in general, much preferring the joystick or new look touch pad – which is a unique point of difference).

Lexus Enform is also on hand as part of the new infotainment software (think of it as Google maps for your car – helping you find things like restaurants, petrol stations etc. – it even lets you view the weather). The heads up display is back too from last year, along with the moisturising air conditioning system.

On the safety front, Lexus offers everything but the kitchen sink. There’s an advanced pre-collision system (which will stop the car for you in an emergency), brake assist, blind spot monitoring, rear cross traffic alert, a reversing camera (as well as front and rear clearance and reversing sonar), and 10 SRS air bags.

The 2017 incarnation of the GS F, with all its extra bits, will set you back between a little over $164,000 and $173,000 (drive-away) depending on the interior bits and paint colour you choose, and yes the price is steep, and dearer than it has ever been, but it is a better car.

Some seven enhancement packages ranging in price from $1,900 to $6,100 each are also available within that price range (you’d only choose one, as each package is better than the previous one), that add even more individual enhancements to an already outstanding looking car.

It comes in the following colours; White Nova, Sonic Silver, Titanium, Graphite Black (as tested), Slate Grey (new for the 2017 model), Vermillion, Cobalt Mica and the very orange Lava Mica. It comes with a 48 month/100,000km warranty.

We do have to warn you though, if you test drive the 2017 Lexus GS F – you will want to own one. You won’t care that the fuel tank is small or that it’s thirsty. You’ll simply be wowed by the sound of the V8, the power, and the incredible performance of the AVS system.

You will walk away grinning from ear to ear and wondering that if you die tomorrow, is it possible that your life would actually be complete.

The 2017 Lexus GS F was provided to us by Lexus Australia. To find out more, visit your closest Lexus dealer. Pictures courtesy of Dan Cantero Photography.

Pros – outstanding ride and handling; big V8; exceptional styling – inside and out.
Cons – fuel consumption; needs a touch screen; dearer than ever before.