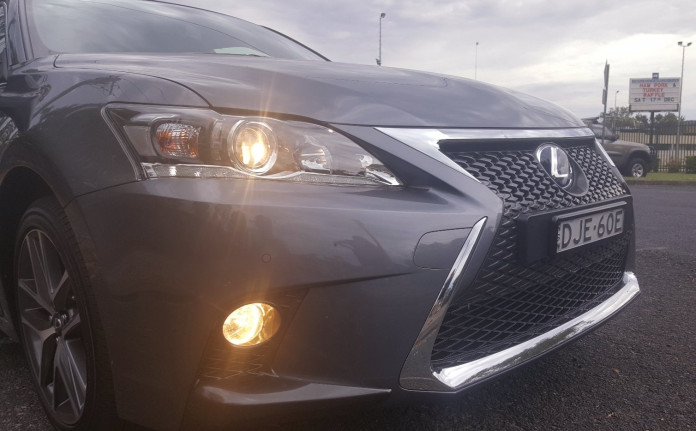 LET’S face it, most car owners still shy away from electric or hybrid vehicles, especially hard-core car enthusiasts. They have always been viewed as drab, weird, uninviting, oddly designed cars that “hippies” or “tree huggers” would drive.

That view needs to change though, with more manufacturers pushing towards a future that includes electric, hybrid and even hydrogen fuel cell vehicles.

With that mainstream manufacturer engagement, has come increased power outputs, a genuine thrill factor (Tesla Model S or the new Honda NSX anyone?), and significant improvements in styling.

Enter the 2017 Lexus CT 200h F Sport, which doesn’t push many boundaries and hasn’t actually changed all that much in the last six years. The CT 200h is essentially Lexus’s take on the Toyota Prius (which is much better than the HS 250h, let’s all forget that ever existed, shall we?).

Since its introduction in 2011, there have been minor styling alterations, mostly to ensure that the brand’s ‘spindle’ grille design is synchronised across its line-up (which occurred in 2014). The real changes have occurred underneath that styled up exterior, where the engineers have clearly been told to resolve some of the criticisms levelled at the previous model.

Lexus has broken out the structural and suspension engineers to provide the CT 200h with more strength, better springs and improved sound deadening (the road noise is still terrible).

The Lexus Hybrid Drive power train in the F Sport combines a 73kW/142Nm 1.8-litre four-cylinder petrol engine and a 60kW/207Nm electric motor for maximum combined power output of 100kW (you cannot simply add the two figures together as the engine and electric motor peak at different points in the rev range).

The power output is on par with a base model Toyota Corolla. A nickel-metal-hydride battery powers the electric motor, and a continuously variable transmission drives the CT’s front wheels.

Although the power is on the lower end of the scale, the CT 200h’s transmission has been remapped for a more linear build-up of revs, in the hope that a more conventional and intuitive driving experience will result. We’re not sure it’s really helped. When a little heavy right foot is applied, the CT 200h is slow and unresponsive.

Once the transmission has finished connecting itself to the ECU and engine and realises you want to move, the lights have gone red again or the gap in the traffic has disappeared – in Sports mode, you might have a slightly better chance.

For hybrid uninitiated, when starting it up, you may find yourself wondering if you hit the button hard enough (you will sit there turning the car on and off not realising its on – there’s no noise). If the instrument panel lights up, even if you can’t hear anything you can be assured you’re good to go.

The electric-only range remains limited to about 2km at low speed but during this period does present the problem of pedestrians finding it hard to hear you coming as well.

Around tight corners on winding bumpy roads and up and down hills, the steering is well weighted and responsive – the electronic power steering system and steering column have both been revised to fit changes to the suspension and chassis calibration.

Body roll feels minimal and it’s easy to handle on urban roads, but weighing in at 1440kg, the CT 200h is a little chubby for a small hatch. GVM tops out at almost 2 tonnes, 1845kg to be precise. And the powerplant feels the strain. Especially trying to mount an overtake, or climb a small hill. Lexus may claim a 0-100km time at 10.3 seconds, but it sure feels a lot slower than that.

We know that not everyone likes to drive hard, be on the edge of their seats every time, or hear the engine at full noise screaming round some tight twisty corners, but being an F-Sport you sort of expect some or a little of it.

Inside, our first impressions are of a much more complete package than the entry level model, with the F Sport’s split-level dashboard/console layout offering a clean and user-friendly feel (despite the abundance of hard grey plastic).

Things get a little funkier at night, when occupants are met by a dazzling array of light and colour.

The front seats are spacious and supportive without being overly soft. The stereo is good but the Mark Levinson premium sound system is missing, although Bluetooth streaming offers great connectivity.

The centre console includes USB and AUX ports, as well as a removable holder that perfectly fits an iPhone but doesn’t cater for larger ‘phablet’ style phones. Oddly, as the holder sits on top of the ports, you can’t use the two at the same time. You have to stash you phone elsewhere.

The sunken driving position is in-sync with the console ergonomics, with the cluster of buttons sloping gently down from the dash, and is high through the centre. For us, at the wheel, everything was at our fingertips (no need to lean forward or sideways to change things such as the air-con or radio).

There is an adjustable electric driver’s seat, front seat heaters (no seat ventilation though like other F Sport models), and no auto high beam (or LED). You will however find pre-collision safety, radar cruise control, blind spot monitor with rear cross-traffic alert, lane departure warning and Lexus Enform.

Overall, the CT 200h is a comfortable suburban cruiser and the upgrades have taken its styling and sporty look to a whole new level (it’s the best-looking hatch in its class).