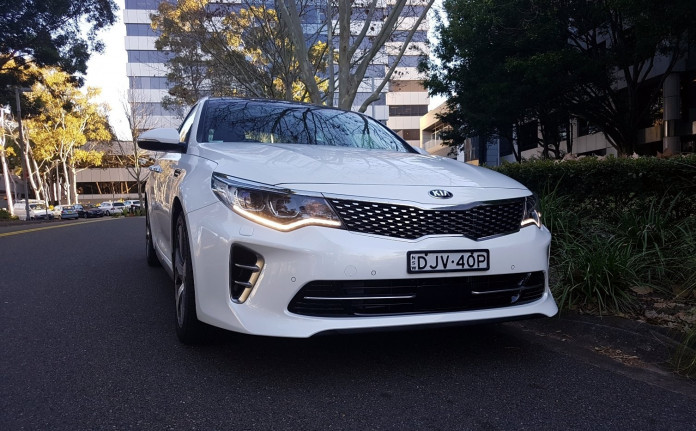 WANT a car that sounds good, looks great, and has plenty of go fast, while still remaining under $50,000? For Korean car maker Kia, the desire to further spice up its Optima model range has come in the form of the 2017 Kia Optima GT, which now has a wicked turbo boosted engine.

Packed with European styling, the upgraded Optima GT, which transitions from the 2016 model, gains the new engine, and a host of tweaks across the car, both inside and out to give it a renewed cut through in the market place, and add to the attraction factor for drivers.

That engine is a 2.0-litre 4-cylinder turbo petrol offering that pushes out 180kW of power and 350Nm of torque, and is coupled with a six-speed automatic transmission. Kia claims a fuel economy number of 8.5-litres per 100km, and we managed to get to that and hold it for quite a length of time, we even managed to get down as low s 8.2l/100km.

There’s a question mark over that awesome throaty sound the Optima GT makes though, despite the excellent exhaust system. Kia has fitted the 2017 Optima GT with an ESG, or an electronic sound generator as it’s officially called (like many other car makers do, so it’s not unique to Kia per say).

In essence it makes the car sound a little like an old school Subaru under acceleration, throaty, and a little brutal. We liked it and felt that the sound gave the car a bit more of a sporty feel that would have been lacking otherwise, but it will divide opinion, some people genuinely don’t like the idea of speakers for engine noises.

Sitting on 18-inch alloy wheels with 235235/45 R18 Michelin Pilot Sport 3 tyres, the ride and handling of the car and comfort levels are brilliant. Front wheel drive coupled with the suspension tuned to Australian conditions make this car excellent to drive around the city and take away for the weekend.

It will inspire confidence and make all the drive effortless. Ventilated and heated front seats are also on hand to keep you cool in summer and warm in winter, and there’s the ever handy smart boot release as well, for when you need help opening the boot. You will arrive at your weekend getaway feeling exhilarated, instead or tired.

There’s also new LED tail lights and daytime running lights and a sportier front bumper to add to the new and improved look and feel. It’s hard to go past the awesome looking red tubular sports leather seats with contract stitching, complete with GT logo and the massive panoramic sunroof either.

There’s great leg room everywhere, but for those who are taller, the rear headroom, like many cars in this class, is a struggle. Console storage is good but not great, there needs to be a little more of it, but the boot, well that’s just huge, some 510-litres of storage for sports gear, shopping or that weekend away we were talking about.

The 2017 Kia Optima GT is a great drive, and there’s plenty to like about it. It hits the road $44,990 and comes with Kia’s now standard seven year warranty, making it a genuine contender for anyone looking for a mid-sized family car that has a little sporty edge.

Our 2017 Kia Optima GT was supplied by Kia Australia. To find out more, visit your local Kia dealer.