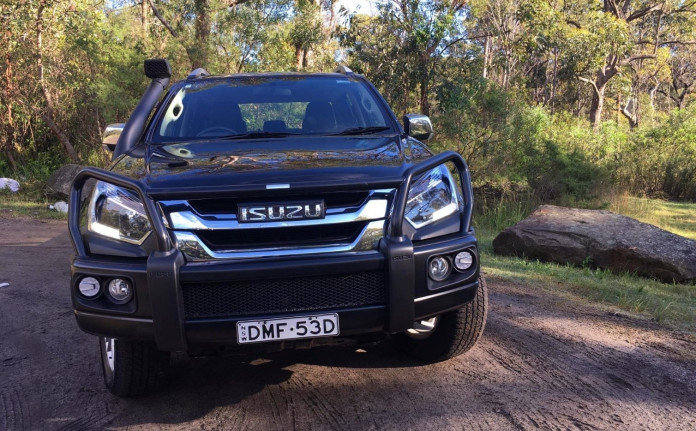 IT’S big and it’s beefy, and the 2017 Isuzu D-Max LS-Terrain is going a long way to helping the Japanese brand reach new heights with its 2017 model update.

While there is no change to styling across the D-Max range, and most people would mistake the 2017 model for older editions, there is a lot to like about the drive train upgrade that has been developed specifically for the Australian market.

Launched in February, the drive train features a torquier 3.0L inter-cooled diesel four pot, with the Terrain available with a six-speed automatic transmission (a manual transmission is also available across other models in the range).

It isn’t the highest torque figure on the market, sitting behind the market leading VW Amarok and Ford Ranger, and the Ranger’s cousin, the Mazda BT-50, as well as the Colorado (which the D-Max had a cousin relationship with until recently).

That said, there is certainly something to be said for the compelling value argument Isuzu makes, with the top of the range model priced at $54,200 and entry level from $28,500. The value argument also stacks up even more with the brand’s new five-year/130,000km warranty, five-year roadside assist promise and five years of fixed price servicing.

Exhaust Notes Australia put the LS-Terrain edition of the D-Max through its paces and was impressed by fuel efficient package – Isuzu claims 7.9L/100km fuel consumption.

Around the city and suburbs, the additional gear in the Aisin automatic gearbox (up from a five speed in previous models) was hardly notable and the D-Max performed much like many of its competitors.

Where the D-Max feels best though is under load. With a 2.5 tonne powerboat on the back, the 3.0L ute sat comfortably on the road at 100km/h and there was ample power and pull on tap when needed.

We also only used a quarter of a tank towing more than 130km in mixed highway and urban conditions, with little change to our average fuel consumption figure.  The D-Max Terrain has a 3.5 tonne maximum towing capacity, and it also boasts a 1200kg payload.

The hard and bouncy suspension in the unladen rear was a constant reminder that Isuzu has designed this ute as a workhorse rather than a soccer mum mobile. That being said, it’s also child friendly with top tether points for child seats in the back.

The other give away about its tradie oriented target is the hard plastics on the inside. Aside from the stylish black patterned leather seats, there is no softness to the interior.

However, all this technology also appears to be a bit of a weak point for Isuzu. While it has all the bells and whistles you’ve come to love and expect in cars, the touch screen’s graphics are straight out of the late 1990s, with a boxy and clunky look and feel.

Exhaust Notes Australia hopes this will be one of the areas where the brand will benefit from its recently announced arrangement with Mazda for the next model.

The cabin overall is comfortable and well appointed. There is plenty of space with ample cup holders and enough width in the back seat for three adults, though it does lacks air conditioning in the back-seat area.

Overall, we’re pleased to say it’s worth a look. Even though the D-Max may lack some of the refinement of it 4×4 ute counterparts, it’s a solid, well-built and sturdy unit and worth consideration if you’re in the market for an affordable 4×4 ute.

While we’re praising them, Isuzu should also be commended for its 2016 sales figures, which saw its 2×4 variants notch up 5,038 units to put it third behind Hilux and Ranger, and 11,321 in the 4×4 market to get to sixth – a feat even more impressive when you consider there are far fewer Isuzu dealerships in Australia than rival brands.

Our test vehicle was supplied by Isuzu Ute Australia. To find out more about the 2017 Isuzu D-Max LS-Terrain, contact your local Isuzu Ute dealer.

Pros – 3.0L diesel has serious pull; value for money.
Cons – cheap and nasty feel of touchscreen graphics and interface; could do with rear air conditioning