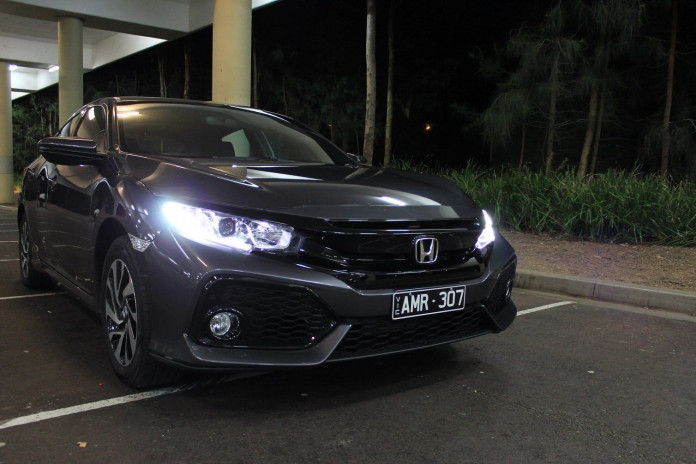 IT’S one of the world’s best known and most loved small cars, with more than 19 million sold worldwide since it was launched in Japan in 1972. Now the tenth generation Honda Civic has arrived, with sedan and hatch variants recently hitting the market.

Honda is hoping the new hatch, which is soon to be followed by a brand new Type R, and the sedan released earlier this year will renew the love Australia once had for the petrol powered front wheel drive, with the new model featuring a bold new look and some interesting package options.

The sedan and hatch VTi-S models we drove are pretty much identical, save for the fact one is obviously a hatch, with a wider opening for easier access and the storage of larger items. You’ll find good split-fold rear seats in both variants too.

From the outside, the first point to make is how great the new Civic looks in any specification. The styling of the car is unmistakable, it’s modern without being overdone. The look of the Civic should keep the Honda faithful happy while appealing to buyers that may not have given it serious consideration in the past.

The Civic VTi-S utilises Honda’s 1.8 litre 4-cylinder petrol engine. It turns out 104kW of power and peak torque of 174Nm. It’s an engine that has been around for a while, but that’s not necessarily a bad thing, it has a proven track record and is unlikely to let you down. Honda claims a combined fuel consumption of 6.4 l/100km, however the best that we could average was 7.5 l/100km, which is a real world number.

But in a move that may offend motoring purists, there is no manual gearbox option, for the first time ever. The gear changes are automatic, courtesy of a Continuously Variable Transmission (CVT). This transmission is featured throughout the Civic sedan and hatch range as a standard inclusion.

This engine and transmission combination is not a convincing setup in the 1.8 litre, the CVT was found slow and non committal at lower speeds, and when the foot found some lead to push the hatch and sedan along, engine noise at higher RPMs was loud. In fact it almost seemed as if the CVT was strangling the neck of the 1.8 litre.

Aside from the ill-fitting CVT against the 1.8 litre 4-banger, where the Civic really comes into it’s own is in the ride. The steering is accurate and well-weighted without the artificial feeling that seems to be starting to spread throughout the Civic’s competitors.

For the record, the better models in the range, the VTi-L and VTi-LX and the RS all come with a 1.5 litre turbo engine, which offers 127kW of power and 220Nm of torque, as well as improved fuel economy.

That said, throw the Civic VTi-S into a tight cover or hit a roundabout at a decent speed and the Civic sticks to the road like glue. The very refined driving experience Honda has offered is special for the hatch line up, with some minor upgrades over the sedan version. Well-proven options are utilised in the form of MacPherson struts at the front and independent multi-link suspension at the rear.

In both variants, Honda engineers have done a great job to optimise the suspension for engaging performance and a responsive feel. It’s also brilliant at minimising the transfer of lumps and bumps from poor road surfaces into the cabin. Honda has also given the Civic VTi-S plenty of standard safety kit.

It also gets smart key-less entry with push button start and automatic locking when the driver walks away from the car. The LaneWatch camera system is also standard on the VTi-S. The system uses a camera located in the left side mirror that displays an 80-degree view of what is out to the left of the car on the infotainment screen.

Some people may say that this is a clever option and it’s helpful in busy traffic to help the driver monitor a blind spot. We can see where they are coming from, however the camera engaging every time you hit the left indicator does get a little annoying.

Likewise, whilst you’re sitting at a set of lights waiting to turn left, you really don’t need to see the guard rail and anticipate if it is going jump out in front of you. The camera at night time is also dreadful. Unfortunately it doesn’t come with a night vision mode, which makes it pointless.

Having the camera display on the infotainment screen also poses an issue. You find yourself constantly taking your eyes off the road to glance over and check out what is displaying on the screen. On the plus side, you can watch what the person in the car next to you is doing, while you wait to turn left on a multi-lane road.

We like the digital driver’s display and 7-inch infotainment screen, even if the USB connection point is hidden behind the main dashboard somewhere near your knee. The touchscreen offers excellent functionality and connectivity. It’s a quality system that is simple to use and responds quickly to user commands.

The system incorporates Bluetooth for phones and audio streaming, AM/FM radio, USB, Apple CarPlay and Android Auto smartphone mirroring technology. The infotainment does require some skill in messing around with the controls if you are the front passenger trying to seize control, but for the driver, it’s all on the steering wheel.

The LCD instrument cluster with multi-function colour display replaces the usual analogue dials. It’s clear and easy to read (however a little basic). Although the style and feel of the instrument cluster does seem a little Tron-inspired. The steering wheel also doesn’t adjust.

The cabin design maximises every millimetre of the wheelbase and delivers an exceptional amount of interior space. There is plenty of legroom for those in the rear, even if those up front are on the tall side. There are no face level rear air vents, but the output from the front dash vents should be more than sufficient to keep rear seat passengers happy.

A folding centre armrest contains cup holders, and the doors have storage spaces. In the hatch variant, the rear backrest reclines at a comfortable angle, so that it feels pleasant to just sit back and relax. The cushion isn’t especially deep or well padded, but for short trips it ought to be fine.

There is no centre tunnel to hinder an adult’s enjoyment of the middle rear seat, while girth-wise the Civic’s front seats could do with a little more width. The VTi-S trim feels hard wearing but not very nice to the touch. The cloth trim in the VTi-S is marketed as premium, however, there are far better modern textiles available.

There is also plenty of room for junk in the trunk, with cargo space of 519 litres. The Civic feels spacious, and it was not that long ago that a car offering this much room was wearing an Accord badge.

The VTi-S comes in at $27,988 driveway and is available in Sonic Grey (Pearlescent), Brilliant Sporty Blue, Rally Red, Modern Steel (Metallic), Lunar Silver (Metallic), White Orchid (Pearlescent) and Crystal Black (Pearlescent). When all things are considered, the pricing does represent strong value in the context of the market segment the Civic is looking to succeed in.

Our test vehicles were supplied by Honda Australia. To find out more about either the 2017 Honda Civic hatch, or the sedan, contact your local Honda dealer.