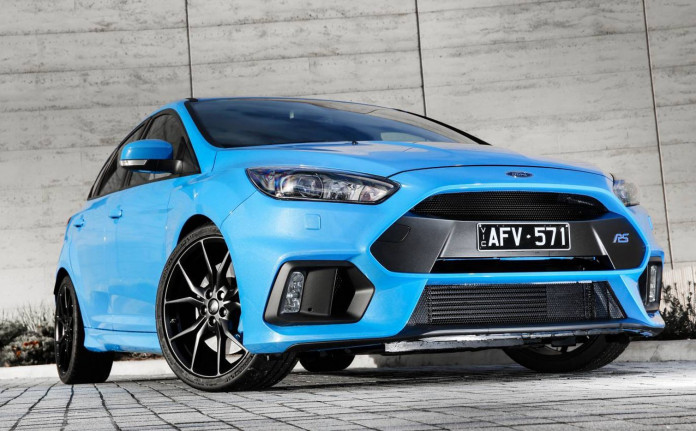 THERE is a piece of sublime, demanding and at times uncompromising tarmac road in mid-west NSW that will remain nameless for the purpose of this story on the grounds that anonymity will hopefully protect it from the gaze of our friends at the NSW Highway Patrol.

It was up on the aforementioned piece of sublime, demanding and uncompromising tarmac that the latest Ford Focus RS gave this writer a smile and an inner warmth that few cars have ever been able to match.

This old motor noter has been driving performance cars for several decades and been in awe of Mitsubishi Evos and Subarus, as well as V8 Commodores and Falcons, and more exotic Euro machines, from M series Beemers to AMG Benzes, Porsches and Ferraris.

But when things are balanced up and the value for money is taken into account, along with the performance and overall feel good factor, the RS Focus is one of the best performance cars we have ever savoured.

This is far and away the best hot hatch available on the market at the moment, particularly for its value price tag of $50,990.

This car’s poise, balance, surefootedness and punch you in the back acceleration – not to mention brakes that threaten to tear tarmac from the road – make it a very easy car to love, and not just because of that sublime 60km of road that enthralled us while testing this feisty little Ford.

For those in the know the RS stands out from the crowd with its black grille, wide black alloys, low profile Michelins, and the subtle Ford RS badging. RS has been Ford of Europe’s nomenclature for high performance machines from the days of the Escort RS1600, through various Capris to the Focuses and Fiestas of today.

The guards of the RS are also slightly flared, and there is a bigger splitter and a rear undertray to help settle the car at high speed. It has an aggressive stance and attracts attention whereever it goes.

Some have been critical of the interior describing it as cheap looking but we here at Exhaust Notes Australia tend to disagree.

Firstly, what do want for $50 grand? You are not going to get AMG or M Sport standard interiors in a car that costs less than half that of the performance offerings from Benz and BMW, but delivers as much, if not more, in performance.

The deeply bucketed front Recaros are superb, both in terms of comfort as well as support and security – and are anything but cheap. Then there are the subtle RS badges, well designed performance instruments, and Ford’s Microsoft driven touch screen audio and infotainment system. It is an interior that you can easily live with particularly at the price.

Apart from anything else this is still a five door hatch, and can still accommodate four adults easily, along with luggage or the weekly shopping.

Under the bonnet lies the 2.3 litre EcoBoost twin cam four-cylinder turbo producing an impressive 257kW and 440Nm of torque. It is the deep heart of this car and is what delivers most of the smiles.

It’s flexibility, driveability and deep wells of performance that takes the RS from a standstill to 100km/h in just 4.7 seconds. That is not much off super car status and is seriously impressive.

Power is delivered to all four wheels of the RS, with the bias being to the rear wheels; unusual for an all wheel drive hot hatch these days, however that is what provides so much of the liveliness and excitement for this chassis.

Forget paddle shifts and semi auto or AMT boxes, the RS comes with a six speed manual, like it or leave it. Ford claims that the manual saves weight over the front wheels and adds to the balance and poise of the RS, and it is balanced and poised, so there might be something in that.

Fire up the Focus, select first, give it a blip of the throttle and we have lift off. This is particularly so if you select Sport Mode on the electronic mode selection. The engine will let out a little gasping pop on up shifts as you come off the throttle to grab another gear. It is a solid reminder that this is not an eco-hatch, but is a serious performance car.

But it is not just straight-line performance that makes this car so impressive. Get it on a piece of twisty road such as the aforementioned ‘sublime tarmac’ and the RS just wants to gallop and show its true credentials as the best hot hatch around.

As we said before, most hot hatches want to under steer, but not the RS, with up to 70 per cent rear bias. However the Focus is so neutral and well mannered, with just a touch of over steer on the ragged edge, but it’s nothing that can’t be controlled easily with a touch of opposite lock and some throttle control. The old art of balancing a car on the throttle comes flooding back at the wheel of this little superstar.

The 19-inch alloys with the superb Michelin Sport Cup 2 tyres generate enormous grip levels, so much so that when you are on the extremities of grip you start to think about the consequences if  you do reach the limit. That didn’t happen during our time with the car, thankfully.

Drive the RS out of a bend with a good dab of right foot and there is just that slight amount of over steer that is just so much fun. It is very endearing and makes you want to keep finding more and more bits of twisty road to continue the feeling.

This may or may not surprise you, but we had absolutely no interest in the much publicised Drift mode. From our point of view this is just a waste of good rubber and besides, it is so much fun driving it that going around in circles with the tyres emitting a pall of blue smoke has no attraction.

The ride is a little bit hard and gets harder in Sports mode, but if you want a soft ride, buy a Focus ST or a Toyota Corolla, or something mundane. We found it easy to live with and because the damping is so good it never felt too harsh in normal mode.

You have probably realised by now we are big fans of the Focus RS and in our humble opinion it is easily the best value performance car on the market, and the best hot hatch around at the moment bar none. Do yourself a favour and try one.

Our test vehicle was provided to guest writer Jon Thomson by Ford Australia. To find out more about the 2017 Ford Focus RS, contact your local Ford dealer.