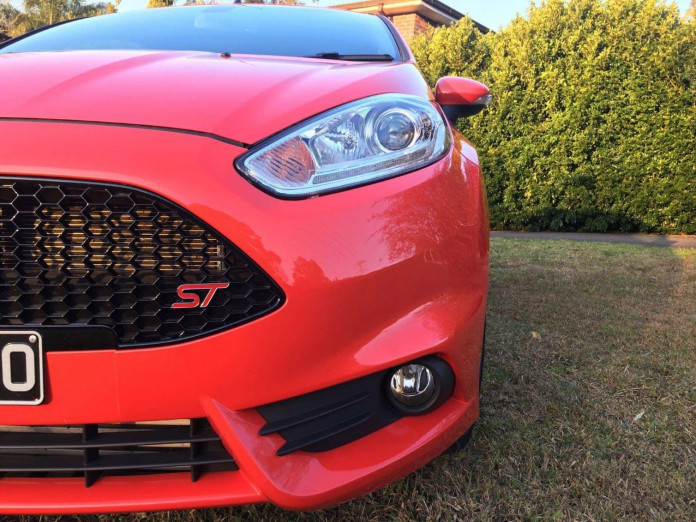 DON’T let the fact that it has Fiesta in its name fool you. There’s nothing soft about the three-door Fiesta ST, and nothing to be ashamed about driving it. Don’t let the 2017 model year fool you either, we’ll explain that later.

While it may not rate in the hot hatch space, the ST punches out a highly respectable 134kW and 240Nm delivered between 1,600 and 5,000rpm from its 1.6-litre EcoBoost direct injection four-pot.

Is it the quickest car in the world? No. Is it the sportiest? Again, no. But does it matter? No!

It begs to be taken on twisty roads. It’s not the most powerful thing but there is enough punch to make you grin from ear to ear as the turbo spools up, and enough in tow that you’ll never question its capabilities.

Corners? No issue with 278 x 23mm discs on the front and 253 x 10mm on the rear – more than adequate to arrest the weight of the Fiesta, with the added safety bonus of brake force distribution, and emergency braking assist.

What’s more; dial it back and it is an incredibly economical car, with enough torque to short shift at every chance, thus preserving fuel and allowing you to get the most from its 48-litre tank.

Oh, and when you fill up, don’t stress about not being able to find the cap. It has what Ford calls its smart fill system, that will make you feel like you should be in pit lane at Bathurst or Le Mans every time you visit the bowser.

However, unlike so many of the truly fun cars that Exhaust Notes Australia has handed the keys to, for this journo to drive, this is one you could easily have in your garage. And it’s truly affordable at $27,490.

Not only that, Ford has thrown in everything but the kitchen sink. There’s sports tuned suspension, 17-inch alloys wrapped in Bridgestone Potenza 205/40s, climate control, comfy but oh so supportive Recaro seats in the front, cruise control, sports alloy pedal covers and a sports body kit.

Typo? No, it’s all included. In fact, the only real option you get with the Fiesta ST is colour: Frozen White, Race Red, Performance Blue, Shadow Black or the ST exclusive, and pick of the mix, Molten Orange.

Alas, this tale does not have a happy ending though, as sadly, this wicked little car is in its run out phase as part of Ford’s 2017 plate clearance. On the plus side though, there will be some amazing deals on what is a seriously fun car.

Our test vehicle was supplied by Ford Australia. To find out more about the 2017 Ford Fiesta ST, contact your local Ford dealer.

Auto review: 2017 Ford Fiesta ST<strong>Pros –</strong> incredible bang for buck, loves to be thrashed yet can play nice when needed.<br> <strong>Cons –</strong> People laugh at the fact it’s a Fiesta, it’s now on run out.